WXIA-TV, virtual channel 11.1 (RF digital channel 10), is the NBC-affiliated television station in Atlanta, Georgia. Popularly known by its 11 Alive moniker, WXIA is owned by the TEGNA in a duopoly with MyNetworkTV affiliate WATL (channel 36). The station's studios and offices are located at One Monroe Place on the north end of midtown Atlanta, and its TV transmitter site is located on its own TV tower in the city's east section near Kirkwood.

The station signed on the air on September 30, 1951 as WLTV, an ABC affiliate on channel 8 (the second Atlanta station on this channel after WSB-TV moved to channel 2 a year before), by a group of Atlanta businessmen. In 1953, the station was bought by the Crosley Broadcasting Corporation of Cincinnati, who changed its call letters to WLWA (often rendered as WLW-A). This aligned their Atlanta property to Crosley's other TV stations, who took their call letters from its flagship, WLW Radio. Crosley then moved it to channel 11 to alleviate RF interference with WROM-TV, channel 9 in nearby Rome (later moved north to Chattanooga as WTVC), with channel 8 being reallocated for noncommercial educational use by the FCC in May 1960. (WGTV was started by the University of Georgia on channel 8 in 1960.)

WLWA was purchased in 1962 by Richard Fairbanks of Indianapolis as part of a settlement between Crosley and Fairbanks. Crosley had started WLWI (now WTHR) in Indianapolis in 1957, but Fairbanks insisted that the last VHF allocation in Indianapolis should go to a local owner. Eventually, the two companies agreed to what amounted to a trade, in which Crosley kept WLWI while Fairbanks bought WLWA. The Atlanta station's calls then became WAII-TV, using the slogan "The Eyes of Atlanta" and the calls standing for Atlanta's 11 (II)". The station was sold to Pacific & Southern Broadcasting of Phoenix, Arizona in 1968 and became known as WQXI-TV, aligning it with WQXI-AM and FM—the calls originally used on channel 36, currently WATL, in 1954-1955). Pacific & Southern later merged with Combined Communications. The station assumed the WXIA-TV call letters on December 25, 1973 (Christmas Day) and first used the branding 11Alive in 1976. In 1979, Combined merged with Gannett in what became the biggest media merger in history up to that time.

On September 1, 1980, WXIA became an NBC affiliate, due to market leader WSB-TV's signing with ABC. This could be traced to ratings: NBC slid to a very poor third place; meanwhile, ABC was in first place for most of the late 1970s and was seeking out stronger and better affiliates in many markets including Atlanta. So during the summer of 1980, the two stations conducted an experiment unusual for a large market: WXIA aired NBC daytime shows in the morning and ABC daytime shows in the afternoon, while WSB aired ABC shows in the morning and NBC shows in the afternoons. When the experiment was over, on that same day both stations finally swapped affiliations for good.

On June 5, 2006, Gannett agreed to purchase WATL from the Tribune Company, now affiliated with MyNetworkTV. The purchase price was $180 million. Ironically, WXIA's branding of "11 Alive" was once used by Tribune's New York station WPIX. [1]. Since WATL is not among Atlanta's four largest TV stations, the FCC permitted this sale. The sale was finalized on August 7, 2006; as a result, Gannett is now the owner of Atlanta's first television duopoly, as well as duopolies in Denver and Jacksonville.

WATL occasionally airs NBC programs when WXIA is not able to for news-related emergencies and other reasons. It also airs a half-hour WXIA newscast at 10 p.m., competing with the hour-long 10 p.m. newscast on Fox O&O WAGA-TV (channel 5), while letting WXIA air NBC'sprime-time lineup.

Also as a result of the WATL acquisition, WXIA management decided to move the studios for both stations to WATL's old location at One Monroe Place, leaving WXIA's longtime location at 1611 West Peachtree Street. WXIA and WATL began broadcasting from the new studios on July 27, 2008.

The station's digital broadcast is multiplexed into three digital subchannels, with NBC HD on channel 11.1. It was the first Atlanta station to present its local TV news in HDTV.

On 11.2 (111 on Charter and 211 on Comcast), NBC Weather Plus service was discontinued on December 1, 2008; however some stations, including WXIA, continued to air national and local radar with Weather Plus branding, supplied by The Weather Channel through the end of December. In January, WXIA rebranded the channel "11Alive Weather" and kept the "L-Bar" with weather information from The Weather Channel, but shifted the remainder of the content to a local radar loop, and eliminated the background music that aired with it. It was later rebranded as the "11Alive Weather Information Zone" or "WIZ" in 2010, along with the weather segments during newscasts on the main channel.

In early December 2010, the WIZ was moved to WATL, and now airs on channel 36.2, while 11.2 continued to air a static message graphic directing over-the-air viewers to tune there and re-scan if necessary. A month later, on January 10, the channel was removed completely from WXIA, and 11.3 became 11.2, before being reversed the following day. 11.2 could be a place holder for a future "Atlanta Nonstop" channel despite WXIA not being an NBC O&O station.

The station added Universal Sports at the beginning of May 2009 on channel 11.3. However, it uses severe video data compression, which leaves very obvious compression artifacts (blurriness and pixelation) during high-motion scenes common in sports. This low-bitrate sacrifice protects the quality of the main HD channel, and is unavoidable because Universal Sports transmits this programming via satellite in this highly compressed form (4.48 Mb/s). It is therefore not transmitted on sister station WATL (virtual channel 36.1, digital channel 25) because it would look the same there, and that station's bandwidth is being used for mobile television (ATSC-M/H), including WXIA's mobile channels. Additionally, mobile communications work better on higher UHF TV channels than on low VHF ones.

WXIA-TV and its sister station, WATL-TV have plans for Mobile DTV simulcasts of their first subchannels (11.1 and 36.1 respectively), but have not yet begun transmissions.[3][4]

11Alive has been WXIA's on-air branding since 1976, when then-owner Combined Communications adopted the practice of using the word "Alive" as part of the monikers at most of their stations. The use of "Alive" in station names was popular in the mid-to-late-1970s. New York'sWPIX TV also used the legendary "11 Alive" nickname from 1976 to 1986, as did Pittsburgh's NBC affiliate WIIC (now WPXI) from 1976 to 1979.

After Gannett acquired Combined in 1979, many of the former Combined stations stopped using "Alive" in their names, though WXIA continued calling itself "11Alive," as it had established a very strong following under that name. Fort Wayne's WPTA, another ex-Combined station, continues to call itself "21 Alive" today.

In August 1994, Gannett dropped the "11Alive" moniker as part of an image makeover. However, only a month later, WXIA began calling itself "11Alive" once again due to popular demand of its viewers.

The station previously aired a program called Noonday for many years, beginning with the news at Noon and at 12:30 continuing on for the rest of the hour with features, akin somewhat to the Today show. This was cancelled in the 2000s, but the half-hour Noon newscast is now preceded by the hour-long Atlanta & Company at 11 am, a program which has some similar features, but is partly paid for by the companies featured on it.

Currently, WXIA broadcasts a total of 27 hours of local newscasts every week (with 4½ hours on weekdays, two hours on Saturdays and 2½ hours on Sundays). Unlike most NBC affiliates, the station does not carry local newscasts in the weeknight 5 p.m. timeslot; nor does it air one prior to the Sunday edition of Today.

The station began calling itself "News Watch" for its newscasts in 1963 and began broadcasting news in color for the first time on March 20, 1967. From the early 1970s onward, channel 11's newscasts waged a spirited battle with WAGA-TV for second place behind long-dominant WSB-TV. Since WAGA switched to Fox in 1994, WXIA has been a solid runner-up, usually finishing well ahead of perennial third-place finisher WGCL-TV; however, by May 2009, WXIA's ratings had been surpassed by WGCL at Noon and 11 pm. NBC's poor prime time ratings over the past decade have not helped WXIA either. The Today in Atlanta morning news programs had experienced a 40% ratings drop, leaving them a very distant third behind the local morning shows on WSB and WAGA, and sometimes fourth behind WGCL. Nevertheless, the Atlanta market remains quite competitive, so WXIA remains a contender, albeit not as much as in the past.

WXIA also aired the NBC Weather Plus service on its digital over-the-air signal, as well as on Charter's and Comcast's digital cable system in the Atlanta area. This is now called "11Alive Weather" WXIA formerly had a partnership with The Weather Channel to use their weather forecasters and provide local weather forecasts.

The station's Doppler weather radar site is located west of Atlanta in far southern Cobb County, south-southwest of Mableton, on the south side of Interstate 20 not far west of Six Flags Over Georgia.

WXIA began airing its daily local newscasts in high definition on February 2, 2006, the first Atlanta station to do so. To signal the conversion to HD, an HD-friendly new TV studio from Production Design Group, Ltd. was built and graphics from Giant Octopus were created.

On April 28, 2010, due to Early Today beginning at 4 a.m., the debut of a new 4:30 a.m. newscast called Wake Up with Chesley features meteorologist Chesley McNeil and travel producer Matt Holmes. In addition to news updates throughout the show, McNeil primarily gives weather updates while Holmes gives travel delays and information. The music opening for the show does not use the mandated Gannett music theme. 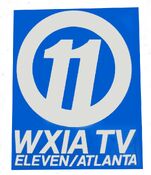 WXIA 11 Alive News 11PM Weeknight - The Investigators: Stolen: The Car That Cost A Couple Their Freedom - Friday promo for February 17, 2017