WWBT is the NBC-affiliated television station for Richmond, Virginia. It broadcasts a high definition digital signal on VHF channel 12 from a transmitter at its studios on MidlothianTurnpike (U.S. 60) in the city. Owned by Gray Television, the station operates CW affiliateWUPV (owned by Southeastern Media Holdings) through a shared services agreement (SSA).Syndicated programming on WWBT includes: Inside Edition, Entertainment Tonight, Dr. Phil, and Rachael Ray.

In the 1950s, there was competition for the market's third television frequency. WTVR-TV had been on-the-air since 1948 while WXEX-TV (now WRIC-TV) had been on-the-air from Petersburgsince 1955. The main competitors for the analog VHF channel 12 license were Larus and Brothers Tobacco Company (owner of WRVA-AM 1140, WRVB-FM now WRVQ-FM 94.5, andThe Richmond News Leader now operated by Media General). Larus later merged its application with Neighborhood Theaters' Richmond Television Corporation assuming controlling interest. Both applicants had good records and were financially qualified, but RTVC won the license since it did not own a newspaper. At the time, the Federal Communications Commission (FCC) was concerned about co-ownership of newspaper and broadcast outlets and preferred separation.

WRVA-TV signed-on for the first time on April 29, 1956. It was initially a CBS affiliate due to WRVA-AM's long affiliation with CBS Radio. That station was one of the broadcasting powerhouses of the South but that success did not transfer to its television sister. CBS moved its affiliation to WTVR in 1960 which interestingly now uses the "South's First Television Station" moniker on the side of its facilities. Since WXEX was already affiliated with NBC, WRVA was left with struggling ABC. Ratings improved in the next five years leading Larus to try to seek the NBC affiliation, a switch which occurred in 1965. The station is one of only a few in the country to have been affiliated with all three of the original major American television networks.

In 1966, the family-owned Larus and Brothers (which had acquired full control of this channel in 1960) decided to split its various interests after the company's longtime president died. Jefferson Standard Insurance Company of Greensboro, North Carolina emerged as the winner for WRVA-TV. It would have bought the radio stations as well, but at the time, the FCC did not allow common ownership of two clear-channel stations with overlapping nighttime coverage. Jefferson Standard-owned WBT-AM and Larus-owned WRVA both covered much of the eastern half of North America at night. As part of the application, Jefferson Standard requested a call letter change to the current WWBT which occurred on November 28, 1968. The new owners immediately went to work overhauling the station's look. It was already in second place in the Richmond ratings by then, but by the early-1980s, was the highest rated station in the market and one of the strongest NBC stations in the country.

By this time, Jefferson Standard had changed its name to Jefferson-Pilot Corporation. WWBT added a secondary WB affiliation in 2001 which ended on August 31, 2006 in anticipation of The WB and UPN merged to form The CW. On October 10, 2005, Jefferson-Pilot announced a merger with Lincoln Financial Group. The sale became final on April 3, 2006 with the Jefferson-Pilot stations assuming the new corporate name of Lincoln Financial Media. On November 12, 2007, that company announced the sale of WWBT along with its two other television stations and Lincoln Financial Sports to Raycom Media for $583 million. Raycom already owned rival station WTVR which had to be put on the market because the FCC does not allow one company to own two of the four largest stations in a market.

On June 24, 2008, the Sinclair Broadcast Group announced its agreement to purchase WTVR and sell Fox affiliate WRLH-TV. [1]. However, the United States Justice Department under provisions of a consent decree with Raycom Media denied that company permission to sell WTVR to Sinclair in August 2008. [2] As a result, Raycom sought and was eventually granted a temporary waiver for the purchase of WWBT to buy the company more time to find a suitable buyer for WTVR. The FCC approved the sale on March 25, 2008 and Raycom formally took control on April 1. WTVR was eventually swapped to Local TV.

On June 12, 2009, WWBT's digital broadcasts are now on channel 12. Following the switch, it applied to increase power to 26 kW stating in the application that more than 10,000 viewers complained of a sudden inability to receive the station’s digital signal particularly through antennas located indoors. Although complaints came most prominently from certain heavily-populated portions of the service area (including Western Richmond, Glen Allen, Mechanicsville, and Hanover), these reception problems were not limited to specific regions within WWBT's service area. This was also not unique to this station as viewers of other stations that switched to high-VHF band channels for post-transition operation have reported reception problems.

On September 19, 1994, WWBT entered into a news share agreement with WRLH (then owned by Abry Communications). This resulted in the area's first nightly prime time broadcast known as Fox News at 10. On January 8, 2001, the weeknight show was expanded to a full hour. Friday nights at 10:45, there is a fifteen minute sports highlight program that airs called Fox First Sports. The prime time newscasts did not face competition until March 5, 2007 when WUPV launched a 35 minute weeknight show at 10 produced by WTVR. Weekend news on WUPV began October 20, 2007 and ended a year later on October 19. The final weeknight newscast on that channel was November 7. Three days later, WTVR management announced that the WUPV operation had been canceled due to high financial costs of production.The channel started offering local newscast on the second day of broadcasting in April 1956. News department personnel initially worked out of cramped offices. In the early-1970s, renovations at the studios allowed the channel's personnel to be expanded. News operations were expanded again into a new addition to the facilities in 1978. In the late-1980s, WWBT received a comprehensive on-air upgrade featuring an updated news set and graphics package. It was the first station in Richmond to use a satellite broadcasting truck called "LiveStar 12" and a helicopter identified as "Sky 12". [3]

On March 23, 2007, "Sky 12" crash landed in a Rehoboth Beach, Delaware field after it appeared to hit power lines. Two of the four passengers were taken to a local hospital for evaluation. The helicopter was being used for non-news purposes by owner Heloair. WWBT became the first station in Richmond to air local newscasts in high definition on July 27, 2008. However, the WRLH shows were not included in the upgrade because that station lacks equipment to offer local or syndicated programming in HD. On December 17, WWBT eliminated twelve positions citing poor economic conditions. Included in the layoffs were Sports Director Ben Hamlin, news anchor Gene Lepley, along with Henrico and Hanover Counties reporter Rob Richardson.

After NBC Weather Plus shut down on December 31, 2008, WWBT-DT2 switched to a local weather channel known as "NBC 12 First Warning Weather". On January 5, 2009, WWBT began producing a weeknight newscast in high definition for WUPV called The CW News at 6:30 originating from a secondary set. The show goes up against national newscasts seen on the big three networks. In addition to operating a weather radar of its own known as "First Warning Live Doppler" at its studios, the station also uses a live feed from the National Weather Service radar based at the Local Forecast Office on U.S. 460 (General Mahone Highway/South County Drive) in Wakefield next to the municipal airport. 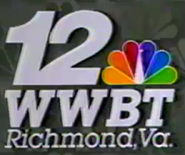 2000-present
Add a photo to this gallery

Retrieved from "https://annex.fandom.com/wiki/WWBT?oldid=398735"
Community content is available under CC-BY-SA unless otherwise noted.