WVIT-TV, virtual channel 30, is the NBC owned and operated television station for the state of Connecticut, licensed to New Britain. WVIT has its offices and studios located in West Hartford, and transmitter based in Farmington, Connecticut.

WVIT signed on for the first time on February 13, 1953 as WKNB-TV, a sister station to WKNB radio (840 AM, now WRYM). The calls stood for Kensington-New Britain. It is Connecticut's second-oldest television station, and the first on the UHF band. It originally carried mostly programs from CBS, but also carried some NBC programming as well. In both instances,WNHC-TV in New Haven often got "first call" on the best NBC and CBS programs, leaving WKNB with what programs WNHC didn't want.

In 1954, only a year after channel 30 signed on, Hartford and New Haven were combined into a single television market. However, WKNB's signal was not strong enough to cover southern Connecticut at the time--a problem that would hamper channel 30 for almost a quarter-century. WKNB became an NBC affiliate in 1955, but a few NBC programs continued to be seen in the market on New Haven's WNHC-TV for another year due to this shortfall in channel 30's coverage.

NBC itself purchased the station in 1957 and renamed it WNBC-TV (for New Britain,Connecticut). It planned to boost the station's signal to cover all of the market, but these plans never materialized. In its first stint as an NBC-owned station, channel 30 failed to gain much headway in the ratings, largely because television manufacturers were not required to include UHF tuning capability until 1964. Viewers had to buy an expensive converter to watch WNBC-TV, and even with one the picture was barely viewable. Nonetheless, NBC bought channel 30 as part of an experiment to determine whether UHF could be competitive with VHF.

In September 1957, the Travelers Insurance Company signed on independent WTIC-TV (channel 3, now WFSB), Hartford's first and only VHF station. Within a year of its debut (and despite itsradio sister having been an NBC radio affiliate for over thirty years) WTIC-TV became Connecticut's CBS affiliate, replacing its owned-and-operated station, WHCT-TV (channel 18, now WUVN). NBC then realized its UHF experiment would end up as a lost cause and sold WNBC-TV to Transcontinental Properties in 1959. Although Transcontinental Properties technically owned Channel 30, it entered into a limited partnership with the H & E Balaban Corporation (a company founded by Harry and Elmer Balaban, the two youngest brothers of then-Paramount Pictures head Barney Balaban) to operate the station. (In addition to a share of Channel 30, Elmer Balaban acquired dozens of radio stations in primarily mid-sized markets {and even launched what is today Univision O&O WQHS-DT in Cleveland, Ohio} over the next quarter-century, eventually transforming the H & E Balaban Corporation into Balaban Stations by the early-1970s.) In 1960, the calls changed again -- this time to WHNB-TV (for Hartford-New Britain). This change came because NBC wanted the WNBC calls for its flagship radio andtelevision combination in New York City.

In 1966 WHNB became, once again, one of two NBC affiliates in Connecticut: the network signed with WATR-TV (channel 20) in Waterburyin order to get its programming into New Haven on a strong (but on UHF) signal. By that time, however, new TV sets were mandated to have UHF tuners, so the practice of viewers northeast of Hartford watching NBC via WBZ and southwest of Hartford watching NBC from WNBC New York gradually ended. Channel 30 itself made up for the shortfall in its market coverage by operating two low-power translators (starting in 1971): W79AI in Torrington on channel 79 [1].

WHNB was sold to Viacom in 1978, and changed its call letters to WVIT (for "Viacom International Television") to reflect its new ownership. Viacom immediately announced plans to boost WVIT's signal. In 1980, channel 30 signed on with a new transmitter that more than doubled its coverage area, giving it a clear signal to New Haven for the first time. Even with this power boost, some areas of New Haven still didn't get a good signal, so channel 30 built a low-powered translator on channel 59 in that city. Viacom also beefed up WVIT's news operation, which had long been an also-ran behind WFSB and WTNH due to its weak signal in New Haven. After the signal boost, however, it became a factor in the ratings for the first time in decades. WVIT became the market's sole NBC affiliate in March 1982, when WATR-TV's affiliation contract with NBC ended and the station became independent WTXX (it is now WCCT-TV). The Torrington translator was turned off in 1987, and the New Haven repeater was shut down in the middle 1990s to allow full-powered WTVU (now WCTX) to begin operations.

Viacom purchased Paramount Pictures in 1994, and all of Viacom's stations became part of the Paramount Stations Group. Within the next year, following the launch of the United Paramount Network venture it co-owned with Chris-Craft Industries, Paramount/Viacom began to sell off its non-UPN affiliated stations. WVIT, which was Viacom's first station purchase in 1978, ended up being the last non-UPN outlet sold in 1997. As part of a three-way deal, which closed on December 8 of that year, WVIT was sold to former owner NBC, while Paramount/Viacom ended up with WLWC in Providence, Rhode Island and WWHO in Columbus, Ohio, two stations owned by Fant Broadcasting which NBC operated by way of local marketing agreements.

With NBC's second acquisition of the station came a greater investment into and expansion of the news department. For most of the time since the turn of the century, WVIT has waged a spirited battle with WTNH, with the two stations regularly trading the runner-up spot in the market behind long-dominant WFSB.

In August 2007; plans were finalized to begin construction of a new high-definition and "green" studio facility to replace the station's old studio, which had been in use since the station's inception. Ground was broken in October 2007, and construction was completed in Summer 2009. The new facility is located next door to the old studio on the same plot of land, and the old facility was later demolished. On July 16, 2009; WVIT re-branded from NBC 30 to NBC Connecticut HD. In addition, WVIT began broadcasting newscasts in high definition, becoming the first station in the market to do so.

30.2 carried NBC Weather Plus; national network operations for that service ended in December 2008. Currently NBC Plus airs on that channel. This utilizes the same graphics as Weather Plus, with a new 'NBC Plus' logo and without the on camera meteorologist segments.

In June 2009, WVIT left channel 30 and moved to channel 35 when the analog to digital conversion completed.[1] 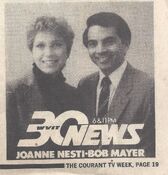 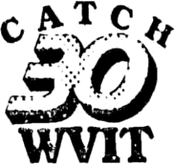 WVIT CT News 11PM Weeknight - At A Price: A Troubleshooter Investigation - This Week promo for the week of April 30, 2018

Retrieved from "https://annex.fandom.com/wiki/WVIT?oldid=394374"
Community content is available under CC-BY-SA unless otherwise noted.