WTXF-TV, virtual channel 29 (digital channel 42), is an owned-and-operated station of the News Corporation-owned Fox Broadcasting Company, based in Philadelphia, Pennsylvania. The station has its studios located in Center City, Philadelphia and its transmitter is located in the Roxborough section of the city, the station's signal covers the Delaware Valley area (Pennsylvania, New Jersey and Delaware).

Philadelphia is the largest television market where MyNetworkTV was not awarded to a Fox owned-and-operated station, as the affiliation is with WPHL-TV (channel 17). As a result, WTXF does not have a secondary affiliation with the network. Along these lines, WTXF is the largest Fox affiliate/station not part of any duopoly.

The station signed on the air on May 16, 1965 as independent station WIBF-TV, owned by brothers William, Irwin, and Benjamin Fox. The Fox brothers had already been operating WIBF-FM (103.9 MHz., now WPPZ) for several years. Channel 29's original studio was located in the Fox family's Benson East apartment building on Old York Road in the suburb of Jenkintown, north of Philadelphia. WIBF-TV was the first commercial UHF station in Philadelphia, and the first of three UHF independents in the Philadelphia market to sign-on during 1965, withWPHL-TV (channel 17) and WKBS-TV (channel 48) both arriving in September.

WIBF-TV struggled at first, in part because it signed on only a year after the Federal Communications Commission (FCC) required television manufacturers to include UHF tuning capability. In 1969, the Fox brothers sold the station to the Cincinnati-based Taft Television and Radio Company. Taft already owned WNEP-TV (channel 16) in Scranton, a station whose signal overlapped with channel 29 in the Lehigh Valleynorth of Philadelphia. Taft sought a waiver to keep both stations, since the FCC at that time normally did not allow common ownership of two stations with overlapping coverage areas, even if they were in different markets. The FCC initially granted the waiver [1], but later reversed itself and forced Taft to sell WNEP as a condition of buying WIBF-TV.

When WKBS left the air in the late summer of 1983, the station placed advertisements in TV Guide and local papers reminding Philadelphia viewers that channel 29 was still around and that channel 48's former audience was welcome to sample channel 29. But interestingly, the station passed on picking up any of channel 48's shows, most of which went to WPHL-TV.Taft assumed control of channel 29 in mid-1969 and changed the calls to WTAF-TV (for TAFt). Under Taft's ownership, WTAF soon established itself as a local powerhouse, and ran programs from Taft's archive, such asHanna-Barbera cartoons, which from 1979 onward were distributed by Worldvision Enterprises (which Taft had purchased), and later on the Quinn Martin library. By the start of the 1980s, WTAF had passed WKBS as Philadelphia's leading independent station. From the mid-1970s through the mid-1980s, it was also picked up on several cable systems on the New Jersey side of the New York City market, as far north as The Oranges.

WTAF-TV also became a strong sports station. At various times, it owned the broadcast rights to Major League Baseball's Philadelphia Phillies (Taft also owned a small portion of the team for much of the 1980s), the NHL's Philadelphia Flyers, and the NBA's Philadelphia 76ers. In the 1980s, the station also aired network shows that NBC's then-affiliate KYW-TV and ABC station WPVI-TV preempted in favor of local programming. In the fall of 1986, WTAF-TV became a charter affiliate of the fledgling Fox network.

As part of a group deal, all of Taft's independent and Fox-affiliated stations, including WTAF, were sold to the Norfolk, Virginia-based TVX Broadcast Group in February 1987. In 1988, the new owners changed the station's call letters to the current WTXF-TV. The Taft purchase created a large debt load for TVX, and as a result the company sold a number of its smaller stations. Paramount Pictures purchased a minority stake in TVX in 1989. A year later, after calling itself TV-29 for many years, the station changed its on-air branding to Fox 29. In 1991, Paramount acquired the remainder of TVX which it did not own, and the company's name was changed to Paramount Stations Group, with WTXF as its largest-market station.

Viacom gained control of the stations as part of its purchase of Paramount Pictures in 1993. In 1994 Viacom announced plans to create a new network service, the United Paramount Network, which it co-owned with Chris-Craft Industries. The initial affiliation plans called for WTXF dropping Fox and becoming the Philadelphia outlet for the new network, which launched in January 1995. Signs of the planned switch began showing up at the start of the 1994-95 season, when WTXF began calling itself simply "29". Though Fox received no official notification from Viacom that the affiliation would be canceled, the unofficial signs were enough for Fox to agree in principle to buy WGBS-TV (channel 57, now WPSG) and move its programming there.

As a Fox owned-and-operated station, WTXF immediately added more first run talk and reality shows to the schedule. Throughout the mid-to-late 1990s, WTXF was available nationally on satellite as the east coast Fox feed, most notably on PrimeStar.The planned move coincided with the biggest affiliation shuffle in Philadelphia television history. In the spring of 1994, CBS andWestinghouse Broadcasting, owners of KYW-TV, had entered into a long-term affiliation agreement, which resulted in KYW-TV dropping NBC in favor of CBS. CBS would then sell its longtime owned-and-operated station, WCAU-TV. Several months earlier, Fox entered into a multi-station, multi-year partnership with New World Communications. New World and NBC emerged as the leading bidders for WCAU, with New World intending to switch WCAU to Fox if it emerged victorious. Fox later canceled its preliminary deal to purchase WGBS and joined the bidding for WCAU, which was eventually sold to NBC. During this time, Viacom/Paramount changed its Philadelphia plans and decided to sell WTXF to Fox. Almost simultaneously, Viacom bought WGBS and made it the market's UPN station. Both transactions involving Viacom and Fox closed on the same day—August 25, 1995.

WTXF also aired the Fox Kids children's programming block from its inception in 1990 until 2002. At that point, it was replaced with theFoxBox block, which later became 4KidsTV. WTXF ran 4KidsTV until 2008, when 4Kids programming moved to The CW.

The station's branding tagline was changed to Fox Philadelphia in 1995, but in 2003 it reverted back to Fox 29 because of confusion with the Fox News Channel. WTXF also underwent a major overhaul of its building and studios in Old City Philadelphia, with a "Window on the World" type studio making its debut on June 6, 2005. The "Window of the World" studio was originally intended for Good Day Philadelphia. On October 1, 2006 the station became the second station in Philadelphia to broadcast its local news programs in high definition.

As part of the analog television shutdown and digital conversion, WTXF-TV shut down its analog transmitter on June 12, 2009,[1] and continued to broadcast on its pre-transition digital channel 42.[2] However, through the use of PSIP, digital television receivers display WTXF-TV's virtual channel as 29.

WTXF broadcasts a total of 42½ hours of local news a week (8½ hours on weekdays, and two hours each on Saturdays and Sundays), currently the most news of any major network affiliate in the Philadelphia market.

Throughout the early 1980s, WTAF aired the syndicated Independent Network News, produced by Tribune-owned WPIX in New York City. This lasted until 29 began its own in-house news department. In the spring of 1986, Taft Broadcasting opened WTAF-TV's news department with a nightly 10:00 p.m. newscast. It was the second attempt at a primetime newscast in the market, after WKBS-TV ran a short-lived program in the late 1970s. Channel 29's effort has been longest-running, and the most successful. On April 1, 1996, shortly after channel 29 became a Fox-owned station, morning children's programming was dropped in favor of a weekday morning newscast, Good Day Philadelphia.

On January 22, 2007, WTXF-TV overhauled its on-air look, adopting a logo, graphics & music similar to that of the Fox News Channel. Many other Fox-owned stations have made similar imaging changes. Channel 29 also expanded its facilities to include a new studio for its newscasts, and started to broadcast its local newscast in High-definition. With the new imaging, WTXF-TV has also expanded its news coverage.

On November 13, 2008 Fox Television Stations and NBC Local Media reached news deal in Philadelphia to test a system that will allow Fox-owned stations and NBC-owned stations to pool their news resources ranging from shared video to any aerial video from a helicopter. WTXF and WCAU were the first affiliates in the nation to undertake the plan as an effective way to deal with the difficulties in costs in news operations.[3]

Good Day Philadelphia expanded to five hours on September 7, 2009. The station also announced that former Good Day Philadelphia co-anchor (and former co-host of The Morning Show with Mike & Juliet) Mike Jerrick would return to the show to anchor from 7 to 10 a.m. starting July 27, 2009. On March 29, 2010, WTXF expanded Good Day to start at 4:30 a.m. That brings the station's weekdaily news production to 8½ hours a day.

Beginning on September 8, 2010, Kerri-Lee Halkett went on a "personal leave." Some station sources indicated that Halkett had a skin rash, prompted by anxiety over her contract not being renewed by Fox. A WTXF representative said that Halkett would once again return to her job in mid-October. However, on September 23, 2010, it was announced that Halkett would officially leave the station. Her final broadcast was on October 8, 2010; and the reason given for her departure was that Halkett desired to spend more time with her child and spouse. Later, Halkett accepted a job as a reporter for the NBC affiliate, WVIT-TV/Channel 30 in Hartford, Connecticut. WTXF replaced Halkett with Lauren Cohn who took over Halkett's co-anchoring jobs with Thomas Drayton at 5, 6 and 10 P.M. on weeknights. 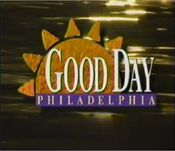 Print Logo 2007-present
Add a photo to this gallery

WTXF is carried in central New Jersey in parts of Hunterdon, Middlesex, Monmouth, Somerset and Warren counties. It is available to all customers in Ocean County with Comcast orCablevision. It is also carried in Cecil County, Maryland as well. There is no satellite coverage outside of the Philadelphia market.

On October 16, 2010, WTXF was among the Fox-owned broadcast stations and cable channels that were taken off of Cablevision's Philadelphia-area system of as the result of a retransmission dispute between Cablevision and Fox's parent company, News Corporation (who also pulled the signal of sister stations WNYW (channel 5) and MyNetworkTV affiliateWWOR (channel 9) on Cablevision's metropolitan New York system). In addition News Corporation had pulled Fox Business Network, Fox Deportes and National Geographic Wild from Cablevision systems in both the Philadelphia and New York markets. The shutdown came the morning the Phillies were set to begin play in the 2010 National League Championship Series, and also affects Fox's regional coverage of Philadelphia Eagles football games.[4]

Retrieved from "https://annex.fandom.com/wiki/WTXF-TV?oldid=398130"
Community content is available under CC-BY-SA unless otherwise noted.