WTVR-TV, virtual channel 6, is a CBS television affiliate based in Richmond, Virginia owned byLocal TV, the broadcasting arm of Oak Hill Capital Partners. It broadcasts on physical digital channel 25, using the virtual channel assignment of 6.1 via PSIP (to associate it with its 60-year former position on analog channel 6),[1] and its studios and tower are located on West Broad Street in downtown Richmond. The tower is also the transmitter for former sister station WTVR-FM and NPR member WCVE-FM.

Prior to the digital television transition on June 12, 2009, WTVR's analog audio signal could also be heard on FM radio at 87.7 MHz in most of central Virginia. This allowed listeners in automobiles, home, and through portable FM radio receivers to listen to WTVR without a television set. This is because the broadcast frequency for the analog channel 6 was uniquely positioned on the radio spectrum so that its frequency modulated audio signal coincidentally bordered the lower limit of the standard FM radio dial at 87.75 MHz. This benefit ceased to exist as a result of the cessation of the analog transmission on June 12, 2009 since the successor digital signal is not located in that same frequency space (nor would the new digital signal compatible with FM receivers if it were). The station had not indicated whether or not it will get licensed to continue its audio broadcast on that frequency.

The station became a charter affiliate of Tribune Broadcasting's new digital multicast channel Antenna TV upon its launch in March 2011. It is carried on digital subchannel 6.2.[2] The network, whose programming will consist of classic sitcoms from the 1950s to the 1990s during the afternoon and evening, and movies during the morning and late night hours, is also carried on Local TV, LLC-owned stations in other markets as well as stations owned by Antenna TV's parent company Tribune Company.

In the late morning of June 12, 2009, in compliance with the Federal Communications Commission's digital television transition efforts, the station ceased transmission of its analog television signal after more than 60 years.

WTVR arose from unlikely roots. Auto parts dealer Wilbur Havens started WMBG (which stood for "Magnetos, Batteries, and Generators"), a 10-watt station on AM 1380, in 1926 in his auto-parts shop on West Broad Street in downtown Richmond. By 1939, Havens' original $500 investment had turned into a studio on West Broad (a former bus garage), where WTVR-TV operates today. Havens brought FM service to Richmond in 1947 when he signed on WCOD-FM 98.1. No one expected him to go after one of the four channels originally allocated to Richmond for television, so it came as a complete surprise when Havens filed an application for channel 6. With no other applications to consider, Federal Communications Commission (FCC) approval was a mere formality, and WTVR took to the air on April 22, 1948 as the first television station south of Washington, D.C. For many years, it used a colorized version of its original ID slide to start its newscasts. About two years ago, an amateur videographer caught a lightning bolt striking the tower while standing outside a nearby hotel. This picture is occasionally used during weather advertisements.

In 1953, WTVR activated its tall tower, located adjacent to its West Broad studios. The 843-foot / 257 m (1049 feet / 320 m above sea level) tower is considered part of the Richmond skyline, and can be seen for several miles around Richmond. WTVR used a graphical version of the tower in its news opens for several years in the 1980s and early 1990s.

WTVR was originally a primary NBC affiliate, carrying secondary affiliations with CBS, ABC and DuMont. As it was one of the last stations to get a construction permit before an FCC-imposed freeze on new permits, it was the only station in town until 1955. That year, WXEX-TV (nowWRIC-TV) signed on from neighboring Petersburg and took the NBC affiliation. It was briefly a CBS affiliate until 1956, when WRVA-TV (nowWWBT) signed on and took the CBS affiliation due to WRVA's long history as a CBS radio affiliate. WTVR then carried on as an ABC affiliate until 1960, when CBS cut a new deal with Havens due to channel 12's low ratings. WTVR has been with CBS ever since. During the late 1950s, the station was also briefly affiliated with the NTA Film Network.[3]

Havens sold WTVR-TV, WMBG-AM, and WCOD-FM to Roy H. Park Communications in 1966, earning a handsome return on his investment of 40 years earlier. After taking ownership of the properties, the radio stations adopted the TV station's "WTVR" call letters.

When Park died in 1993, the company's assets were sold to a Lexington, Kentucky group of investors that sold the radio properties separately to various owners, with WTVR-AM-FM going to Clear Channel in 1995. WTVR-FM is still owned by Clear Channel, while the former WTVR-AM, bought by Salem Communications in 2001 and programmed as Christian talk, was later sold by Salem and is now Spanish religious station WBTK. Channel 6 began suffering in the ratings in 1994 when CBS lost the rights to broadcast National Football Leaguegames to Fox (CBS returned to NFL broadcasting in 1998). However, it recovered by the turn of the century and since then has been a solid runner-up, sometimes waging a spirited battle for second place with WRIC in news ratings.

Park merged with Media General in May 1997. However, Media General could not keep channel 6 alongside its flagship newspaper, theRichmond Times-Dispatch, because FCC rules of the time did not allow cross-ownership of newspapers and television stations in the same market. As a result, Media General swapped WTVR to Raycom Media in exchange for WJTV in Jackson, Mississippi, its semi-satelliteWHLT in Hattiesburg, Mississippi and WSAV-TV in Savannah, Georgia two months later.

WTVR was the only CBS station between Richmond and Roanoke until WCAV-TV signed on in Charlottesville in 2003.

Local features and community programs have included "For Kids' Sake", "Paws for Pets", and Battle of the Brains and a 24-hour weather news channel broadcast on broadband, digital cable, and digital sub-channel 6.2 in the area. The station carried Raycom's 24/7 music television format "The Tube" on WTVR-DT3 until its shutdown on October 1, 2007.

On November 12, 2007, Raycom Media announced its intention to purchase the television broadcasting and production properties of Lincoln Financial Media, including rival WWBT. Since FCC rules do not allow one person to own two of the four largest stations in a single market, Raycom decided to keep WWBT and sell WTVR to another owner.[4]

On June 24, 2008, Sinclair Broadcast Group announced its agreement to purchase WTVR and sell local Fox affiliate WRLH.[5] However, the Justice Department, under provisions of a consent decree with Raycom Media, denied Raycom permission to sell WTVR-TV to Sinclair in August 2008.[6]

On January 6, 2009, Raycom and Local TV LLC announced that they would be swapping stations in Richmond and Birmingham. In this deal, Raycom transferred WTVR plus $83 million to Local TV in exchange for that company's WBRC in Birmingham (a former Fox O&O, and currently a Fox affiliate). The transfer closed on March 31, 2009.[7] Local TV owns WTKR-TV, the CBS affiliate in Norfolk, Virginia, the market just to the east of Richmond. As a result of the trade, Local TV now owns Virginia's two largest CBS network affiliates.

For three months after the swap deal was completed, WTVR's Web site remained in the old Raycom-era format. This changed in late June 2009, a few days after WBRC relaunched its Web site, when WTVR migrated its Web site to the Tribune Interactive platform used by the Web sites of other Local TV-owned stations.

WTVR was the overall ratings leader in Richmond until the late 1980s, when WWBT surpassed it, mainly in local news ratings and due to strength from WWBT's affiliation with NBC and its top rated primetime lineup. During the late 1980s and early 1990s the channel won numerous awards, including the RTNDA News Operation of the Year for two consecutive years.

On August 10, 2010, starting with the Noon newscast, WTVR became the second commercial station (behind WWBT) to broadcast local news in high definition. The upgrade makes CBS 6 the only television station in Central Virginia to provide high definition video in the field, in addition to its HD studio cameras and HD weathercasts. The change also came new graphics, music and a new news set. 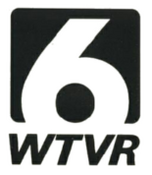 WTVR CBS3 logo from 2003
Add a photo to this gallery

Retrieved from "https://annex.fandom.com/wiki/WTVR-TV?oldid=615624"
Community content is available under CC-BY-SA unless otherwise noted.