WPXI is the NBC-affiliated television station for Western Pennsylvania that is licensed to Pittsburgh. It broadcasts a high definition digital signal on UHF channel 48 from a transmitter located on the north side of Pittsburgh. Owned by Cox Media Group, the station has studios in the Summer Hill neighborhood of Pittsburgh. Syndicated programming on the station includes Rachael Ray, Judge Judy, Jeopardy! and Wheel of Fortune.

On September 1, 1957 Channel 11 signed on as WIIC-TV, the second commercial VHF station in Pittsburgh. It was owned by the Pittsburgh Post-Gazette and immediately took NBC programming from KDKA-TV.

Bill Cardille (now a former Channel 11 host and weather forecaster) signed the station on the air. It addition to Cardille, five other announcers that were with the station during sign-on in 1957 include Mal Alberts, Bob Cochran, Ed Conway, Len Johnson and Mark Schaefer. Some of the first original programming to air on WIIC included Studio Wrestling and Chiller Theatre, both hosted by Cardille.

In 1964, the station was sold to current owner Cox Enterprises (which Cox traded its share in the then new cable system in Toledo, Ohio to the Post-Gazette's parent company, which is based in Toledo)

During much of the 1970s, WIIC trailed in a distant third place in the ratings behind KDKA-TV and WTAE-TV. This coincided with much of the period where NBC also struggled in the ratings. About 1975, Channel 11 branded itself as "e11even", then around 1977 used the "11 Alive" moniker.

On April 20, 1981, the call sign was changed to WPXI (Pittsburgh 11, with XI being the Roman numeral sign for 11). Although the station has officially never had the -TV suffix since adopting the WPXI call sign, the station has on occasion been marketed as WPXI-TV. The WIIC calls still reside in Pittsburgh, but on a low-powered independent station airing music videos.

In 2000, Cox Enterprises purchased WTOV in Steubenville, Ohio and WJAC-TV in Johnstown, Pennsylvania from Sunrise Television. These stations, also NBC affiliates often appear in channel lineups for the same viewers that watch WPXI, either by over-the-air signal or via cable provider, and due to the proximity of the three stations to each other (as well as the common affiliation with NBC), are occasionally marketed together as a result. Cox changed the stations' on-air appearances to match WPXI's look, despite WPXI changing its own look in 2004. Those stations still use WPXI's former look.WPXI also has been airing the Jerry Lewis Telethon as the Pittsburgh affiliate of the annual event. The local portion of the telethon is still hosted by Bill Cardille.

Over the Labor Day weekend of 2007, WPXI introduced its new studio location in the city's Summer Hill neighborhood near the Parkway North. The move ended a 50-year tradition at Television Hill in the city's Fineview neighborhood. The station's tower is to remain in place at the top of the station's current location.[1] WPXI officially launched its 6 p.m. newscast from its new studio in Summer Hill on October 6. WPXI is the first station in Pittsburgh broadcasting news in high definition. It has been criticized for technical glitches during the initial week of the new system run.[2][3] With the switch to HD came a new set, created by FX Group & new HD graphics, created by Hothaus Creative.

As part of its 50th anniversary, WPXI announced it would air classic TV programs on a digital subchannel from the Retro Television Network. The additional channel began on October 15, 2007.[4]

In mid-October 2008, WPXI, in collaboration with Cox's longtime partner Internet Broadcasting, launched a redesigned website. As of early November 2008, the websites of all of Cox's stations east of the Mississippi River are using the new format pioneered by WPXI; the websites of the company's stations west of the Mississippi River followed suit a month later. As of January 7, 2010, The website's navigation bar and pages have been re-done.

WPXI dropped the NBC Saturday morning cartoons in September, 1990 in favor of a newscast airing from 8 a.m.-12:30 p.m. The success of the weekend morning news prompted NBC network officials to extend the Today show to weekends. WPXI, however, has since scaled back its weekend morning news.

The station went into cable television on January 1, 1994, with the launch of PCNC - the Pittsburgh Cable News Channel. PCNC brought the first 10 p.m. newscast to Pittsburgh. The final installment of PCNC's 10 PM news aired on January 26, 2006 as WPXI took over WPGH-TV's news operation.

As of January 12, 2006, Sinclair Broadcast Group (owner of Fox affiliate WPGH-TV) and Cox entered into an agreement where WPXI began producing a newscast specifically for WPGH. This agreement, called a "news share", began January 30, 2006. All of WPGH's news staff, except for sportscaster Alby Oxenreiter, were laid off. The 10 p.m. newscast became Channel 11 News on FOX 53 at Ten. Oxenreiter's "Ox on Fox Sports Extra" fills the final 15 minutes of the newscast.

Over the past decade, Pittsburgh has been a perennially competitive market for local news, with news ratings usually differing by less than a full ratings point. More recently, however, WPXI has had a increase in most dayparts and although it continues maintain a tie with KDKA in the market for daytime news, according to the Nielsen May 2009 ratings period. Also during this period, WPXI had in increase during the morning hours and the WPXI-produced 10 p.m. news remained in first place. As of May 2010, WPXI has a strong lead with viewers in the 5-6 a.m.and 10 p.m. hours. However, WPXI is the lowest watched Pittsburgh news station in the hours of noon, 4 p.m., 5 p.m., 6 p.m., and 11 p.m. hours (with KDKA being the highest watched during those hours).[5]

WPXI currently uses the number 11 drawn into a circle, which debuted in 1987. The "11" symbol is colored gold, while the box around it is dark blue. WPXI previously used the NBC Peacock in its logo, which was copied by sister stations WTOV and WJAC-TV and is still used by those stations, but revamped its look in October 2004. WPXI's current look uses the circle 11 logo with stylized "WPXI" below it.

WPXI is known to commission its own theme music from companies, although it has previously used the famous "Move Closer to Your World" theme. It has commissioned both "Total Coverage" (its previous package still used by WJAC) and after WPXI moved to its new Summer Hill Television Building, it started using the Tower V.2, ending the NBC collection all together.

Channel 11 has had only one major foray into producing local programming. From 1963 to 1984, the station produced and broadcast Chiller Theater, a late Saturday evening horror film show hosted by Bill Cardille, or as he was referred to, "Chilly Billy." Cardille and a cast of characters would introduce the film being shown, as well as perform skits during breaks in the film. Cardille became well-known for hosting the show and the shows themselves became part of local yore. The final program aired on January 1, 1984. Cardille remained on-air at Channel 11 through the early-mid-1990s as the a.m. and noon weather forecaster. Cardille remains in Pittsburgh as midday personality on WJAS radio & occasionalChiller Theater reunions have been held over the years.

The show was part of a trend during the 1960s and 1970s for TV stations to produce local programming. Local stations often created their own children's shows as well. Horror theater shows, such as Shock Theatre, hosted by Ghoulardi & Big Chuck and Little John in Cleveland, as well as Chiller Theater, were not only easy to produce, but popular with the local audience.

For its part, WPXI (known then as WIIC) produced Cartoon Colorama, which aired old-time cartoons produced in color format (hence the name), hosted by Willie the Duck, a hand-puppet with a Donald Duck type of voice, speaking to off-camera announcer Don Riggs (who served as Willie's comedy foil) in between the cartoons. The show had been previously hosted by a character called "Captain Jim"," who'd hosted one WIIC's best-remembered children's program: "Cap'n Jim's Popeye Club," built around Popeye cartoons. The Captain was briefly played at the beginning by the little-known Jim Saunders, and from 1959 on by Ted Eckman.

WPXI Broadcasts its digital signals (HD if programming permits) over the airwaves & on cable. Standard channel 11 (e.g. NBC) programming is broadcast on 11.1

WPXI was the first channel in Pittsburgh to make use of additional programming on its digital channels. On June 21, 2007, WPXI's Weather Plus began on Channel 11.2 and was also available on digital cable.[6] WPXI 11 Weather Plus offered local and national weather information 24 hours a day. Locally, WPXI's Scott Harbaugh served as the main meteorologist on Channel 11 Weather Plus.

WPXI added an airwave digital channel on 11.3 in late October 2007 when it began an affiliation with Retro Television Network, a channel that airs classic TV programming. Sister stationsWJAC-TV and WTOV-TV also offer RTV programming on their subchannels.

In July 2009 the station applied with the Federal Communications Commission (FCC) to have three repeater signals: channel 21 in Derry Township, channel 23 in Uniontown, and channel 33 in New Castle.[7] The signal in Derry Township is expected to cover all of Westmoreland County, while the Uniontown signal could penetrate into the Pittsburgh suburb of McKeesport. The New Castle signal might go into Youngstown, Ohio (which New Castle is much closer to despite being part of the Pittsburgh DMA) and serve as a secondary NBC affiliate for the Youngstown television market, which is primarily served by WFMJ-TV, while giving the Youngstown market an outlet for RTV. Through the use of PSIP, all three signals are keepingchannel 11 as their virtual channel number. 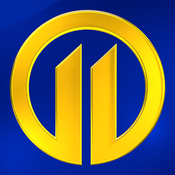