WPLG, channel 10, is an ABC network affiliated television station located in Miami, Florida. WPLG is owned and operated by Post-Newsweek Stations, a subsidiary of the Washington Post Company. The station's studios are located in Pembroke Park, and its transmitter is located at the massive broadcast tower along U.S. 441 in Miami Gardens, along with many other local broadcast stations. WPLG offers LATV on its second digital subchannel.

The station first took to the air on August 2, 1957 as WPST-TV, as the second ABC affiliate in the Miami market, under the ownership of Public Service Television, Inc., the broadcasting subsidiary of National Airlines. (Hence the call letters.) Prior to this time ABC had been carried by WITV, channel 17. With the loss of the ABC affiliation, channel 17 quickly went out of business (Channel 17 was later occupied by PBS member station WLRN-TV).

A Congressional investigation of former U.S. Federal Communications Commission (FCC) Commissioner Richard A. Mack in 1958 revealed that a Miami attorney named Thurman A. Whiteside, working on behalf National Airlines, bribed the former commissioner to obtain the WPST broadcast license.[1] As a result, WPST-TV was stripped of its broadcast license.

A group headed by Cincinnati-area broadcaster L.B. Wilson won the right to start a new station on channel 10. As part of an FCC-supervised deal, National sold WPST's assets to Wilson's group. WPST signed off for the last time on November 13, 1961. A week later, on November 20, channel 10 returned to the air as WLBW-TV (after the owner's initials). Although it operates under a separate license, it claims WPST's history as its own.[2]

The new station called itself "Colorvision 10", indicating that it was broadcasting in color. In 1967, WLBW moved to a studio facility location on Biscayne Boulevard, originally known as "Broadcast House". In 1969, WLBW (and sister station WCKY radio in Cincinnati) was purchased by the Washington Post Company's Post-Newsweek Stations subsidiary. On March 16, 1970, WLBW-TV's call letters were changed to the current WPLG, named in memory of Philip L. Graham, the husband of Washington Post publisher Katharine Graham, who committed suicide in 1963.

The station became well-known in the 1970s for its popular anchor team. From 1976 to 1982 Glenn Rinker, Ann Bishop, Chuck Dowdle and Walter Cronise anchored Newswatch 10. In 1982, Rinker left for another position in Orlando and was replaced by Mike Schneider. Schneider and Bishop anchored until 1986, when Schneider left to become the 5:30 and 11:00 pm co-anchor at WCBS-TV in New York and Dwight Lauderdale replaced him, becoming South Florida's first African-American nightly news anchor. WPLG adopted its current "10" logo in 1982. By 1985, WPLG had surpassed rival WTVJ in the ratings and would dominate the ratings for over ten years. Ann Bishop would continue to anchor the news until 1995. She worked part-time at the station until she succumbed to colon cancer in 1997. Don Noe joined WPLG in 1979 and was one of Miami's most popular chief meteorologists up until his retirement in 2007.

When WTVJ, WCIX, and WSVN all swapped affiliations on January 1, 1989, WPLG stayed with ABC. And, when WTVJ and WCIX (now WFOR-TV) swapped dial positions on September 10, 1995, WPLG remained on channel 10 as an ABC affiliate. Thus, it is the only Miami television station that has never changed its affiliation. Possibly because of this consistency, WPLG remains one of the highest rated stations in the South Florida market.

From April 2007 through May 2009, WPLG was South Florida's most-watched English-language television station which can partially be attributed to its availability in the West Palm Beach market via Comcast which in turn is damaging to ratings for WPBF, West Palm Beach's ABC affiliate. However, on April 13, 2011 Comcast pulled WPLG from the channel lineup in the West Palm Beach market. After the May 2009 ratings period WPLG went to a single anchor evening format and it's ranking fell behind CBS-owned WFOR which now holds the title of being South Florida's most watched English-language station. However, WPLG remains a strong runner-up, tied with WSVN.

On March 28, 2009 WPLG relocated its studio facilities from 3900 Biscayne Boulevard to a location on 3401 Hallandale Beach Boulevard in Pembroke Park. As a result of this relocation, none of South Florida's "Big Three" stations are based within the Miami city limits. [3][4]

On July 18, 2008, it was announced that Post-Newsweek Stations, the owners of WPLG, would purchase competing station WTVJ from NBC Universal, pending FCC approval. The purchase would have created a duopoly between the two major-network affiliates. If the sale was approved, WTVJ would have moved to WPLG's new studios in Pembroke Park. It is unknown what the future held for WTVJ's news department if the two stations combined operations.[5] However, the sale was canceled on December 23, 2008, with NBC and The Washington Post Company citing poor economic conditions and the lack of FCC approval as the reasons for the cancellation.[6]

WPLG is currently branded as Local 10 under the station standardization adopted by Post-Newsweek, requiring all stations to adopt the word "Local" in their names.

On June 12, 2009, WPLG remained on channel 10 when the analog to digital conversion was completed.[7] This and other local station which reverted (WSVN, WPXM, WLTV) required viewers to re-scan ATSC tuners (TV sets and DTV converters). It and WSVN are the only Miami stations remaining on VHF, which requires viewers to have a larger TV antenna than UHF.

As a Post-Newsweek station, WPLG continues to run nearly the entire ABC television schedule; however, the ABC Kids airings of the Power Rangers series aired on a week-delayed basis, between 5-6 AM due to the station's news commitment from 7-10 AM and the program's lack of E/I content, as well as when during that timeslot, no paid advertisements were aired. Because of this, WPLG has had in recent years moved the 9-10 a.m. hour of ABC Kids to 11 AM-1 p.m. (the recommended time slot by ABC to air Power Rangers) on Saturday mornings. The airing of Power Rangers on WPLG and ABC ended when the network dropped the program on August 28, 2010, following Saban Entertainment's repurchase of the Power Rangers franchise from Disney, ABC's parent company.

In 1988, Jeopardy! and Wheel of Fortune did air on WPLG. Another King World program, The Oprah Winfrey Show, also aired on channel 10 in 1986, but until in 1999[8], WFOR aired the show until the series finale.

Unlike most ABC stations in the Eastern Time Zone, WPLG does not carry a newscast in the 5 p.m. timeslot. WPLG deployed "Sky 10", Miami's first news helicopter in 1979. After with the move to its Pembroke Park studios, WPLG became the third Miami station to broadcast its local newscasts in high definition on March 28, 2009, during its 6:30 p.m. newscast.

Since 1993, WPLG has used several versions of Frank Gari's "The One and Only" music package, which was named after one of its long-time slogans. 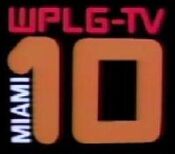 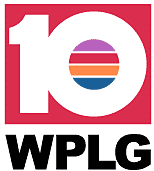 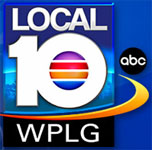 Retrieved from "https://annex.fandom.com/wiki/WPLG?oldid=398264"
Community content is available under CC-BY-SA unless otherwise noted.