WMTW is the ABC-affiliated television station for southern Maine and northern New Hampshirethat is licensed to Poland Spring, Maine. It broadcasts a high definition digital signal on VHFchannel 8 from a transmitter near West Baldwin. The station can also be seen on Time Warnerchannel 8 and in high definition on digital signal 708. Owned by Hearst Television, WMTW has studios on Danville Corner Road along I-95/Maine Turnpike in Auburn and secondary facilities and a digital translator on UHF channel 26 from the Time and Temperature Building on Congress Street near Monument Square in downtown Portland.[1] Syndicated programming on the station includes Wheel of Fortune, Jeopardy!, Dr. Phil, and Ellen.

On WMTW-DT2, Time Warner digital channel 165, and live streaming video on its website is "News 8 NOW". This is part of The Local AccuWeather Channel and features local news, weather, and sports updates. There are also national weather forecasts that are provided byAccuWeather. Several public service announcements and station promotions air on the subchannel as well.

WMTW began broadcasting on September 25, 1954 on analog VHF channel 8 under the ownership of Mount Washington Television, an ownership group that included former Maine Governor Horace Hildreth.[2] It has always been an ABC affiliate although it aired some DuMontprogramming for a year. Its sign-on made Portland one of the smallestmarkets in the country with three network affiliates on the analog VHFband. WMTW is also the longest-tenured primary ABC affiliate in New England.

The station originally aired from a transmitter on Mount Washington, which is the highest peak in the Northeastern United States. This gave WMTW one of the largest coverage areas of any station east of the Mississippi River. In addition to its main coverage area of southern Maine and northern New Hampshire, it could also be seen in parts of New York State, Massachusetts, and Vermont. The station also had significant viewership across the Canadian border inMontreal, which is almost five times as large as the population of WMTW's American coverage area. It was considered to be the ABC affiliate of record for northern Vermont and Montreal until WVNY signed on in 1968. However for some time afterward, WMTW continued to have a large audience in northern Vermont, and it stayed on most Montreal cable systems until the early-1990s.

Its transmitter tower had been originally designed in 1940 by Edwin Armstrong for one of the first FM radio stations in the country. It built a new tower there in the 1960s, but Armstrong's tower remained as a standby. Mount Washington Television sold the station to Jack Paar ofTonight Show fame in 1963.[3] Initially barred from appearing on WMTW due to contractual obligations to NBC,[3] he later hosted several programs on the station including a Thursday night movie. In 1967, Paar sold WMTW to Mid New York Broadcasting,[4] which changed its name to Harron Communications a decade later.[5][6]

WMTW had to leave Mount Washington in 2002 due to part of the Federal Communications Commission's digital television mandate. The FCC requires analog stations to broadcast alongside the digital counterparts until 80% of the viewing audience can watch the digital signal. Had WMTW-DT been built on the mountain, it would have had to operate at low power due to the lack of commercial electric power (in fact, Harron was legally the power company on the mountain). A low-powered signal would have resulted in an inadequate signal for Portland and the more populated areas of the market. WMTW built a new tower near West Baldwin and signed off from Mount Washington for the last time on February 5, 2002. Obviously, the new transmitter site does not serve as large an area as the Mount Washington tower did, but it provides a better signal to the highly populated areas of the market. Despite WMTW's departure, two FM stations continue to occupy separate broadcast facilities on the top of the mountain.

Harron announced in December 2003 that it was exiting broadcasting,[7] and the station was sold to Hearst-Argyle Television a few months later.[8] In 2007, WMTW dropped its longtime use of the -TV suffix. On June 12, 2009, it remained on channel 8 when the analog to digital conversion was completed.[9][10] The station had a construction permit for a fill-in digital translator on UHF channel 26 to serve viewers that have difficulty receiving the main signal on VHF channel 8.[11] The translator serves the immediate part of Portland and some surrounding areas from a transmitter on top of the Time and Temperature Building. On April 26, 2010, the station filed a License to Cover on the new translator which was granted by the FCC on June 1. This essentially allowed it to sign on.[12]

Several radio stations have been co-owned with WMTW. The first, on 94.9 FM, was co-owned with the television station from the radio station's launch in 1958 until 1971. This is now WHOM and continues to transmit from Mount Washington. The other two, on 870 AM inGorham and 106.7 FM in North Windham, served first as news-talk stations and later as all-news stations and were also simulcast onWLAM-AM 1470 in Lewiston. The three stations, branded as "Newsradio WMTW", aired and produced local news and talk programs as well as simulcasts of WMTW-TV's newscasts and the now-defunct news radio service of the Associated Press. The "Newsradio WMTW" stations were sold by Harron Communications to Nassau Broadcasting Partners in 2003. Soon after taking over, Nassau discontinued the format. The 870 frequency is now WLVP and simulcasts an oldies format with WLAM, while 106.7 FM is now WXTP. An earlier WMTW-FM was not connected to WMTW-TV (having predated the channel by several years) apart from also transmitting from Mount Washington.

In 2005, WMTW activated two analog repeaters. This included W26CQ in Colebrook, New Hampshire (with a transmitter northeast of the town in Coleman State Park) and W27CP in White River Junction, Vermont (with a transmitter in the Mascoma section of Lebanon, New Hampshire) to make up for lost coverage when it signed off from Mount Washington. Under normal conditions, the translators should have been built before WMTW moved off the mountain in order to comply with FCC regulations. However, Canadian communications authorities had to agree to the proposed locations for the translators, and this delayed construction until after WMTW activated its new transmitter. Colebrook is part of the Portland market, but White River Junction is considered to be part of the Burlington, Vermont/Plattsburgh, New Yorkmarket. This location is in the coverage area of NBC affiliate WNNE, another Hearst-owned station, which serves as a semi-satellite of sister station WPTZ. Although WNNE's transmitter is located on Mount Ascutney, well south of White River Junction, it operates a repeater licensed to Lebanon with a transmitter west of the town on Crafts Hill.

FCC regulations do not usually allow that two or more stations from two or more different markets have coverage of the same location (in this case White River Junction). This rule, however, does not apply to repeaters. Incidentally, White River Junction is within the fringe area of another sister station, WMUR-TV. Both WMTW repeaters were sold to New Hampshire Public Television in 2009.[13] W27CP went silent on July 15 after losing the lease on its tower,[14] while W26CQ was shut down by Hearst on September 2 in preparation for the sale.[15] The latter transmitter returned as an NHPTV relay on November 4.[16]

Throughout the years, WMTW has been ranked at a distant third behind CBS affiliate WGME-TVand NBC affiliate WCSH. The former's newscasts dominated the ratings in Portland for many years, but from the late 1980s until November 2007, WCSH took over first place. In part, this is due to the continuity in that station's key on-air staff, most of which have been with the channel for over ten years. In addition, its resources include sister station WLBZ in Bangor that allows statewide coverage not offered by any other channel in Maine. Today's ratings show a resurgence in favor of WGME in weeknight time slots. Sinclair's investment in the latest technology and state of the art weather system was instrumental in improving ratings.

On August 30, 2007, WMTW launched "News 8 NOW" on a new second digital subchannel; this is carried on Time Warner Cable's digital tier on channel 165. In summer 2008, the channel was given several awards. This included a "New England Emmy Award for Outstanding Newscast", the "Edward R. Murrow Award for Continuing News Coverage", and the "AP Station of the Year Honor". WMTW operates a 24-hour cable news station in partnership with Time Warner Cable throughout the Portland market. Known on-air as "WMTW All News Channel", this service repeats local newscasts that were seen on the main channel. It does not simulcast live broadcasts that aired on the main station; the channel instead put up a slide directing viewers to the main channel. The channel was originally on analog channel 9 and relocated to the digital tier on channel 156 starting May 5, 2009.

WMTW did not air weekend morning broadcasts until January 2, 2010, although it did produce live weather updates during Good Morning America. The station also aired a weekday midday newscast until January 8, 2010, but this was canceled and replaced by infomercials. The station promotes each of its newscasts as having the top stories and a weather forecast in the first eight minutes. Unlike most ABC affiliates, WMTW does not broadcast local news during the week in the 5 o'clock hour. The channel used to have a two-anchor sports staff. When previous weeknight sports anchor Dave Guthro shifted to the new weekend morning show and general assignment reporter duties, his position was not replaced. Currently, Sports Director Travis Lee anchors the 6 o'clock weeknight sports segment, while weeknight news anchor Tracy Sabol handles the 11 p.m. weeknight sports segment except during high school football season, when Lee also anchors the 11 o'clock Friday sports segment. The weekend evening news anchor handles the sports segment.

As of April 28, 2011, WMTW is one of four remaining stations owned by Hearst that has yet to broadcast its local news in either full high definition or even wide-screen enhanced standard definition. On October 11, the station will become the third in northern New England behind WCSH and WLBZ to air its weekday morning show starting at 4:30.[17] Regional cable news network NECN maintains a news bureau in the Time and Temperature Building, although the operations are physically separate, and the channel uses vehicles with NECN signage locally in Maine. WMTW claims to be the only Portland television station to have live Doppler radar, but it does not own or operate a weather radar of its own. Instead, it uses live NOAA National Weather Service radar data that originates from the Local Forecast Office in Gray. During weather segments, this is known as "News 8 First Warning Live Doppler". A live video feed of this system is offered on WMTW's website. 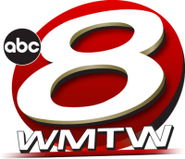