WMC-TV is the NBC affiliate television station for the Memphis, Tennessee metropolitan area. The station serves roughly the western third of Tennessee, northwestern Mississippi, northeastern Arkansas and the southeastern corner of Missouri over the air on satellite and on various cable systems. Its transmitter is located in Memphis. Action News 5 Weather Plus and This TV are offered through WMC's digital signal.

WMC-TV, Tennessee's first television station, started as WMCT on December 11, 1948 on channel 4 and broadcast from the Goodwin Institute Building in Downtown Memphis. It was owned by the E.W. Scripps Company along with the city's main newspaper, The Commercial Appeal and WMC radio (AM 790 and FM 99.7). As the only television station in Memphis for the first several years of operation, it aired programming from all four national networks of the time: NBC (primary affiliation), CBS, ABC and the now-defunct DuMont Television Network. It lost CBS when WHBQ-TV started in 1953, but continued to share ABC programming with WHBQ until 1956, when WREC-TV (now WREG-TV) began as a full-time CBS affiliate and WHBQ took the ABC affiliation full time. It lost DuMont when that network ceased operations in 1956. During the late 1950s, the station was also briefly affiliated with the NTA Film Network.[1]

It moved to channel 5 in 1952 due to interference with WSM-TV in Nashville (now WSMV), incidentally also an NBC affiliate (however, this would later make WMCT short-spaced to another Nashville station, WLAC, now WTVF, in 1954). It dropped the "T" from its callsign on New Year's Day 1967 (at the same time, the co-owned FM station changed its calls from WMCF to WMC-FM). The longtime "5" logo (resembling the one found on a five-dollar bill) debuted on this date, and would be used for over two decades. The WMC stations moved to their current location at 1960 Union Avenue in Midtown Memphis in 1959 and celebrated with a broadcast hosted by comedian George Gobel. Some of its most notable broadcasts in 1960 were live remotes of John F. Kennedy and Richard Nixon, who both came to Memphis to campaign for President. When Dr. Martin Luther King came to Memphis to support the sanitation workers' strike that set the stage for his assassination in 1968, then-station general manager Mori Greiner established an unprecedented program called "The 40% Speaks," in an effort to promote racial healing in the community.

Like many NBC affiliates during the 1970s, 1980s and 1990s, WMC-TV began pre-empting a handful of NBC shows, mostly a good part of the network's daytime lineup, for syndicated talk fare, although NBC's daytime reruns of sitcoms could often be found airing early in the morning (between 5 and 6 a.m.). In 1979, in an effort to build its viewership for The Today Show, WMC created a lead-in program titled Wake-Up Call. For the first three years it was hosted by Dick Hawley and Peggy Rolfes. Denise DuBois replaced Rolfes in 1982 and co-hosted for the next ten years. By the mid-1980s, Wake Up Call was the highest-rated local TV talk show in the U.S., with a 52% share of the viewing audience.

After many years of solid management, Scripps sold WMC-AM-FM-TV to Ellis Communications in 1993; Ellis in turn sold to a new broadcasting group formed by the Retirement Systems of Alabama, and subsequently named Raycom Media, that also purchased AFLAC's broadcasting unit in 1996; Raycom sold the radio stations off in 2002.

One of the station's first broadcasts was a live football game at Crump Stadium in Memphis. WMCT first broadcast wrestling by stringing cables across the street from its studio to Ellis Auditorium (no longer standing) in downtown Memphis early in the 1950s. Wrestling returned to Channel 5 in 1977, after some years on WHBQ-TV, and for many years the very popular live in-studio professional wrestling program was broadcast live on Saturdays from 11 a.m. to 12:30 p.m. Some of the wrestlers became regional celebrities from their exposure on the program, perhaps most notably Jerry "The King" Lawler, whose fame earned him his own locally-produced TV sports show, seen on channel 5 on Sundays during the 1980s[2]. The wrestling show eventually became the last remaining program of its kind in the U.S., before its cancellation in the 1990s. (It might be noted that independent wrestling promotions are sometimes seen on local television stations to this day, but they most often are shows made from footage of local house shows, not broadcast live from the studio.) Long before nationalPGA Tour broadcasts began, WMC-TV broadcast live professional golf from the Memphis Open, with a three-camera remote truck providing coverage from three greens.

Another popular local series was Magicland, a live-audience magic series for children, hosted by WMC-TV anchor/announcer Dick Williams. Magicland aired Sunday mornings at 10 a.m. from 1966 until "Mr. Magic" retired in 1989. It is cited in the Guinness Book of World Records as the longest running magic series in television history, having amassed 1200 original episodes in its 23-year run.

On December 9, 2008, Raycom Media, WMC-TV's parent company, announced staff cuts. According to WMC's website, the cuts came after a tough economic year for the media industry, as well as forecasts for continued difficulty in 2009. Raycom terminated employees nationwide, including 15 at WMC-TV. Those cuts included morning anchor Bill Lunn, evening news anchor Donna Davis, and sports anchor Dave Cera.Recently, the station's newly renovated newsroom was named after long time employee Ed Greaney, who died June 19, 2005. Greaney began at WMCT in 1949, only two months after the station started operations and worked until late 2000. In October 2006, WMC debuted a fresh news set, along with updated graphics and music. The set makeover was the first at the station since 1995.

Syndicated programming on WMC-TV includes The Rachael Ray Show, Who Wants to Be a Millionaire, Dr. Phil, The Oprah Winfrey Show and Wheel of Fortune.

On July 2, 2008, WMC-TV became the first Memphis television station to broadcast its local news programming in High Definition, and only the second station in Tennessee to do so (behind WTVF in Nashville).[3]

WMC has included, since at least the 1950s with its logo an illustration of a riverboat, a symbol of the Mississippi River region which the station serves. For many years, the station's sounder included the riverboat's whistle--something which dates to the 1930s on its former AM sister. The whistle is still heard at the opening of WMC-TV's current newscasts. The station was known as: "The Showplace of the South" during the 1960s.

WMC's current logo resembles the same style of logo also used by Cox's stations WSB-TV Atlanta, WHIO-TV Dayton and KIRO-TV Seattle. This graphics package was adopted when long time Atlanta businessman Bert Ellis purchased WMC-TV, Raycom Media and several other stations in 1993 to create Ellis Communications. Ellis was a long time fan of WSB-TV and subsequently styled his new broadcast chain after WSB-TV. Under Ellis, two of WMC's siblings adopted the logo style as well: KSLA in Shreveport and WECT in Wilmington, both of which use modified versions today. 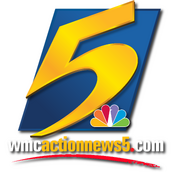 Retrieved from "https://annex.fandom.com/wiki/WMC-TV?oldid=394372"
Community content is available under CC-BY-SA unless otherwise noted.