WLEX-TV, channel 18, is the NBC affiliate for Lexington, Kentucky and the East-Central Kentucky region. Its transmitter is located in Southern Lexington near Hamburg Pavilion on WTVQ-DT's tower. WLEX-TV's studio is on Russell Cave Road in northern Fayette County.

Channel 18 signed on March 15, 1955 as Lexington's first television station and the third in Kentucky (following Louisville's WAVE-TV andWHAS-TV). It was co-owned with WLEX radio (1300 AM, now WLXG) and carried programming from all four networks (NBC, ABC, CBS, andDuMont). The DuMont network went out of business later that year. In 1957 ABC programming moved to WKXP-TV (channel 27, now WKYT-TV). In 1968 CBS moved to WKYT when WBLG-TV (now WTVQ-TV) signed on and took the ABC affiliation, making WLEX a full-time NBC affiliate.

In November, 2009, it was announced that WLEX has partnered with online sports site Wazoo Sports to form the Wazoo Sports Network. The new regional television network will be dedicated to carrying live coverage of Kentucky High School sporting events, as well as classic coverage of past high school & college events. The network can be seen on the Lexington-area digital cable outlet, as well as on WLEX digital subchannel 18.2.[1][2]

At 7am EDT on June 12, 2009, WLEX-TV's digital signal remained on channel 39 when the analog to digital conversion was completed. The digital signal originates from the tower that also transmits the WTVQ-TV signal.[5] [6]

In the Spring of 2007, WLEX-TV became the second station in Lexington and the entire state of Kentucky to broadcast local newscasts in high definition, and it debuted a new set in preparation for the transition. The station had used their famous "Skyline" set for 12 years until they updated it in May 2007. The station uses 615 Music's In-Sink as its news music package, which they have used for 11 years. WLEX's graphics are made by Giant Octopus and feature the NBC peacock logo.

LEX 18 News has brought Central Kentucky live coverage of the Kentucky Derby since 2000 when LEX 18 signed a contract with NBC Sports. In 2005, LEX 18 Renewed the contract and they are still bringing All-day coverage of the Derby with their "Derby Crew". No other Lexington stations currently broadcast Derby Day coverage due to contract rights.

Out of Market Coverage

In Tennessee, WLEX and many other Lexington television stations are carried in Jellico. WLEX is also available in Ashland, Kentucky, which is in the Charleston/Huntington, West Virginia market. 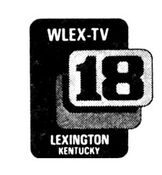 Retrieved from "https://annex.fandom.com/wiki/WLEX-TV?oldid=612197"
Community content is available under CC-BY-SA unless otherwise noted.