WKRN-TV, branded as News 2 and broadcasting over-the-air on digital channel 27 (virtual channel 2.1), is the ABC affiliate television station in Nashville, Tennessee. It is owned by Young Broadcasting under the operation of Gray Television. Its transmitter is located in Brentwood, Tennessee.

The station first signed on the air on Channel 8 on November 29, 1953 as WSIX-TV, the second television station in Nashville. It was owned by Louis and Jack Draughon along with WSIX-AM 980 (now WYFN-AM, a religious station). The calls came from the 638 Tire Company in nearby Springfield, where the Draughon brothers had started WSIX-AM in 1930; neither the radio nor the television stations have ever had the number six in their frequencies, which would explain it otherwise. Originally a CBS affiliate sharing ABC with WSM-TV (now WSMV), it became a full ABC affiliate after only one year when WLAC-TV (now WTVF) signed on and took the CBS affiliation due to WLAC's long history as a CBS radio affiliate. During the late 1950s, the station was also briefly affiliated

with the NTA Film Network.[1]

Its original studio was on Old Hickory Boulevard, just outs

ide Nashville. In 1961, WSIX-AM-FM-TV moved to a new studio located at 441 Murfreesboro Road, where the TV station is located today. The current WKRN studios is where the Wilburn Brothers' television program, a Show Biz Inc., production, was produced during the 1960s and 1970s.

WSIX-TV, however, did not have much luck against WSM and WLAC. Part of the problem was a weak signal, as its transmitter was short-spaced to channel 8 in Atlanta--occupied first by WLWA-TV (now WXIA-TV) and currently occupied by WGTV. WSIX was also hampered by a weaker network affiliation (ABC was not truly competitive with CBS and NBC until well into the 1970s).

The Draughons sold WSIX-AM-FM-TV to General Electric in 1966. In 1972, GE cut a deal with Nashville's PBS station, WDCN-TV (nowWNPT), then on channel 2, to swap dial positions. GE did this because the channel 2 signal travels farther than the channel 8 signal under most conditions. The swap occurred on December 11, 1973, in the middle of evening prime-time programming. At the same time, even though General Electric still owned WSIX-AM-FM, it changed WSIX-TV's callsign to WNGE-TV (for Nashville General Electric), leaving the radio stations' call letters intact. This was only the third facility swap in American television history.

Knight Ridder bought WNGE-TV in 1983 and changed the calls to the current WKRN-TV. Young Broadcasting bought the station in 1989. It is merely a coincidence that the call letters reflect Young Broadcasting's flagship outlet, KRON-TV in San Francisco. Like all other ABC affiliates owned by Young Broadcasting, WKRN preempted ABC's broadcast of the movie Saving Private Ryan in 2004.

In August 2009, Gray Television took over management of WKRN as a consequence of the bankruptcy of Young Broadcasting, who continues to hold the license and facilities of the station.

In 2009, WKRN-TV turned off its analog transmitter and remained on its pre-transition channel 27.[2][3] However, through the use of PSIP, digital television receivers display WKRN-TV'svirtual channel as 2.

The station has an agreement with the Tennessee Titans to air Bridgestone Titans on 2 with Jeff Fisher, the team's coach's show from 8pm-9pm Tuesday evenings, pre-empting ABC programming in that timeslot during the NFL season (which has featured low-rated and critically drubbed sitcoms for the majority of the 2000s).

The station received heavy criticism from viewers in November 2009 for not airing V at the network's original timeslot. V then aired early Wednesday mornings after Jimmy Kimmel Live![4]. WKRN claimed the thirteen-year agreement to air the coach's show does not allow for the moving of that show to accommodate high-demand network programming without notice months in advance. However, in the past the program has moved at times to accommodate other high-demand programs such as Dancing with the Stars during the early portion of the season and network holiday programming. The station also reversed a plan to air V over NashvilleWX on digital channel 2.2 at 8 p.m. on Tuesdays the day before the premiere. WKRN's sister station in Green Bay, WBAY-TV (coincidentally, also broadcasting on virtual channel 2) also faced the same situation with a locally produced football program covering the Green Bay Packers NFL team, but after a week moved that program to air before primetime to accommodate V.

The two main evening news anchors, Bob Mueller and Anne Holt, have been associated with WKRN since the early 1980s. WKRN is also the only traditional network affiliate in Nashville that does not run an hourlong newscast at 6 p.m., although its newscasts for the evening begin at 4 p.m., including ABC's World News with Diane Sawyer at 5:30 p.m.

WKRN is one of the two network-affiliated stations in this market that have not switched to high definition local newscasts as of yet, along with Fox affiliate WZTV (channel 17). 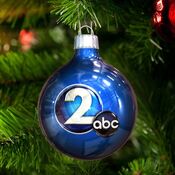 Retrieved from "https://annex.fandom.com/wiki/WKRN-TV?oldid=451572"
Community content is available under CC-BY-SA unless otherwise noted.