WKMG-TV channel 6 is the CBS network affiliate for Central Florida (the Orlando-Daytona Beach-Melbourne, Florida market). WKMG is licensed to Orlando and is owned and operated by Post-Newsweek Stations, Inc., a subsidiary of the Washington Post Company. The station refers to itself as "Local6". WKMG's transmitter is located in Bithlo, Florida. WKMG's studios are located on John Young Parkway.

WKMG clears most CBS programs, but pushes back the start of The Late Late Show with Craig Ferguson by a half-hour. Syndicated programming on the station includes Rachael Ray, Inside Edition, Dr. Phil and Extra.

The station first took to the air on July 1, 1954; as WDBO-TV, which stood for "Daytona Beach Orlando", But locals would call it "Way Down By Orlando." It is the sixth-oldest station in Florida, and the oldest in Central Florida. It was originally owned by the Orlando Broadcasting Company along with WDBO radio (AM 580 and FM 92.3, now WWKA).

As the only station in the market at its inception, it originally carried programming from all four networks of the time — CBS, NBC, ABC and DuMont. DuMont would shut down most network operations in 1955, but honor network commitments until 1956; at that point, DuMont disappeared from the schedule. It lost NBC when Daytona Beach's WESH expanded its signal to cover all of Central Florida in 1957, and ABC when WLOF-TV (now WFTV) signed on in 1958.

Orlando Broadcasting merged with Cherry Broadcasting in 1957. In 1963, WDBO-AM-FM-TV were sold to The Outlet Company.

In 1982, WDBO AM-FM was sold to Katz Broadcasting, as Outlet decided to begin exiting radio. Outlet was nearly bought out by Columbia Pictures around the same time. In advance of this, channel 6 prematurely changed its call letters to WCPX-TV, which stood for "W Columbia PiX" (shorthand for "Pictures"). While the deal fell through, channel 6 kept the WCPX calls for 16 years.

Outlet pared down its holdings after a buyout in 1986, selling off many stations. At that point, WCPX was sold to First Media, Inc.

In the early 1990s WCPX decided to move the CBS program Picket Fences from Friday evening to 11:35 pm on Saturday so that it could air Star Trek: The Next Generation on Friday evenings. WCPX also pre-empted some CBS sports programs as well. In 1994, WCPX hired a new general manager, Brooke Spectorsky, from WUAB in Cleveland. (Spectorsky is now general manager of WKYC-TV in Cleveland.) Under Spectorsky, WCPX put Picket Fences back at its normal time.

In 1995, WCPX was one of the first CBS affiliates to air Guiding Light at 10 a.m. instead of 3 p.m., which was the normal time to air it. Under this arrangement, the program would air on a one day delay. However, CBS soon discovered that several of its O&O's were doing the same thing. CBS then decided to provide two (eventually three) same day feeds of Guiding Light to its stations (one at 9 a.m., 10 a.m., and 3 p.m.). WKMG aired Guiding Light at 9 a.m. up until September 18, 2009. It currently airs Let's Make a Deal at 9 a.m.

[1][2]WKMG-TV logo from 1998In 1997, First Media merged with Meredith Corporation, which already owned Fox affiliate WOFL. At the time, duopolies were not allowed, and Meredith decided to keep WOFL (which has since been sold to Fox). In mid-1997, Meredith swapped WCPX to Post-Newsweek Stations in exchange for Hartford, Connecticut's WFSB (which at the time was Post-Newsweek's flagship). On January 30, 1998, the station changed its callsign to WKMG in honor of longtime Washington Post publisher, Katharine M. Graham. As of recently, WKMG is the last "Big Six" affiliate in Orlando that is not part of any television duopoly (Fox/Newscorp's WOFL/WRBW, Cox's WFTV/WRDQ and Hearst-Argyle's WESH/WKCF).

WKMG transmits its digital signal on channel 26. Through the use of PSIP, digital television receivers display WKMG-TV's virtual channel as 6.1.

From the late 1980s until 2001, the station was almost always in last place in the ratings. At the same time, WESH and WFTV battled for first place in the Orlando market, and basically continued to do so into the early 2000s; however, in the past few years, WFTV has become the dominant station (though channel 6 claimed first place at 11 p.m. in the May 2006 ratings period). Management changes had a number of GMs on the treadmill with Mike Schweitzer, Kathleen Keefe, Jeff Sales and Henry Maldonado all taking a turn at the top. News and Sales Departments had similar turnover with at least 5 News Directors taking the chair between 2000 and 2008. Sales Managers included Connie Albino for a short tenure before being replaced by Tom Calato.

Internet Broadcasting Systems provided the Internet site named "myCFnow.com" by Sales; it then switched to "local6.com", and is currently known as "clickorlando.com". Currently, despite the strength of CBS prime-time programming, WKMG has been trading second and third place with WESH in the evening newscast ratings except at 11 p.m., where until recently it waged a spirited battle with WFTV for first. From late 2007 until March 2009, WKMG's 11 p.m. newscast was in second place behind WFTV. Continuing its ratings slide, the May 2009 sweeps found WKMG's newscasts finishing in third place in all time slots, behind WFTV and WESH. In fact, despite being number one in prime time WKMG's late night newscast has failed to hold on to its lead-in audience for the most part. The siphoning off in news audience share appears to have held in the November 2009 sweeps period, when WKMG remained in a distant third place weekday evenings while its morning and late night newscasts improved slightly although still in a distant second place.

The main news anchors at WKMG currently are Erik von Ancken and Lauren Rowe; they anchor the 6 and 11pm newscast. Rowe moved to help co-anchor the morning news with Erick Weber before returning to nights, joining former news anchor Mike Garafalo for the 11 p.m. news. Reporter Laura Diaz now anchors The Morning News with Erick Weber. Before May 1, 2009, former news anchor Jacqueline London anchored the 4, 5, 6, and 11 p.m. newscasts with Garofalo and solo anchored the 5:30 p.m. newscast.

In 2008, WKMG-TV began broadcasting its news in SD 16:9 widescreen format. WKMG is currently the only major station in the Orlando market which has yet to upgrade its newscasts to full high definition. In addition, it is the only station in The Washington Post Company's six-station group which does not claim to be broadcasting high-definition newscasts.

For the February 2012 sweeps, WKMG took first place in the 25-to-54 demographic at 11 p.m., beating WESH by 5,000 viewers and WFTV by 5,700 viewers.  On June 2, 2012, WKMG became the last major television station in the Orlando market, as well as the last Post-Newsweek owned station, to upgrade its newscasts to full High-definition television.

On August 28, 2015, WKMG dropped the "Local" branding from their name and began calling themselves "News 6."  On September 7, 2015, WKMG relaunched their 4 p.m. newscast with Julie Broughton as anchor.

In April 2010 News Director Steve Hyvonen called for a "Newsroom Summit," and required his employees to vote for three employees who would be considered "Battery Drainers." Nomination of management was exempted from the vote.[1]

[3] This film, television or video-related list is incomplete; you can help by expanding it with reliably sourced additions. 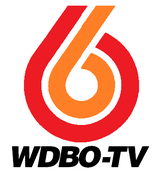 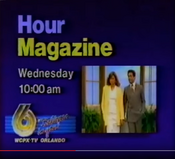 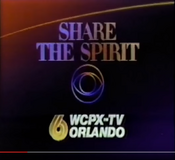 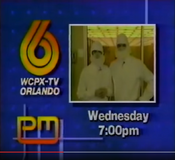 WKMG News 6 4PM Weekday open from September 4, 2017
Add a photo to this gallery

Retrieved from "https://annex.fandom.com/wiki/WKMG-TV?oldid=618219"
Community content is available under CC-BY-SA unless otherwise noted.