WKEF, virtual channel 22, is the ABC-affiliated television station for the Miami Valley area ofOhio, which is licensed to Dayton. It broadcasts a high definition digital signal on UHF channel 51 from a transmitter at their Broadcast Plaza studios near the New Chicago section of the city. Owned by the Sinclair Broadcast Group, WKEF operates Fox affiliate WRGT-TV and itsMyNetworkTV/This TV second digital subchannel (owned by Cunningham Broadcasting) though a local marketing agreement (LMA). However, Sinclair effectively owns the station due to Cunningham's ownership structure. Syndicated programming on this station includes: Family Feud, Rachael Ray, Who Wants to Be a Millionaire, Judge Judy, Oprah (formerly on WDTN), and The Dr. Oz Show.

The station's digital channel is multiplexed.

It signed on August 22, 1964 as WONE-TV owned by Brush-Moore Newspapers along withWONE-AM. Conventional wisdom suggested that it would take the ABC affiliation since it was Dayton's third commercial station. Before 1964, ABC programming came to Dayton by way of selected carriage / secondary affiliation on NBC affiliate WLWD (now WDTN). In addition, viewers could watch the full ABC schedules on WKRC-TV in Cincinnati and WTVN-TV (nowWSYX) in Columbus both of which decently covered Dayton. Under these circumstances, ABC initially balked at giving even a secondary affiliation to WONE, forcing the station to make a go of it as an independent until late-1965. Another consideration may have been that many Dayton viewers didn't have UHF-capable sets at the time. The Federal Communications Commission(FCC) had just required television set manufacturers to include all-channel tuning months earlier.

In 1965 however, under new owner Group One Broadcasting, WONE began running ABC prime time shows and sports plus any daytime network shows that WKRC or WTVN preempted or WLWD (until 1971) did not carry. Soon after the station joined ABC, it was sold toSpringfield Television Corporation (owner of WWLP in Springfield, Massachusetts) and renamed WKEF. By 1978, ABC had become the nation's most-watched network (with shows such as Happy Days) and was unhappy with the Cincinnati–Dayton arrangement. WKRC and WTVN were both preempting decent amounts of daytime programming, late night shows, and some of the Saturday morning cartoons. ABC wanted a station in Dayton that could run its whole schedule and be able to reach Cincinnati and Columbus. It also wanted a station that had local news. Although the station did eventually launch a news department, it was not enough to save its affiliation with ABC.

For many years, WKEF produced the daily children's program Clubhouse 22 hosted by Malcolm MacLeod in the early-1970s with Joe Smith taking over in the mid-1970s. Their cohorts included Duffy the Dog, Stan The Man, and later Dr. Creep (Barry Hobart). The theme song of the program was to the tune of "High Hopes" and included the lyrics "Joe and Duff on Clubhouse 22!"

In late 1979, ABC began talks with WDTN and agreed to move its Dayton affiliation there when WKEF's contract ran out at the end of the year. The change took effect on New Year's Day 1980. Almost by default, WKEF was then left to take the NBC affiliation. Unlike its ABC deal, WKEF now ran NBC's entire schedule. Even with the affiliation swap, it remained in the ratings basement. NBC also lost market share in the Dayton–Springfield area to stronger affiliates in Cincinnati (WLWT, who has a city-grade signal in Dayton and a Grade B signal as far north as Piqua) and Columbus (WCMH-TV, who has a Grade B signal in Springfield and as far north as Bellefontaine). In 1984, the Springfield Television group (WKEF, WWLP, and KSTU in Salt Lake City, Utah) was sold to Adams Communications. That company broke up the group in the late-1980s selling WKEF to KT Communications in 1989. Neither owner was able to get WKEF out of last place. Even with NBC's powerhouse primetime lineup in the 1980s and early-1990s, it was the third station in what was basically a two-station market. Part of the problem was a primitive on-air look.[citation needed]

KT sold WKEF to Max Television (later Max Media Properties) in 1995. KT had invested millions in new equipment, updated the on-air look, and hired almost a completely new staff. Ratings improved but WKEF remained a distant third in the ratings behind WHIO-TV and WDTN. In 1998, WKEF was sold to Sinclair in a group deal. Sinclair was already managing WRGT, owned by Sullivan, and Sinclair moved WRGT's operations into WKEF's studios. In 2001, Sinclair bought most of Sullivan's stations but could not buy WRGT because the FCC does not allow common ownership of two of the four highest-rated stations in a market. Also, the Dayton market has only six full-power commercial stations which is too few to permit duopolies. Accordingly, WRGT was sold to Glencairn, Ltd. However, this was a sale in name only as Glencairn's stock was almost entirely owned by the Smith family founders of Sinclair. This effectively gave Sinclair a duopoly in Dayton. Glencairn, now known as Cunningham Broadcasting, still owns WRGT today as one of several arrangements that has led to allegations of Cunningham being merely a shell corporation for Sinclair. This is exactly the same arrangement and same affiliation pair that Sinclair has in Columbus: ABC affiliate WSYX and Fox affiliate WTTE.

On August 30, 2004, WDTN again took the opportunity to sign up with the more popular network, dropping ABC to switch back to NBC. Thus as of August 2004, WKEF became an ABC affiliate again. WKEF now runs the entire ABC schedule. Only a few months after becoming an ABC affiliate again, the station and all other Sinclair-owned ABC affiliates including sister WSYX in Columbus as well as two other ABC affiliates in Ohio preempted the movie Saving Private Ryan. That decision was made due to the network's plan to air the R-rated film unedited, potentially exposing its affiliated stations to FCC scrutiny if viewers complained about the film's graphic violence and coarse language even though some of Sinclair's stations had already shown the film unedited and uncensored a few months earlier. The incident landed Sinclair at the center of a mild controversy fueling the debate over whether the context of such material should be considered in determining broadcast indecency violations.

WKEF discontinued regular programming on its analog channel, 22 (UHF), on June 12, 2009, as part of the DTV transition in the United States.[1] Regular programming remained on its digital channel, 51,[2] which uses PSIP to display its virtual channel as 22. WKEF aired anightlight message on its analog channel for two weeks following the DTV transition deadline. After that, analog transmissions on channel 22 continued, except now at low power, rebroadcasting WRGT-DT2's MyNetworkTV and This TV programming. Initially, this new low-power analog broadcast operated under Cincinnati sister station WSTR-TV's Dayton translator license, W66AQ (formerly on channel 66). On June 30, 2010, W66AQ's call letters were changed to W22DE. On December 8, 2010, Cincinnati's WCPO-TV moved its digital operations to channel 22, knocking W22DE off the air. The plans for W22DE are currently unknown.

During the station's early years, channel 22 had no local newscasts. WKEF established a news department in mid-1972 in response to licensing requirements with two weeknight broadcasts in mid-1972. Mark Pierce was named News Director, with anchor John Getter, sports from Billy McCool, and meteorologist Virginia Bigler. Bigler was granted the American Meteorological Society Seal of Approval based on her weather segments, becoming the second female meteorologist in the United States to receive this. The news department was discontinued after the Xenia tornado in 1974. The final Eyewitness News at 11 was anchored by Paul Douglas (Wilson) who had joined the WKEF staff as an anchor, reporter, and producer in 1973.

From 1974 to 1979, WKEF decided against airing its own newscasts possibly owing to low ratings. It relied instead on brief audio-only news updates from newscasters from local radio station WING-AM. It ran these updates at selected times in the morning, afternoon, and evening using a still slide on-screen with a picture of the newscaster. WKEF brought back full news programs in 1979 under the moniker 22 Alive! News with anchors Tom Miller and Jack Marschall.

In August 2008, FOX 45 Dayton's News Source at 6:30 was added to WRGT-TV, airing on weeknights against the national news broadcasts on the "Big Three" stations.

In terms of ratings, WKEF's newscasts have always been a distant third place behind WHIO and WDTN. However, on some nights (usually Sundays because of ABC programming) there are times that WKEF is runner-up to WHIO. WKEF did not participate in the wider implementation of Sinclair's now-defunct, controversial News Central format for its newscasts but did air The Point, a one-minute conservative political commentary hosted by Mark E. Hyman, that was also controversial and a requirement of all Sinclair-owned stations with newscasts until the series was discontinued in December 2006.

As of July 21, 2012, with WDTN's upgrade to high definition local newscasts, WKEF and WRGT-TV remained the only two "Big Four" network-affiliated television stations in the Dayton area that continued to broadcast their newscasts in pillarboxed 4:3 standard definition. WHIO-TV was the first to have made the upgrade to full high definition. Dean Ditmer, general manager of the stations, announced that WKEF and WRGT-TV would upgrade to HD in 2012 with a new set;[55] the existing set had been in use since January, 1995.[citation needed] On October 29, 2012, the stations began constructing their new set at their future Corporate Place studios.[citation needed] HD newscasts from the new studios began on January 27, 2013.[32][33]

In August 2015, the station began branding its newscasts as FOX 45 News on ABC, using its sister station's branding. In September 2018, the station returned to using ABC 22 News.

The station made national headlines on May 28, 2019 when a video surfaced of the station's news department cutting into the previous night's airing of The Bachelorette for a breaking news story on a tornado warning in the area, and meteorologist Jamie Simpson firing back at social media complaints about the preemption by stating that saving people's lives was more important than an episode of The Bachelorette.[56] Simpson later apologized for his rant but said he did not regret the station preempting the series in favor of safety; Bachelorette contestant Hannah Brown sided with Simpson. Some viewers also sided with Simpson and said that they appreciated "putting those complaining in their place". As tornadoes did indeed hit the Dayton area later that night, The Weather Channel cited Simpson's rant as "possibly saving lives".[57][58][59]

On July 9, 2019, the station rebranded its news operation as Dayton 24/7 Now, sharing that brand with WRGT-TV. It introduced streaming apps and a social media presence with the same name and redirected its former website, www.abc22now.com. In addition, it tweaked its graphics to a different variation used by Sinclair stations.[60][61] 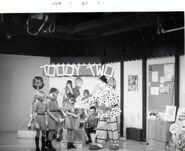 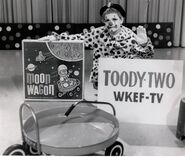 Retrieved from "https://annex.fandom.com/wiki/WKEF?oldid=447599"
Community content is available under CC-BY-SA unless otherwise noted.