WJLA-TV, channel 7, is the ABC affiliated television station in Washington, D.C.. It is theflagship station of the Allbritton Communications Company, which also operates local cable station TBD TV. The two stations share broadcast facilities in the Rosslyn section of Arlington, Virginia. WJLA-TV shares a tower with WUSA in the Tenleytown section of Washington.

The District of Columbia's third television station began broadcasting on October 3, 1947 as WTVW, owned by the Washington Star along with WMAL radio (630 AM and 107.3 FM, nowWRQX). It was the first Band III VHF station (channels 7-13) in the United States. A few months later, the station renamed itself WMAL-TV after its radio sisters.

WMAL radio had been an affiliate of the NBC Blue Network since 1933, and remained with the network after it was spun off by NBC and evolved into ABC. However, channel 7 started as aCBS station since ABC hadn't gotten into television yet. When ABC launched its television network in 1948, WMAL-TV became ABC's third primary affiliate. It continued to carry some CBS programming until WOIC-TV (later WTOP-TV and now WUSA) signed on in 1949. During the late 1950s, the station was also briefly affiliated with the NTA Film Network.[1]

In 1975 Texas businessman Joseph L. Allbritton, the owner of Washington-based Riggs Bank, purchased the Star along with the WMAL stations. As a condition of the purchase, Allbritton had to break up the newspaper/broadcast combination, which the Federal Communications Commission was seeking to prohibit under its "one-to-a market" rule. WMAL-TV was separated first from its radio sisters when ABC purchased WMAL-AM-FM in March 1977. Upon the radio transfer, channel 7 changed its call letters to the current WJLA-TV, after Allbritton's initials. Allbritton then sold the Star to Time, Inc. in February 1978.

Rumors abounded from the mid-1990s onward that ABC might buy WJLA-TV, thus reuniting it with its former radio sisters. However, ABC sold most of its radio properties, including WMAL and WRQX, to Citadel Broadcasting Corporation in June 2007. Even so, WJLA is still an ABC affiliate to this day under Allbritton because the company has an exclusive affiliation deal with the network. After WJZ-TV in Baltimoreswitched to CBS in 1995, WJLA became ABC's longest-tenured affiliate.

In December 2007, WJLA began simulcasting WTOP-FM on its "Weather Now" digital sub-channel, though dropped this as of late July 2009.

WJLA became the second television station in Washington (behind CBS affiliate WUSA) to broadcast newscasts in high definition, beginning on December 8, 2008. The newscast has new graphics and made minor changes to the news desk for better viewing quality with high definition.

Prior to 2001, WJLA's newscasts had long rated third in the market, behind WUSA and NBC-owned WRC-TV.

The station scored a major coup in 1999, when it hired Maureen Bunyan, former longtime anchorwoman at WUSA. In 2003, Leon Harris, formerly of CNN, joined the station as an anchor. In 2004, WJLA hired Bunyan's former anchor desk partner, Gordon Peterson; they have since been reunited for the 6:00 p.m. news.

These personnel moves, combined with WUSA's recent troubles, have led to a resurgence in the ratings, and it currently leads at 5:00 p.m. It has the largest news team in the Washington area. As the flagship station of the Allbritton chain, WJLA provides national news headlines for other Allbritton-owned stations.

WJLA News 7 6PM Weeknight - Computers: Where Are They Taking Us? - Starting Monday promo for late 1982

WJLA Channel 7 station id from 1984 - Which opens a newscast

WJLA Live With Kelly - All Winter promo for early January 2017 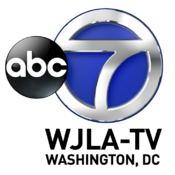 Syndicated programming on WJLA includes Jeopardy! (since 1984), Wheel of Fortune (since 1990), The Oprah Winfrey Show (since 1989), and Live with Regis and Kelly. As one of the largest stations not owned-and-operated by the network, the station generally clears all ABC programming, with only two exceptions. Locally-produced sports and election specials preempt the first hour of primetime on a few days in late summer and early fall, while the poorly-watched Saturday night network lineup is occasionally thrown out during the summer in favor of an old movie. If needed, WJLA reschedules network programming at its earliest convenience, usually during the overnight hours. In most cases, any preempted network programming can be seen on Baltimore's WMAR, which is receivable in Washington and its close suburbs with a rooftop antenna.

In 2009, WJLA-TV returned its digital broadcasts to its analog channel number, 7. While 90 percent of the station's viewers received their signal by cable or satellite, many of the over-the-air viewers had problems after the final transition. Some needed to rescan, and others needed a VHF antenna.[4] Also, at the same time, the "WJLA-TV" callsign was legally transferred from the now-defunct analog channel 7 to the new digital channel 7 with the "WJLA-DT" callsign being retired.

Local Point TV was a local version of current.tv, featuring short five minute video segments created by area residents. Abby Fenton, the station's Director of Community Relations said in an interview with Broadcasting & Cable that "the station likes the Local Point programming and is pondering where else it might fit".[7]

In late October 2008, WJLA began simulcasting on local low-powered station WWTD-LP; the station is expected to continue broadcasting an analog feed of WJLA after the digital transition.

In late July 2009, WJLA dropped its locally produced "WeatherNow" channel for The Local AccuWeather Channel on its DT2 subchannel. It will still carry the "Doug Hill's WeatherNow" name.

On January 23, 2009, WJLA laid off 26 staff members, including several on-air reporters due to financial constraints. The laid off reporters include Andrea McCarren, Sarah C. Lee, Alisa Parenti, Emily Schmidt, Jennefer Donelan, and weekend sports anchor Greg Toland. Most of the dismissals took effect immediately, but some were allowed to serve out their contracts. WJLA also announced a 4.9% salary cut for all remaining staff and a halt to company contributions to 401(k) retirement plans.[8]

Retrieved from "https://annex.fandom.com/wiki/WJLA-TV?oldid=396642"
Community content is available under CC-BY-SA unless otherwise noted.