WIBW-TV is the CBS-affiliated television station for Topeka, Kansas. It broadcasts a digital signal on VHF channel 13 and its digital translator on UHF channel 44. Both operating frequencies are transmitted in Maple Hill. Owned by Gray Television, the station has studios at Southwest Commerce Place next to the I-70/I-470/U.S. 40/U.S. 75/KS 4 interchange.Syndicated programming on WIBW includes: Wheel Of Fortune, Two and a Half Men, Ellen, andLet's Make a Deal.

WIBW-TV, the second television station in Kansas, debuted on November 15, 1953. It was originally owned by the family of the late Senator Arthur Capper along with the Topeka Daily Capital and WIBW-AM 580. The station carried programming from all four networks at the time but was a primary CBS affiliate. Although Topeka was originally part of the Kansas City market, the Cappers persuaded the Federal Communications Commission (FCC) to make Topeka its own market. While the city itself and its close-in suburbs receive the Kansas City stations very well, some parts of Northeastern Kansas get a marginal signal at best.

It was the only commercial station in town for fifteen years. However, area viewers did not have to worry about missing their favorite shows since the Kansas City stations all decently cover Topeka and started appearing on cable in the rest of the market in the 1960s. It lost DuMontwhen that network shut down in 1955, lost NBC when KTSB (now KSNT) signed-on in 1967, and lost ABC when KLDH (now KTKA) signed-on in 1983.

In 1957, Stauffer Publications (owner of Topeka's other newspaper the Topeka State Journal) bought Capper Publications. The two newspapers, which later merged as the Topeka Capital-Journal, and WIBW-AM-FM-TV remained the flagships of Stauffer Publications (later renamedStauffer Communications) until 1995 when the company merged with Morris Communications ofAugusta, Georgia. As a condition of the sale, Morris had to sell Stauffer's television holdings. Most of the former Stauffer television holdings, including WIBW, were sold to Benedek Broadcasting in 1996. In 2002, Benedek merged with this station's current owner, Gray Communications, now Gray Television. The radio stations are still owned by Morris today along with the Capital-Journal.

Beginning on September 18, 2006, its second digital subchannel signed-on with programming from MyNetworkTV (a network launched by Fox parent News Corporation) and a secondary affiliation with Colours TV which was eventually dropped. On February 16, 2009, WIBW moved back to its pre-analog allotment for their digital operations from UHF channel 44 to VHF channel 13. [1][2] But since the transition, some viewers in the urban areas are having difficulty receiving their signal over-the-air on channel 13. The FCC granted WIBW a construction permit for a fill-in digital translator on their pre-transition channel 44. [3] The translator serves the immediate part of the city and the nearby areas west of Topeka from the same transmitter as the main signal.

It is still only commercial station in Topeka on the VHF band (Public Broadcasting Systemaffiliate KTWU is on channel 11). It has dominated the market for as long has records have been kept. Currently, Wheel of Fortune airs on WIBW. Jeopardy!, on the other hand, airs on rival ABC affiliate KTKA. Topeka is one of the very few markets to carry Jeopardy! and Wheel of Fortuneon separate stations. WIBW, along with co-owned Wichita ABC affiliate KAKE-TV and Cox Communications, were one of two partners in "Kansas Now 22", a cable channel that aired throughout Kansas. WIBW and KAKE would originate five minute segments of taped news every fifteen minutes then an additional three minute taped weather segment. The two stations had alternating time slots for both news and weather segments. Live news or weather bulletins from KAKE in Wichita would interrupt normal taped operations on the channel. This service ended on January 2, 2009. The channel was relaunched on January 28 2009 as "Kansas 22" with content originating from New Vision Television stations KSNW and KSNT (both NBC affiliates).

WIBW is one of the few stations west of the Mississippi River whose call sign begins with the letter "W". There are two explanations for this anomaly. One dates to WIBW-AM's roots as a station in Logansport, Indiana. It moved to Topeka in 1927. The move was sponsored by Capper, who added a "W" to the initials of the Indiana station's owner, Indiana Broadcast Works. However, the "W/K" divide for call signs was not always the Mississippi River and Kansas was on the eastern side of the original call divide. Thus it was perfectly acceptable to have a "W" in Kansas. 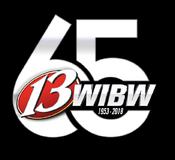 Retrieved from "https://annex.fandom.com/wiki/WIBW-TV?oldid=522733"
Community content is available under CC-BY-SA unless otherwise noted.