WHO-DT is a television station that broadcasts on Channel 13 in Des Moines, Iowa. It's affiliated with the NBC television network and serves most of central Iowa. The station transmits from the WOI Tower in Alleman, Iowa, which is actually owned by WHO-DT's owners.

WHO-DT is repeated on K27CV channel 27 in Ottumwa and was repeated on K66AL channel 66 in Clarinda. The Ottumwa translator is operated by a local non-profit organization, and the Clarinda translator was owned by the City of Clarinda.

WHO-TV signed on the air on April 15, 1954 as the second television station in Des Moines. It was owned by the Palmer family, owners of WHO radio (AM 1040 and FM 100.3, now KDRB). The Palmers had competed with KIOA for the channel 13 license and won it after reaching a settlement.[1] It has always been an NBC affiliate.

The Palmers sold off their broadcast holdings in 1996, with WHO-TV and sister station KFOR-TV in Oklahoma City going to The New York Times Company. Up to that time, channel 13 had been the last locally owned commercial station in Des Moines. WHO-AM, which was eventually acquired by Jacor Communications (which later merged with Clear Channel Communications), continued to occupy the same building until it moved to another building in 2005. While WHO-TV was co-owned with WHO-AM, it used an owl as its mascot, as WHO-AM still does today.[1]

On January 4, 2007, the New York Times Company entered into an agreement to sell its entire television stations group to affiliates of the private equity group Oak Hill Capital Partners. On May 7, 2007, Local TV LLC, a new broadcasting company owned by Oak Hill, officially became the owner of the former New York Times stations.[2]

On December 20, 2007, Local TV and Tribune Company entered into a letter of intent to create a third-party broadcast management company to provide shared services to all of the stations Local TV and Tribune Company own respectively. The company will function as a wholly owned subsidiary of Tribune Company, and will provide back-office services, administration, and a number of other functions to the stations. The most noticeable byproducts of this partnership are the redesigned websites of WHO-TV and Local TV's other stations, which were launched during late January and into February 2009, using the Tribune Interactive platform also used by the websites of Tribune-owned stations.

In 2008, WHO-TV introduced Iowa's Weather Plus, a 24-hour weather channel affiliated with NBC Weather Plus. This station airs on Digital Channel 13.2 and Mediacom Digital channel 246. Although the national feed of NBC's Weather Plus has been discontinued, Channel 13 continues to air its own weather forecasts and radar loops.

On May 19, 2010, WHO-DT began broadcasting complete broadcasts in 1080i high definition. All video, in-studio and field reports, and graphics began origination in high definition and the station began to refer to itself WHO-HD. The noon broadcast was Iowa's first complete high definition broadcast (KWWL in Waterloo had been the first station in Iowa to launch an HD newscast; however, the field video from that station is not in HD).[citation needed]

In 2003, WHO-TV began airing select UPN programs which KPWB had dropped. WHO-TV aired various UPN programs from midnight-1:00 a.m. on Sunday mornings and WWE Friday Night SmackDown (then called WWE Smackdown) on Sunday nights at 11:30 p.m. This lasted until 2006, when UPN amalgamated with The WB Television Network to form The CW and affiliated with then-WB station KPWB (now KCWI).

In 2002, WHO-TV launched digital television programming on channel 19 as WHO-DT. On February 17, 2009 (the original analog television shutdown date[3]), WHO turned off its analog signal in favor of full-time digital broadcasting (joining KDSM-TV as the only 2 Des Moines stations to turn off analog signals on that date). At that time, WHO moved its digital signal from channel 19 back to channel 13 and with it retired the longtime WHO-TV call sign in favor of WHO-DT, a move opposite to what most other TV stations across the country have done (competitor WOI retained its "-DT" suffix as well). As of February 8th, 2011, the WHO-DT signal is multiplexed in the following manner:

WHO's main anchor since 1987, John Bachman was one of three reporters who interviewed Ronald Reagan, announcer for WHO-AM in the 1930s at the end of his presidential term. The other two were Larry King and Barbara Walters.

On September 2, 2008, WHO-TV took over production of the 9 p.m. newscast of Fox affiliate KDSM-TV from Cedar Rapids station KGAN. The newscast is aptly titled "Channel 13 News at Nine on FOX 17." WHO-TV previously produced a short-lived prime-time newscast for PAX TV (now ION Television) affiliate KFPX (channel 39) in 2001, during a time when NBC and Pax had a brief news partnership. It's a one hour newscast on weekdays, thirty minutes on weekends.

For most of its history, channel 13 has been a solid, if distant, runner-up to KCCI. However, it has picked up considerable ground on KCCI in recent years. It's the only station in the market to consistently see increased ratings, while the ratings of it's competitors continue to decline. In the recent February 2010 ratings period, WHO had the highest rated morning newscasts. It also took the lead in all key demographics at 6 p.m.--the first time WHO-TV has won that timeslot in recent memory. While WHO still second in all other timeslots (noon, 5 p.m. and 10 p.m.), KCCI's long dominance ended in those timeslots ended as WHO's ratings surged.[4] 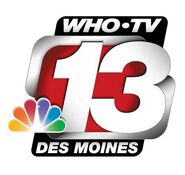 Retrieved from "https://annex.fandom.com/wiki/WHO-DT?oldid=397069"
Community content is available under CC-BY-SA unless otherwise noted.