WHNT-TV is the CBS-affiliated television station for the Tennessee Valley area of North Alabama that is licensed to Huntsville. It broadcasts a high definition digital signal on UHFchannel 19 from a transmitter on Monte Sano. Owned by Local TV, the station has studios on Holmes Avenue Northwest in downtown Huntsville. It also has three bureaus: Decatur, Sand Mountain (Albertville), and Shoals (Florence). Syndicated programming on WHNT includes: Who Wants to Be a Millionaire, Ellen, and The Dr. Oz Show.

The station became a charter affiliate of Tribune Broadcasting's digital multicast channel Antenna TV upon its launch on January 1, 2011, it now is carried on digital subchannel 19.2, replacing RTV programming on that subchannel. The network, whose programming consists of classic sitcoms from the 1950s to the 1990s during the afternoon and evening, and movies during the morning and late night hours, debuted on Local TV, LLC-owned stations in other markets as well as stations owned by Antenna TV's parent company Tribune Company on the same date.

WHNT-TV ended programming on its analog signal, on UHF channel 19, on June 12, 2009, as part of DTV transition in the United States. The station then moved back to channel 19 for its post-transition operations. The station was originally going to move to channel 46 but received late permission from the FCC to move digital broadcasts to channel 19, following the closure and license cancellation earlier in the year ofFlorence station WYLE, which was to have broadcasted on digital channel 20. WHNT is now the only station in the market operating on its original channel.

WHNT began operations on Thanksgiving Day, November 28, 1963 (the first new station to be launched after President John F. Kennedy was assassinated), and has always been an affiliate of CBS. The FCC originally licensed the frequency for WHNT to the city of Fort Payne some forty miles to the southeast. The station was founded by a local businessman, Charles Grisham, now deceased. In 1980, he sold WHNT to The New York Times Company which operated it for over a quarter century. In September 2006, The New York Timesannounced that the company would put its entire broadcast group up for sale with eight other stations affected in addition to WHNT.[2] On May 7, 2007, WHNT became a property of Oak Hill Capital Partnerswhich operates the station as part of Local TV.

WHNT's facilities are in downtown Huntsville where the station moved in 1987 from their original location on Monte Sano Mountain. The move was prompted by a fire that destroyed rival WAFF-TV's studios, then on Governors Drive, five years earlier. For use during an emergency, backup broadcast capabilities for news remains at the Monte Sano site. The transmitter and tower remain on Monte Sano because the mountain provides the highest elevation in the immediate area. WHNT is the only station in Huntsville to operate from a facility actually constructed specifically for broadcasting purposes.WAAY-TV operates from a former gas station, WAFF from a former jewelry store, and WZDX from an office building.

In 2003, WHNT allowed competing stations WAAY and WZDX to use space on its tower after both station's towers used on WAAY's property collapsed, killing three men. This station first used sixteen millimeter film for most of its commercial and news gathering. In 1979, it switched to the 3/4 inch video tape format. WHNT used this system until 1998 when new Panasonic DVC machines and cameras were purchased (DVC is still being used). However in Spring 2006, new cameras were purchased for the station's two bureaus. The cameras are Panasonic P2 cameras which record on 4gig cards. WHNT's archives, the most extensive in Huntsville television, go back to 1973 and include a mix of film and video. The film library had been stored at the University of North Alabama, but has recently been returned to Huntsville. For security reasons, parts of the archives are stored at one of its bureaus. In May 2002, WHNT became the first station in the Huntsville market to broadcast a digital signal and begin broadcasting in high definition on UHF channel 59.

Until November 25, 2008 at 5 p.m., the station offered a 24-hour local weather channel on its second digital subchannel. It then switched to RTV. WHNT is the only station in the Hunstville market area that has never changed its network affiliation. WHNT clears the entire CBS schedule. However, the Saturday edition of The Early Show airs on WHNT-DT2.

WHNT has been noted for live coverage of breaking news such as the shooting death of a Huntsville police officer, the 2006 Huntsville Bus Accident [3], and the solving of a thirty year-old murder case in September 2007. Generally speaking, over the years, WHNT has always been competitive in terms of ratings with rivals WAAY and WAFF. In fact, this station is the only one among the three major network affiliates in Huntsville to have never finished in last place in the Nielsen ratings. Since Fall 2004, WHNT has used the ARMOR Doppler Weather Radar system in weather forecasting along with its own weather radar at its transmitter site.

On August 18, 2008, WHNT became the first television station in Huntsville to begin broadcasting all of its news programs in digital 16:9widescreen. Although not truly high definition when launched, the broadcasts match the ratio of HD television screens. On April 13, 2009 starting with the weeknight 5 o'clock show, the station stopped using the NewsChannel 19 name and became WHNT News 19. Beginning on February 1, 2010, WHNT added a weeknight prime time newscast at 9 on WHNT-DT2 (referenced on-air as WHNT2).[4] It competes with Foxaffiliate WZDX, which also airs a 9 p.m. newscast which is produced by WAAY. WHNT also previously aired an hour-long newscast at 7 a.m. on WHNT2, but discontinued it in September 2010. In November 2010, WHNT added a Sunday evening prime time newscast at 9 p.m. on WHNT2. Following the major tornado outbreak of April 27, 2011, WHNT introduced a 6:30pm newscast.

On August 18, 2010 during the 10pm newscast, WHNT became the first station in Huntsville to begin airing news segments in full high definition. The first segment was a sunset scene in Huntsville's Big Spring Park. [5]

On February 2, 2011, WHNT upgraded its newscast productions to full high-definition. During the two month transition to HD, the station's newcast originated from another part of the building while the studio was completely renovated for the first time since 1987. Unlike WAFF, WHNT's newscasts are in high definition from both the studio and field like many of WHNT's Local TV stablemates. Also, all of the station's file video since October of 2010 is in high definition. [6]

In addition to its main studios, it operates bureaus covering The Shoals and Decatur (Northwestern Alabama), and Sand Mountain(Northeastern Alabama). 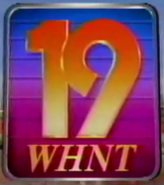