WHAS-TV channel 11 is the ABC affiliated television station in Louisville, Kentucky. Owned by Belo Corporation, the station's transmitter is located in Floyd County, Indiana, near the community of Floyds Knobs. Syndicated programming on WHAS includes: Entertainment Tonight,Oprah, Kim Possible, and Live with Regis and Kelly.

The station began broadcasting on March 27, 1950 on channel 9 as Kentucky's second television station. It moved to its current location of channel 11 on February 7, 1953, after an increase in effective radiated power caused interference with WCPO-TV, Cincinnati.

It was owned by the Bingham family, publishers of the The Courier-Journal newspaper, along with WHAS-AM, Kentucky's first radio station. Family patriarch Barry Bingham, Sr. handed over control to his son, Barry, Jr. in 1971. A 15-year family dispute culminated in a decision to split up the family's media holdings. WHAS-TV was sold to The Providence Journal Company in 1986, while WHAS-AM went to Clear Channel Communications and the Courier-Journal went to Gannett. The Journal Company merged with Belo in 1997.

The station originally was a primary CBS affiliate with a secondary ABC affiliation. When WLKY-TV signed on in 1961, WHAS-TV became a sole CBS affiliate.

In September 1990, WHAS-TV swapped affiliations with WLKY-TV and became an ABC affiliate. At the time of the exchange, ABC was the #1 rated network, with CBS a distant third in the midpoint of the Laurence Tisch era of the network's history. WLKY has since made strong strides in the market as cable penetration allowed WLKY's traditional UHF disadvantage to fade, and other factors allowed the station to strengthen its news operation and compete with WHAS's newscasts evenly. WHAS has seen some struggles over the years within seasons where ABC's schedule is weak, while WLKY's ties to CBS have boosted that station through most of the 2000s. With ABC's current schedule, both stations usually exchange top rankings in the news ratings race.

WHAS-TV shut down analog transmissions on June 12, 2009 [1], and moved its digital broadcasts back to its previous analog channel number, 11. [2]

The station annually broadcasts the WHAS Crusade for Children, a highly successful local telethon benefiting children's charities throughout Kentucky and southern Indiana. It also originated one of the nation's longest-running public service programs, Moral Side of the News, featuring a local interfaith clergy panel discussing the week's events in the light of faith. The panel also administers the annual grants from the Crusade for Children telethon.

WHAS-TV originated the first television broadcast of the Kentucky Derby in 1952. When the Derby moved to ABC in 1975 (local affiliate WLKY), Churchill Downs included a provision in the contract requiring ABC to allow WHAS to continue showing the Derby. The provision became moot when WHAS joined ABC several years later. However, after the Triple Crown races moved to NBC in the 1990s, WHAS-TV lost the rights to WAVE, the local NBC affiliate, though in 2006 regained the rights to the Belmont Stakes which has moved back to ABC. WHAS also simulcast the 2006 Breeders' Cup from Churchill Downs that aired on ESPN.

Currently, WHAS is the flagship station for local broadcasts of Louisville Cardinals basketball. Sponsors include Kroger and Louisville Jewish Hospital.

In October 2009 WHAS launched the Wazoo Sports Network, a regional sports network devoted to high school and minor league athletics and sports from the University of Louisville andUniversity of Kentucky, over its 11.3 digital subchannel, along with Lexington's WLEX. The network had previously been online-only before launching its subchannel service.

Not surprisingly for a station with roots in a newspaper, WHAS-TV has been an innovator in news coverage. It was the first Kentucky station to use newsreel film.

In the late 1970s, WHAS-TV displaced long-dominant WAVE-TV and became the news ratings leader in Louisville. It held the lead through the early 21st century, often by a wide margin. While it still leads WAVE and WLKY in most time slots, its dominance is not nearly as absolute as it once was. In recent years, it has lost the 11 p.m. lead to WLKY. In the May 2006 ratings period, WHAS placed 4th at 11:00 behind Sex and the City re-runs on local Fox affiliate WDRB, but by May 2007 it had regained the runner-up spot behind WLKY. [1]

As a CBS affiliate in the 1970s until 1991, its newscasts were titled "Action 11 News." In 1991, its news branding was changed to "Kentuckiana's News Channel, WHAS-11." Most recently in the late 1990s, the station began using "WHAS 11 News" to brand its news product. Since 1991, WHAS has been using versions of Frank Gari's "Newschannel" music package.

On January 2, 2006, WHAS began producing a 10:00pm newscast on WBKI-TV. On Monday, August 24, 2009, WHAS became the second station (behind WAVE-TV) in Louisville to broadcast its local news in widescreen. Unlike WAVE (and eventually WDRB), the WHAS newscasts are actually aired in 16:9 widescreen standard definition. The WBKI broadcast is presented in standard definition 4:3 due to that station not having an HD master control facility. 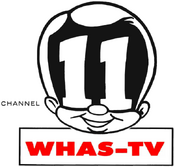