WGRZ is the NBC affiliate television station in Buffalo, New York. Its studio is located at 259 Delaware Avenue in downtown Buffalo. Its transmitter is located at 11530 Warner Hill Road in South Wales, New York. The station is owned by TEGNA.

WGRZ-DT2 was part of NBC Weather Plus until December 2008, when that network shut down, and aired a locally originated "Weather Plus" channel between that time and June 2009. Incidentally, both of WGRZ's current subchannel networks were originally on WKBW-TV.

WGRZ ended analog broadcasts at 1:00 P.M. on June 12, 2009 and began a two week analog night light operation. The station's digital signal remained on channel 33. However, digital television with PSIP capability display WGRZ's virtual channel as 2. WGRZ dropped the -TV suffix, like most Gannett stations just a week after the transition.

The station premiered in 1954 as WGR-TV, owned by the WGR Corporation along with WGR-AM 550. It was an NBC affiliate sharing the Barton Street studios of UHF outletWBUF/Channel 17. In 1955, WBUF, which was silent at the time, was sold to NBC. In January 1956, WGR became an ABC affiliate after NBC moved its programming to WBUF. It was a bad move. All television reception at the time was via set top rabbit ears or roof top aerials. UHF television technology was in its infancy, and most people did not understand how to receive the signals, which are very different and subject to much greater degradations in strength than those of the other local stations, which transmitted on VHF. WGR switched back to NBC in September 1958 after NBC shut down the money-bleeding WBUF, although WGR continued to carry a secondary affiliation with ABC for another two months until WKBW-TV/Channel 7 signed on in November of that year. The abject failure of WBUF-TV in Buffalo actually gave UHF a bad name to the broadcasting industry and the viewing public, but served as a boon to WGR-TV locally. Viewers still wanted more choices, could easily receive the VHF channel 2 signal, and the station now had more syndicated and network program options. The station also carried programming from the now-defunct DuMont Television Network.[1]

During the 1960s, WGR-TV also operated a repeater station on VHF channel 6 in Jamestown, New York; this continued until the channel 2 transmitter was moved from Elmwood Avenue in Buffalo to the South Wales transmitter site, which greatly improved signal coverage into the population center of the mountainous Chautauqua region south of Buffalo.

In 1959, WGR launched an FM radio station, WGR-FM 96.9 (now WGRF). Over the years, WGR Corporation bought several other radio and television stations across the country, including WNEP-TV in Scranton/Wilkes-Barre, WHAM-TV in Rochester (the call letters of which Transcontinent would change to WROC-TV) and WDAF-AM/FM/TV in Kansas City, and eventually became known as Transcontinent Broadcasting. Transcontinent merged with Taft Broadcasting in 1964.

On May 1, 1983, WGR added a Z to its callsign, thus becoming WGRZ. Less than two weeks later Taft Broadcasting and General Cinema Corporation (which operated the Coral Television division) completed the trade deal that was first announced in December 1982 in which Taft gave Channel 2 to General Cinema while in exchange Taft got Miami's WCIX. (Taft held on to WGR-AM/FM until 1987, when it was were sold to Rich Communications. The AM station is now owned by Entercom Communications, while its former FM sister is now owned by Citadel Broadcasting.)

In the years following the 1983 exchange deal, WGRZ changed hands several times. General Cinema exited the broadcasting business by selling Coral Television to WGRZ Acquisition Corp., a partnership between SJL Broadcast Management, TA Associates and Smith Broadcasting, for $56 million in 1986. Native Buffalonian and current Newport Television CEO Sandy DiPasquale also held an ownership stake in WGRZ (through his stake in Smith Broadcasting) at this time. Two years later, Tak Communications purchased WGRZ from the SJL-led group for $100 million in 1988. Less than four years later, Tak filed for Chapter 11 bankruptcy in 1991, and a group of creditors seized the company's assets in 1994. Argyle Television Holdings II, a broadcasting holding company formed by a group of managers who had recently left Argyle I after that company sold all of its stations to New World Communications, purchased the station (and then-sister KITV in Honolulu, Hawaii) from Tak's creditors for $91 million (on WGRZ's end) in 1995. Argyle II closed on WGRZ in April of that year, followed by KITV two months later.

WGRZ nearly lost its NBC affiliation in 1994 when NBC's parent company, General Electric, announced plans to purchase King World Productions, the then-owner of CBS affiliate WIVB-TV. Had it occurred, WIVB would have become an NBC owned-and-operated station. However, the deal fell through, and WIVB was sold to the LIN TV Corporation (who entered into a long-term affiliation renewal with CBS for that station) instead (coincidentally, King World would eventually be acquired by CBS, who merged the company into CBS Television Distributionin 2007).

Gannett acquired WGRZ and WZZM-TV in Grand Rapids, Michigan from Argyle II in a 1996 swap deal (with KOCO-TV in Oklahoma City, Oklahoma and WLWT in Cincinnati, Ohio going from Gannett to Argyle II). The deal closed in January 1997, seven months prior to Argyle II's merger with the broadcasting unit of the Hearst Corporation to form what then became Hearst-Argyle Television (which Hearst now wholly owns under a new name, Hearst Television).

The station used the NewsCenter brand in the 1970s. The current brand, "Channel 2 News," dates to the 1980s and early 1990s. In the early 1990s, WGRZ used the 24 Hour News Source format. In 2000, WGRZ took over the live broadcast rights of the state lottery from its long-time home on WKBW-TV when that station's contract with the lottery ran out.

WGRZ's return to respectability in the ratings began in 2001. In the May ratings "sweeps," the 11pm newscast finished in first place over long time news leaders WKBW-TV and WIVB-TV. It was WGRZ's first ratings win in decades.

WGRZ was the last of the three Buffalo television news outlets to produce a noon newscast, having launched it in February 2008. In June 2009, it dropped its noon newscast in favor of an 11:00 a.m. "midday" news, the first of its kind in the Buffalo market.

WGRZ's newscasts, which have performed a strong second in recent years to rival WIVB, has begun to challenge WIVB's dominance in news ratings, specifically in the 5:00 pm and 5:30 p.m. newscasts according to Nielsen's May 2007 sweeps data. By July 2007, WGRZ's morning show, Daybreak, was soundly beating WIVB's morning show in the ratings. Channel 2's 11 p.m. newscasts have also returned to the #1 position, and have among the highest-rated in the entire United States. However, in the May 2009 sweeps, WGRZ lost significant ground to WIVB and a resurgent WKBW, and fell to a distant second, closer to third-place WKBW than it was to WIVB. And in the November 2009 sweeps, WGRZ was one of many NBC affiliates to fall victim to the so-called "Leno Effect" (referring to NBC's airing of The Jay Leno Show, which leads into the late-night newscasts of NBC affiliates including WGRZ): As in many of the affected markets, WGRZ's 11 pm newscast fell to a distant third, behind both WIVB and WKBW (although WGRZ's weekday morning news show regained the lead over WIVB's morning show, thanks in large part to the return of John Beard to the Buffalo market). With NBC moving Leno back to late-night in February 2010, WGRZ rebounded to a much closer second place behind WIVB in the July 2010 sweeps; however, WGRZ lost ground with Daybreak, once again falling behind WIVB. All three Buffalo stations have been among the highest rated local stations in the country and they are fiercely competitive.

Unlike most television stations, WGRZ takes an openly activist "watchdog journalism" approach to its news coverage, with its commitment to "Holding People In Power Accountable" and being "On Your Side." To do this, WGRZ has the largest staff in the Buffalo market with more general assignment/feature story reporters and sports reporters than either WIVB or WKBW.

As of February 17, 2010, WGRZ became the first Buffalo station to broadcast its newscasts in upconverted widescreen SD.[3] The news video is produced entirely in 4:3 SD (since none of Buffalo's stations have true 16:9 widescreen cameras yet), which is then cropped to a 16:9 aspect ratio and upconverted to 1080i in the control room for broadcast.

On January 7, 2011, WGRZ mentioned that they will be receiving a brand new news set during a short segment. During the 10 day construction period, one of their interview areas was used as a temporary news set.[4]

WGRZ's new set debuted during Daybreak on January 17, 2011. The set which is designed for the transition to High Definition newscasts now features extensive use of steel, glass and wood in combination with HD flat panel displays, blue lighting, and a background of several local landmarks.[5] The landmarks are Buffalo City Hall, Niagara Falls, Erie Community College City Campus, and Old Erie County Hall.[6] The new set complements the HD weather set that debuted in February 2010.

Storm Team 2 is WGRZ's weather team, which currently features a staff of two meteorologists, two weather anchors, and a fill-in meteorologist. WGRZ is the only broadcast station in Western New York to operate an in-house weather radar from its broadcast tower in South Wales, New York. This is branded as "Precision Doppler 2" (formerly known as "Doppler 2000" prior to 2000). Precision Doppler 2 radar has street-level mapping and storm-tracking capabilities.[7]

In February 2010, WGRZ unveiled a new weather set. Changes with the new set include HD flat panel displays, improved lighting, and graphics and technology upgrades which would be phased in throughout Spring 2010. Storm Team 2 Interactive Radar was introduced in February 2010 as an enhancement to the main website.[8]

On May 3, 2010 during daybreak, Precision Doppler 2 was shown in 3D for the first time in showing storms going through the Buffalo area. The Live Lightning indicator was also introduced. WGRZ is the second station in Buffalo to have these capabilities; WIVB was the first in 2007. Also, the new weather crawl system called "Storm Team 2 Alert" debuted. Enhanced features include the ability to display both county maps and doppler radar with any warnings being issued.[12]

In the 1960s, the station used two cartoon elves, named Earis and Iris, as part of its logo. In 1983, to coincide with the new call letters WGRZ, the "futuristic" logo consisted of two lines, making an outline of the number two. In 1988, the station's logo consisted of simply a large number "2" in a common Avant Garde font, with a yellow triangle over blue added in the early 1990s. In the mid-1990s, the logo changed to a blue-on-red box with the bottom reading WGRZ-TV Buffalo. The NBC logo is placed to the left of the numeral "2"; however, "NBC" is not mentioned in the station's on-air brand (which is simply "Channel 2"). 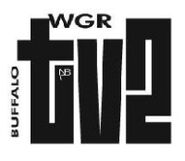 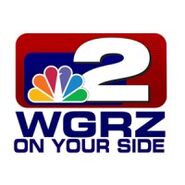 According to the Baseball Hall of Shame book series by Joe and Al Zullo, WGR-TV did not complete the telecast of the game between the Houston Astros and the Los Angeles Dodgerson September 26, 1981. The station went to an Army training film as scheduled at 5 p.m. that afternoon. As a result, local baseball fans missed Astros pitcher Nolan Ryan's record fifth no-hitter.

WGRZ was one of the founding members of the "Love Network" that carried the Jerry Lewis MDA Telethon; WGRZ carries the telethon to this day. WGRZ also carries its own "Kids Escaping Drugs" telethon.

Retrieved from "https://annex.fandom.com/wiki/WGRZ?oldid=590015"
Community content is available under CC-BY-SA unless otherwise noted.