WFTS, virtual channel 28, is the ABC affiliate television station for the Tampa-St. Petersburg, Florida market, owned by The E.W. Scripps Company. It broadcasts its digital signal on UHF channel 29. Its transmitter is located in Riverview, Florida.

WFTS-TV first went on the air on December 14, 1981 as an independent station. Being a flagship of the locally-based Family Group Broadcasting, the station programmed a family-oriented general entertainment format with cartoons, off-network dramas, old movies and religious shows. Its call letters originally stood for Family Television Station. An era of local ownership ended on April 22, 1984, when it was acquired by Capital Cities Communications. It was Capital Cities' first station in Florida, the group's first—and only—independent station, and was also the last station acquired by the group prior to its merger with ABC. The first incarnation of channel 28 was to have been WTSS-TV, an affiliate of the DuMont Television Network in the 1950s.[1] It is very likely that that station never made it to air.

Under Capital Cities, the station added more off-network sitcoms and reduced the number of religious shows and dramas on its schedule. In 1986, Capital Cities stunned the world with its purchase of ABC—the network was ten times bigger than CapCities was at the time. CapCities owned several ABC affiliates, and two CBS affiliates: KFSN-TV (channel 30) inFresno and WTVD (channel 11) in Durham, North Carolina. The company's combined assets exceeded Federal Communications Commission (FCC) ownership limits at the time, so CapCities decided to keep its CBS affiliates and change their affiliations to ABC, along with longtime ABC affiliates WPVI-TV (channel 6) in Philadelphia and KTRK-TV (channel 13) inHouston, and sold WFTS and ABC owned-and operated station in Detroit, WXYZ-TV (channel 7), to the E. W. Scripps Company, while selling several other stations to minority-owned firms. WXYZ would figure in WFTS' history once again less than a decade later.

Scripps continued the format on WFTS, running cartoons, sitcoms, movies, and dramas. A 10 p.m. newscast was planned for the station, but did not come to fruition. WFTS picked up the Fox affiliation in 1988 after WTOG (channel 44) dropped it and the station began to identify on air as "Fox 28", and soon after briefly identified its call letters as standing for Fox Television Station.

On May 22, 1994, New World Communications came to an agreement with Fox, and most of New World's stations, including WTVT (channel 13), Tampa Bay's longtime CBS affiliate, were to affiliate with Fox. Among the stations making the switch were longtime CBS affiliates WJBK (channel 2) in Detroit and WJW (channel 8) in Cleveland. Not wanting to be relegated to the UHF band, CBS heavily wooed Detroit's longtime ABC affiliate, WXYZ, as well as Cleveland's longtime ABC affiliate, WEWS-TV (channel 5); both stations were owned by Scripps. With this as leverage, Scripps told ABC that it would have to affiliate with four other stations owned by Scripps: WFTS, KNXV-TV (channel 15) in Phoenix (which was also due to lose its Fox affiliation to a New World station), WMAR-TV (channel 2) in Baltimore and WCPO-TV (channel 9) in Cincinnati -- the latter had to wait for ABC's affiliation contract with WKRC-TV (channel 12) to expire in June 1996 to switch. Scripps insisted on including WFTS and KNXV in the deal even though neither had a news department.

As a result in December 1994, WFTS assumed the ABC affiliation from longtime affiliate WTSP (channel 10), which took over the CBS affiliation from WTVT. WFTS then sent most of its syndicated programming to WTTA (channel 38), WTOG and/or WTMV (channel 32, now WMOR-TV), which would also air Fox Kids. A decade later, WFTS became one of three Florida television stations, and one of the many Scripps-owned ABC affiliates that preempted Saving Private Ryan. In September 2007, both WFTS and WWSB began to carry Wheel of Fortune and Jeopardy!; previously WTSP (channel 10) had aired the two game shows from 7-8 p.m.

Tampa-St. Petersburg is the fourth largest market with a major network appearing in the UHF channel range (14-51); although most digital television stations broadcast on a UHF frequency, most also identify through the use of a PSIP virtual channel as being on the VHF band, corresponding with the stations' former analog channel numbers. Because WFTS was formerly on UHF analog channel 28, it continues to identify as channel 28 through the use of PSIP. The larger markets with a major network in the UHF channel range are Phoenix (KNXV-TV, virtual channel 15), Atlanta (WGCL-TV, virtual channel 46) and Detroit (WWJ-TV, virtual channel 62). KNXV is an ABC affiliate while WGCL is an CBS affiliate and WWJ is a CBS owned and operated station.

WFTS-TV shut down its analog signal on June 12, 2009 [2], as part of the DTV transition in the United States. The station remained on its pre-transition channel 29 [3] using PSIP to display WFTS-TV's virtual channel as 28.

WFTS began airing full-scale newscasts in 1994, under the 28 Tampa Bay News handle. The newscasts initially originated from Telemation studios in Clearwater, since WFTS's studios on Tampa's east side (at the corner of I-4 and Columbus Drive) didn't have enough room for a full-sized newsroom or set. The station's news operation then moved to its new studios on Himes Avenue across from Raymond James Stadium in 1996. The station gradually added a two-hour morning newscast from 5-7 a.m., a half-hour noon newscast, a 90-mintuute block of news from 5-6:30 p.m., and a nightly 11 p.m. newscast. Given the fact that many former Fox stations had switched to ABC, NBC or CBS at the time, WFTS did not falter with many stations of such that launched newscasts with no success at competing with long-standing (mostly VHF) news stations (some stations cancelled their newscasts as a result), WFTS manages to compete with rival stations in the Tampa market. However, the station is regularly in last place. In the May 2009 sweeps, the station placed last in all time slots except 6-7 am (where it placed third ahead of WTSP) in the key Adults 25-54 demographic [1]. But early in the November 2010 sweeps period, WFTS placed first in several key demographics, especially for its election coverage. This helped boost WFTS' performance in the November 2010 sweeps to a win at noon and a virtual tie for first at 11 p.m. with WTSP. The station also moved into a solid third place (ahead of WTSP) during the evening newscasts.

During its days as an independent station and Fox affiliate, WFTS presented hourly newsbreaks and weatherbreaks, featuring a person reading the day's headlines or the current forecast. During the station's first few months on the air, the newsbreaks were provided by WNSI-AM (1380 kHz., now WWMI) in audio only, over a slide that said News Check. Later on, News Checks began to feature newsreaders on camera at WFTS's studios. By the late 1980s, the newsbreaks became 28 Newsbreak or 28 Weatherbreak. These newsbreaks were discontinued in December 1994 after the station became an ABC affiliate and launched a full-scale news operation.

The newscast title was changed to 28 News briefly in 2002, before being changed again to ABC Action News later that year due to viewer confusion with the "ABC28" branding. The Action News all day branding is also shared with sister station and NBC affiliate KSHB-TV (channel 41) in Kansas City. In fall 2005, the station extended its weekday noon newscast to one hour, following the cancellation of ABC's soap Port Charles. WFTS is one of ten television stations that air consumer reports from John Matarese of ABC affiliate (and sister station) WCPO in Cincinnati.

On July 28, 2007 beginning with the 6 p.m. newscast, WFTS-TV became the first broadcast station in the Tampa Bay market to produce and broadcast its local newscasts in high definition;[4] WFTS surprisingly beat out rivals WTVT (channel 13) and WTSP who were both rumored to be competing to launch the first high definition newscast in Tampa Bay.

Until December 2009, WFTS was one of two stations to have two women regularly anchor an evening newscast. Wendy Ryan and Linda Hurtado anchored the 5 p.m. newscast. Denise White and Kathy Fountain anchored the 5 p.m. newscast on WTVT. Kathy Fountain retired on December 30, 2009, leaving Ryan and Hurtado as the only all-female anchor team in Tampa Bay; this changed again in the summer of 2010 when Jamison Uhler joined WFTS from WCAU-TV in Philadelphia as 5 p.m. and 11 p.m. co-anchor.

The station is not available on Comcast cable in Venice (Southern Sarasota County) due to the presence of WWSB (channel 40), an ABC station formed after WTSP's coverage of the Sarasota area was insufficient when WTSP was an ABC affiliate. This means WFTS is not available to over 91,000 cable subscribers. [2] 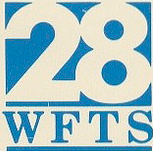 2007–present
Add a photo to this gallery

Retrieved from "https://annex.fandom.com/wiki/WFTS-TV?oldid=434729"
Community content is available under CC-BY-SA unless otherwise noted.