WFLA-TV, virtual channel 8, is the NBC-affiliated television station in Tampa/St. Petersburg, Florida. The station is the flagship station of its owner and operator, Nexstar Media Group. Its transmitter is located in Riverview, Hillsborough County, Florida. WFLA is the only station in the market to be affiliated with the same network (NBC) since signing on. The station shares the "News Center" building in Tampa with co-owned The Tampa Tribune and TBO.com.

WFLA-TV signed on Valentine's Day 1955 with a live broadcast of the Gasparilla Pirate Festival. The station was owned by the Tribune along with WFLA radio (AM 970 and FM 93.3, nowWFLZ). Largely because of its newspaper background, it was the early ratings leader in Tampa until WTVT passed it in 1962.

Arch Deal and Bill Henry were the prominent faces of WFLA's newscasts in the 1960s. Arch Deal's tenure was abruptly cut short in 1975, when he suffered injuries during a parachute accident. Bob Koop served as the evening anchor from 1977–1979. Longtime anchorman Bob Hite came to the anchor desk in 1979.

In 1966, Richmond Newspapers, publishers of the Richmond Times-Dispatch and part-owner of the Tribune, acquired full control of the paper and WFLA-AM-FM-TV. Three years later, Richmond Newspapers renamed itself Media General, and WFLA-TV, the first television station owned and operated by Media General, has been its flagship television station since then. Reporters from the Tribune often appear on WFLA.

The station was renamed WXFL on January 19, 1983 after the WFLA radio stations were sold but regained its original call letters on January 1, 1989. (Both radio stations are currently owned by Clear Channel Communications.) That same year, it surged to first place in the Tampa Bay ratings and has stayed there for most of that time, led by one of the most popular anchor teams in the country. "Eagle 8" made its debut in October 1985.

In the midst of a market shake-up in 1994 which saw many of the Tampa area stations swapping network affiliations, WFLA was one of the few major stations in the market that did not change networks. As a result it became number 1 in the market, a position formerly held by WTVT, which saw its ratings drop after switching from CBS to Fox. However, since NBC's ill-fated experiment with The Jay Leno Show in primetime in late 2009 and early 2010, WTVT regained its number 1 status. In the November 2010 sweeps period, WFLA failed to win a single time slot outright, and even fell to third or fourth place in some time slots.

WFLA-TV shut down its analog signal on June 12, 2009,[1] as part of the DTV transition in the United States. The station remained on its pre-transition channel 7 [2] using PSIP to display the station's virtual channel as 8.

The station is the home of Tampa Bay Buccaneers preseason games. Their current broadcast team for the games is Chris Myers and John Lynch, the former Buccaneer All Pro Safety, with Sports Anchor Dan Lucas on the sidelines. In recent years Myers has also teamed withRon Jaworski, Merrill Hoge, Doug Graber and Charles Davis.

WFLA has been broadcasting its local newscasts in high definition since early 2007. Following Bob Hite's November 2007 retirement after 30 years, Keith Cate assumed anchor duties of the 6 and 11 p.m. newscasts along with veteran anchor Gayle Sierens.

Bill Ratliff, who was brought in to anchor the evening newscasts in 1982 and had been morning and noon anchor since 1985, retired from WFLA on June 25, 2009.[3] Ratliff is now at rival WTSP as a political contributor.

[2] This film, television or video-related list is incomplete; you can help by expanding it with reliably sourced additions.====Voiceover artists====

In 2003, WFLA and its morning show Daytime caused a controversy after The New York Times reported of its "pay for play" practices. The article revealed that businesses were charged several thousand dollars to appear on the show, effectively making their segments "paid segments". Many people saw this as "payola", a practice that is illegal under a Federal Communications Commission (FCC) ruling.[4][5] After much dispute, WFLA agreed to ID each paid segment as such to avoid an intervention from Congress.[6]

The current hosts are Cyndi Edwards and former Extra host Dave Nemeth. It has been added to the Retro Television Network (a.k.a. RTV) schedule and now broadcasts nationally.

For more details on this topic, see Speechless: Silencing the Christians.

On June 27, 2009, WFLA aired a one-hour documentary, Silencing Christians, which dealt with the Christian position of condemninghomosexuality as a sin, and claims of the gay community's drive to make all criticism of homosexuality as hate speech, in the name ofpolitical correctness.[8] The documentary, presented as a paid program from the American Family Association, was televised at 7PM, on the same day St. Petersburg held their pride parade, St. Pete Pride, on the weekend of the 40th anniversary of the Stonewall riots. Prior to the telecast, the station was swamped with numerous phone calls and e-mails against the station showing the program;[9] however, the station decided to present the documentary anyway. After the program ended, the station logged hundreds of phone calls and over 1000 e-mails, all in protest against the show. General Manager Mike Pumo refused to elaborate on the decision, other than the show's content did not "raise the red flag" during pre-screening. Stratton Pollitzer, deputy director of Equality Florida, considered the show as hate speech, saying, "I think this program is a piece of homophobic propaganda and it has no place on a major network like NBC."[10]

On Wednesday, July 15, 2009, 70 to 100 protesters gathered outside of WFLA's studios to protest against the special and the station's attitude towards the community -- the station, however, remained firm on its decision to show the program.[11][12] 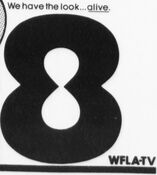 WFLA Newschannel 8 Today 6AM Weekday open from November 9, 2016
Add a photo to this gallery

Retrieved from "https://annex.fandom.com/wiki/WFLA-TV?oldid=612073"
Community content is available under CC-BY-SA unless otherwise noted.