WESH is the NBC affiliate in Orlando, Florida. It is licensed to Daytona Beach, with studio facilities in Winter Park. It transmits its digital signal on VHF channel 11, which redirects to virtual channel 2.1, reflecting its former analog channel assignment, through PSIP. It is currently owned by Hearst Television along with the area's CW affiliate, WKCF. WESH's transmitter is located in Christmas and digital translators in Orange City (at the former analog tower) and Ocala. At the time the tower was built, it was the tallest man-made structure in Florida, at 1,740 feet (530 m). WESH-TV can be seen on Bright House Networks channel 4 and Comcast channel 3.

WESH was the first station in Orlando to carry an on-site radar facility, "SuperDoppler 2", as opposed to relying on National Weather Serviceradars. It is installed on top of the tower located at the Winter Park broadcast studio. Today it also promotes a VIPIR 3D radar system, taking advantage of the fact that the radars at Melbourne, Tampa, Jacksonville and Miami can all reach Orlando, in addition to "SuperDoppler 2."

WESH first went on the air on June 11, 1956. Businessman W. Wright Esch (for whom the station is named) won the license, but sold it to Perry Publications of Palm Beach just before the station went on the air. The original studio was located in Holly Hill, near Daytona Beach.

WESH has always been an NBC affiliate. However, WESH's original tower was only 300 feet (91 m) high, which was tiny even by 1950s standards. This limited its coverage to Volusia County. As such, it shared the NBC affiliation in Central Florida with WDBO-TV (now WKMG-TV). It finally became the sole NBC affiliate for the Central Florida market on November 5, 1957. On that day, the station activated a new 1,000-foot (300 m) tower in Orange City. WESH's analog tower was located farther north than the other major Orlando stations because ofFederal Communications Commission (FCC) rules at the time requiring a station's tower to be within 15 miles (24 km) of its city of license. Also, WESH analog was short-spaced to WTHS-TV (channel 2, now WPBT), the PBS member station in Miami.

Perry sold WESH to Cowles Communications of Des Moines, Iowa in 1965. Cowles later moved its headquarters to Daytona Beach, and built a satellite studio in Winter Park. WESH was the only NBC affiliate under Cowles Communications ownership; during various points in the company's history Cowles also owned at least three CBS-affiliated stations and two ABC affiliates (one of the two ABC affiliates, WHTN-TV (now WOWK-TV) in Huntington, West Virginia, was affiliated with CBS and ABC on separate occasions during Cowles ownership; that station has since switched back to CBS). Cowles exited broadcasting in 1984 and sold two of its stations, WESH and Des Moines' KCCI, to H&C Communications of Houston. Under H&C, WESH closed its original Holly Hill studio in 1989, replacing it with a new studio on Ridgewood Avenue (U.S. 1), near International Speedway Boulevard (US 92) in Daytona Beach. The station's primary operations also moved to a brand new studio in Winter Park in 1991, located on Wymore Road, alongside Interstate 4.

In 1980, while still owned by Cowles, the station built its current tower on the same site as the 1,000-foot (300 m) tower. The new tower allowed for WESH to expand its coverage into areas like Lakeland, Gainesville, and St. Augustine. The channel 2 signal traveled a very long distance under normal conditions. The 1,000-foot (300 m) tower was dismantled in the late 80's.

The Hobby family, owners of H&C, exited broadcasting in 1995, selling off its stations to various owners. WESH and KCCI were sold to Pulitzer. Pulitzer sold its entire broadcasting division, including WESH and KCCI, to Hearst-Argyle in 1998. This gave WESH its third owner in 15 years.

On May 8, 2006, Hearst-Argyle announced its purchase of then-WB (now CW) affiliate WKCF from Emmis Communications. Emmis is also exiting broadcast television so it could concentrate on radio. This acquisition was completed on August 31, 2006; resulting in Orlando's third commercial duopoly operation. Orlando's other two duoplies are Cox-ownedWFTV/WRDQ and Fox-owned WOFL/WRBW. WESH began producing a morning newscast for WKCF in January 2007. WESH also produces a nightly weathercast for its independentsister station serving the Tampa Bay market, WMOR-TV who brands it as Bikini Cast.

WESH called its news department "NewsCenter 2" for most of the 1980s, and it's eleven o'clock newscast was called the NewsCenter 2 Nightcast. The station then switched to "Newschannel 2" in 1992 before adopting the current "WESH 2 News" in 2005. Also in 2005, it began pronouncing the call letters as a word for the first time since the late 1980s-early 1990s (although it should be noted that in the grammatical sense, the station's callsign does not spell an actual word).

WESH began broadcasting newscasts in high definition on November 1, 2007, making WESH the second station in Orlando to broadcast its local newscasts in HD behind WFTV, and the fourth Hearst-Argyle station to broadcast its local newscasts in HD. [1] Their graphics are similar in ways to sister stations WCVB and KMBC. As part of the HD revamp, music from the NBC Collection (which they used for openings, teases and bumpers since 2005) officially replaced the mandated Hearst TV News Music package while the chimes of "Where the News Comes First" were retained during the weekly forecast. However, as of November 2008, the Hearst TV News Music Package (with the de facto "Where the News Comes First" signature) has been fully reinstated.

As of May 2009, WESH is the only station in Central Florida which airs a newscast at 4 p.m. since WKMG cancelled its late afternoon newscasts. On November 30, 2009, WESH debuted new opens, updated graphics and a new station slogan ("Local. Live. Late Breaking.") on their 4 p.m. newscast.

In April 2010, WESH unveiled new technology for its news helicopter "Chopper 2"; it became the first and, until June 2010, only news station in Central Florida to bring high-definition pictures (WFTV upgraded the camera for their news chopper ("Skywitness 9") to HD a few months later). The primary news anchors at WESH are Martha Sugalski and Jim Payne. The position of "Chief Meteorologist" was formerly held by Dave Marsh, who retired on July 31, 2006, after 37 years at WESH. Tony Mainolfi was named the new "Chief Meteorologist" on May 3, 2007.

For over two decades, WESH's newscasts have usually been in second place in the Central Florida television market to WFTV. However, for most of the time since 2004, WESH's newscasts have traded second and third place with WKMG, while its 4 p.m. newscast, which was launched in 2007, has continued to trail The Oprah Winfrey Show on WFTV by a wide margin. This coincided with NBC's recent ratings struggles.

Throughout much of the first half of 2009, WESH's ratings became much more competitive with once-dominant WFTV, especially in the key Adults 25-54 demographic. This was attributed not to an increase in WESH's ratings but to the decrease in the viewership ratings of its major rivals (in other words, WESH remained flat while the others plummeted). That mini-resurgence was short-lived, however, as WFTV regained its dominance as of the November 2009 sweeps period while WESH retreated back to third behind WKMG except on weekday evenings. WESH was one of many NBC affiliates across the country that benefitted from the network coverage of the 2010 Winter Olympics during the February sweeps ratings period: Its late-night newscast beat WFTV's by a small margin. Since then WESH has maintained a solid #2 ranking in most of its newscasts. 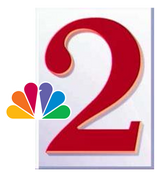 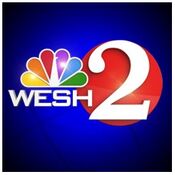 WESH had carried NBC Weather Plus as a digital subchannel 2.2; national WX+ operations have since been terminated by the originating network, effective December 1, 2008.

After the analog television shutdown and digital conversion on June 12, 2009, WESH continued digital broadcasts on its current pre-transition channel number, 11. [2] However, through the use of PSIP, digital television receivers display WESH's virtual channel as 2. WESH is the only VHF station in Orlando after the DTV transition, since WFTV and WKMG-TV opted for the UHF dial instead.

Retrieved from "https://annex.fandom.com/wiki/WESH?oldid=395220"
Community content is available under CC-BY-SA unless otherwise noted.