Western Wisconsin is one of the few markets to receive NBC programming from multiple over-the-air affiliates, as La Crosse is also served by W50DR-D, a repeater of KTTC from Rochester, Minnesota that broadcasts from a transmitter tower in La Crescent, Minnesota, near La Crosse. However, because of its low-power digital repeater status, W50DR only broadcasts to the very immediate area. WEAU is consider the primary NBC affiliate for that area and is the only affiliate available on cable and satellite providers in the La Crosse area.

WEAU-TV signed on the air on December 17, 1953 under the ownership of Central Broadcasting Company, an ownership group led by a predecessor to Morgan Murphy Media and also including the Eau Claire Leader-Telegram, along with WEAU radio (790 AM, now WEAQ at 1150 AM, and 94.1 FM, now WIAL).[2] It has always been a primary NBC affiliate, but initially it also carried programs from CBS, ABC andDuMont. During the late 1950s, the station was also briefly affiliated with the NTA Film Network.[3] One of the first well-known personalities on WEAU was "Sheriff Bob" Dawson, who hosted a kids show during the 1950s and 1960s.

The station initially broadcast from a tower immediately behind the WEAU studios at 1907 South Hastings Way in Eau Claire. A new tower, approximately 1,000 feet (300 m) tall, was built in the same location in 1956 44°39′50″N 90°57′41″W, before an approximately 2,000-foot (610 m) tower was constructed near Fairchild, Wisconsin in 1966. The tower in Eau Claire is now topped by the digital transmitter forWQOW.

Morgan Murphy sold off WEAU radio in 1959;[1] in 1962, it sold WEAU-TV to The Post Corporation of Appleton (Morgan Murphy would later purchase rival WKBT). WEAU's departure from radio proved short-lived: The Post Corporation purchased Chippewa Falls radio station WAXX (1150 AM) in 1963,[4] and two years later established a new WEAU-FM at 100.7 (moving to 104.5 when the Fairchild tower was built[1]), which largely simulcast WAXX's country music format. WEAU-FM's call letters were switched to WAXX-FM in 1977,[5] and in 1978, the country format was moved exclusively to WAXX-FM, with the AM station becoming WAYY (which later moved to 790 AM in a swap with WEAQ). The WEAU-TV news, weather and agriculture departments were used for reports on WAXX-FM and WAYY.

WEAU constructed a weather radar in 1979, the first TV station in the La Crosse/Eau Claire market with its own radar. The radar received graphics upgrades in 1998 and 2006. The station began calling its newscasts NewsCenter 13 around 1979-1980. WEAU premiered its 5 p.m. newscast on September 14, 1981, with Geoff Welch as anchor. The first telecast featured a report from then-WEAU reporter Scott Cohn, later a correspondent for CNBC. A truck to provide live remote broadcasts came into use in 1983.

In 1984, George N. Gillett Jr. purchased the Post Corporation stations, including WEAU-TV. WAXX and WAYY were spun off to Central Communications at the same time, and in 1985, the two stations moved out of the WEAU building to a new facility behind WEAU's back parking lot. Despite being under separate ownership, WEAU continued to provide weather services for WAXX and WAYY, as well as additional stations purchased by Central Communications (which included WEAU's original radio properties, WEAQ and WIAL, as well asWECL and WDRK), until December 31, 2001. WEAU resumed weather services to those same six stations, now under the ownership of Maverick Media, on September 11, 2006.

Gillett began defaulting on some of his purchases in the late 1980s, and in 1990 he sold WEAU to Busse Broadcasting, the owner of KOLN in Lincoln, Nebraska and KGIN in Grand Island, Nebraska (and at one point also owned WWMT in Kalamazoo, Michigan and KOKH-TV in Oklahoma City). WEAU was met with tragedy in September 1991, when primetime news anchor Cindy Schott died unexpectedly. Her death was later the subject of a story on Real Life with Jane Pauley and Dateline NBC. Five years later, in November 1996, long-time morning meteorologist Jim Riggs died of cancer.

WEAU changed its news music in 1992, its logo in the summer of 1994, and its set in March 1997. WEAU had returned to a solo anchor for the 6 p.m. and 10 p.m. news (John Froyd) following the death of Cindy Schott, but returned to a co-anchor format for the 10 p.m. news (Pat Kreitlow and Judy Clark) in August 1998, upon Froyd's retirement. New news music was also debuted at that time.

In 1998, Gray Communications Systems (which was subsequently renamed Gray Television) and Cosmos Broadcasting (the broadcasting division of The Liberty Corporation, which has since been merged into Raycom Media) teamed up to purchase the Busse stations, with WEAU going to Cosmos and KOLN/KGIN going to Gray. Cosmos then traded WEAU back to Gray in exchange for WALB (Gray's original flagship) in Albany, Georgia. Another new logo, along with a slight change to the background of the news set, was unveiled in January 2001.

Technology was the highlight of the following decade, as WEAU-DT (which originally transmitted on channel 39) signed-on April 30, 2002, with the digital transmitter located at the top of the tower in Fairchild. Meanwhile, SkyCam 13, located on a small mast atop WEAU's building, debuted in March 2003. A second SkyCam, located atop the RCU corporate headquarters building in downtown Eau Claire, debuted in May 2007. New music started in the summer of 2002, and in September 2004, the station received a new news set, with background and graphics modification in August 2006. The station ended analog broadcasting at approximately 12:30 p.m. on February 16, 2009. At around 1 p.m., WEAU's digital signal moved from channel 39 to channel 13.

A WEAU-produced 9 p.m. newscast for WLAX/WEUX premiered on August 28, 2006, known as Fox News at 9, and using WEAU personnel for the anchor slots. WEAU launched a local weather channel, "24/7 Weather", on digital subchannel 13.2 on October 2, 2006; it largely carries weather information featuring WEAU meteorologists, but also offers a simulcast of Fox News at 9, as well as Saturday morning E/I programming provided by NASA TV. Wisconsin Journal, a weekend feature show, debuted in October 2006; it was dropped in September 2008 due to declining interest in the program. Longtime news director John Hoffland retired on February 2, 2007, having served in that position for 23 years; he was replaced by Glenn Mabie. Hoffland subsequently returned to his post, replacing Mabie, and then died on July 4, 2009, after serving for 25 years as news director. A Sunday 10:30 p.m. half-hour sports show, SportScene Sunday, premiered on April 1, 2007; it was canceled in July 2008. A weekly Friday morning show based on consumer electronics and digital television, calledTechnology Spot, premiered on September 7, 2007 at 10:00 a.m; it was canceled in 2009. New news music and open graphics debuted in early October 2007.

In August 2008, WEAU became one of the first stations in Wisconsin to produce content in high definition. This is now including an extensive array of shows and station promotions. However, its newscasts remain in pillarboxed 4:3 standard definition for the time being. Also in August 2008, the station switched its branding from NewsCenter 13 to WEAU 13 News and unveiled a new logo incorporating the 2001-era logo with the new branding. The backdrop of the news set was modified by November 2008, to reflect the branding change (the branding at the top of the set was changed by February 2009). A modified version of the WEAU 13 News logo, along with new news graphics, premiered February 1, 2010.

The transmission tower 44°39′49.5″N 90°57′41.3″W for WEAU was the tallest structure in the state of Wisconsin, topping out at 2,000 feet (610 m), or approximately 500 feet (150 m) taller than the Empire State Building. The tower was shared with former sister radio station WAXX. On March 22, 2011, this tower collapsed during an intense winter storm that brought a mixture of snow, ice, sleet, rain, and gusty winds.[6] For the time being, WEAU's programming is seen on WQOW subchannel 18.3 in Eau Claire and WLAX subchannel 25.2 in La Crosse; high-definition programming was available by March 24 on Charter Communications channel 606 and will be available on 18.3 on March 26.[7] For a time beforehand, W50DR-D carried WEAU programming in place of KTTC's schedule for La Crosse viewers.[8] 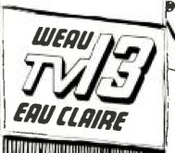 Retrieved from "https://annex.fandom.com/wiki/WEAU-TV?oldid=398062"
Community content is available under CC-BY-SA unless otherwise noted.