WCCB is the Fox affiliate television station in Charlotte, North Carolina. The station's headquarters are located just outside Uptown, off Independence Boulevard across from Bojangles' Coliseum at 35°12′15.7″N 80°47′53.1″W. It is the flagship station of its owner and operator, Bahakel Communications. Its transmitter is located in Newell, an unincorporated area of Mecklenburg County just northeast of the Charlotte city limits. WCCB is carried on cable channel 11 in Charlotte and in most outlying areas. Syndicated programming on the station includes: Ellen, The Big Bang Theory, and TMZ on TV.

WCCB traces its roots to WAYS-TV, which signed on December 31, 1953. It broadcast on channel 36, and was a primary NBC affiliate with a secondary ABC affiliation. It was North Carolina's second UHF station, after WNAO-TV in Raleigh, as well as the second station in Charlotte. It was owned by George Dowdy and his company, Intercity Advertising, along with WAYS radio (610 AM, now WFNZ). Hugh Deadwyler became co-owner of the station in 1954 and its sole owner in 1955. In January 1955, its call letters were changed to WQMC-TV.

Channel 36 had a very weak signal at only 100,000 watts. Its signal was spotty further than 10 miles from the transmitter, making it virtually unviewable even in some parts of Mecklenburg County (home to Charlotte). Even then, like most UHF stations, it was only viewable on most sets with an expensive UHF converter. Television set manufacturers were not required to include UHF tuning capability at the time. As a result, it made almost no headway against CBS affiliateWBTV, which continued to cherry-pick some NBC programming.

The station left the air on March 15, 1955. This was intended to be a temporary hiatus while it underwent technical improvements, including building a more powerful transmitter at a new location. However, not long after that, the FCC granted a construction permit for Charlotte's second VHF station, WSOC-TV (channel 9). This, combined with other delays, forced the station into receivership in 1956. After further delays, Deadwyler sold its construction permit in 1957 to Century Advertising, which planned to re-launch it as ABC affiliate WUTV, with a much more powerful signal than its predecessor. However, these plans were not successful, as even with the stronger signal, WUTV would have still been all but unviewable in most of the market. In addition, most of the market (particularly the western portion) got a fairly decent signal fromWLOS-TV in Asheville, which was included in the Charlotte television listings for many years and even ran ads for its programs in Charlotte newspapers.

In August 1964, Charlotte businessman Cy Bahakel bought the dormant channel 36 license. He returned the station to air on November 1 of that year as WCCB-TV (for Charlotte Cy Bahakel). Logically, it should have returned as a full ABC affiliate. However, WCCB's signal was scarcely stronger than that of its predecessor, at 200,000 watts, essentially limiting its coverage area to Charlotte itself and the inner-ring suburbs. Also, the FCC had only required television sets to have all-channel tuning just a few months before, and most Charlotte homes did not yet have UHF-capable sets. Even though Charlotte was big enough to support three full network affiliates, ABC decided to retain its secondary affiliation agreements with WBTV and WSOC. This forced WCCB to settle for a secondary affiliation with all three networks, airing most of the network programs that WBTV and WSOC turned down. For the next three years, it split both NBC and ABC roughly equally with WSOC; a few ABC shows also continued to air on WBTV, and WCCB in turn aired some CBS programs.

On November 1, 1966, WCCB moved from channel 36 to channel 18, broadcasting from a new tower located on Newell Hickory Grove Road in northeast Charlotte. The new tower was capable of 1.35 million watts of power, giving WCCB a coverage area comparable to those of WBTV and WSOC-TV. The station's former tower was located adjacent to the studio in the parking lot of the old Charlotte Coliseum (later Independence Arena, Cricket Arena and now Bojangles' Coliseum). This facility was originally planned for WUTV in 1957. In 1967, NBC informed WSOC-TV that since there were three stations in the area, it would take its affiliation elsewhere unless it dropped all ABC programming from its schedule. Since ABC was still not on par with NBC at the time, WSOC-TV complied with NBC's demands and became a full-time NBC affiliate. More or less by default, WCCB became a full ABC affiliate. Ironically, the state's biggest market got a full-fledged ABC affiliate after the state's two smallest markets, Greenville/New Bern/Washington and Wilmington, picked up ABC affiliates. However, despite the stronger signal, it remained a distant third in the ratings.

By 1978, ABC had become the nation's most-watched network and wanted a stronger Charlotte outlet than WCCB. ABC took its programming to WSOC. Conventional wisdom suggested WCCB would simply take the NBC affiliation. However, Ted Turner, who owned WRET (channel 36, now WCNC-TV) came in from out of nowhere to take the NBC affiliation, leaving WCCB as an independent. WRET had been on the verge of closing down earlier in the decade. Turner won the affiliation on the basis of a commitment to invest significant resources in upgrading WRET's signal strength and launching a substantially larger local news department than WCCB's. Bahakel always ran his stations on a tight budget, and was unwilling to match Turner's offer.[1]

With WCCB left to fend for itself as an independent station, it bought a large chunk of programming from WRET, including cartoons and older sitcoms. For a time in the late 1970s and early 1980s, after-school cartoons were hosted by the costumed Sonic Man space alien character, played by Larry Sprinkle, who has been a staple in Charlotte radio and television, including a weatherman for WRET/WPCQ/WCNC since the 1980s.

WCCB carried on for almost a decade as a typical UHF general entertainment independent station. In 1986, WCCB became the last top-50 market station to join the newly-launched Fox network as one of its charter affiliates. Since then, WCCB has been one of the strongest Fox stations in the country, particularly since the National Football Conference of the NFL moved its television package from CBS to Fox in 1994. By a lucky coincidence, this made WCCB the unofficial "home" station of the Carolina Panthers upon their debut in 1995. WCCB has carried most Panthers regular season games since then, and has since added preseason games, which had previously been on WBTV. Panthers games are generally the most-watched programs in the market during each week of the football season.

Bahakel was an original partner in the Charlotte Hornets, and WCCB was the flagship station of the Hornets television network for the team's first four seasons.

From 2002 to 2005, WCCB's facility hosted the operations of sister station WOLO-TV, the ABC affiliate in Columbia, South Carolina (100 miles south of Charlotte). During that time, WOLO's newscasts originated at WCCB's studios. This was one of the first instances of "central casting," in which several stations' operations are hosted by one station. In 2005, WOLO moved its operations back to Colombia.

Bahakel owned WCCB until his death on April 20, 2006. His family still runs the station today.

In mid 2007, WCCB moved its Website to the "MyFox" platform, transitioning from foxcharlotte.tv to myfoxcharlotte.com. This design was originally intended for Fox owned and operated stations, but has gained increasing popularity among affiliates as well. But the change only lasted a little over a year; the station changed its mind and de-emphasized the "MyFox" corporate reference with the URL simply known as foxcharlotte.com. The revamped page continued to use the "MyFox" webpage template with no mention of the branding until some time in 2010, when the web site was relaunched through Broadcast Interactive Media. In early 2011, the website began using the foxclt.com url; however, that URL has since become a redirect to foxcharlotte.com.

The station's digital signal is multiplexed. WCCB ended analog operations on June 12, 2009, as part of the DTV transition in the United States. The station continued to broadcast on channel 27. However, digital television receivers display WCCB's virtual channel as 18, its former analog channel. On February 4, 2010, WCCB started transmitting from a translator located near Connelly Springs, NC on channel 20, W20DD-D. The translator was licensed to Marion, NC as W08BJ. It was purchased from WSPA-TV and moved to Smith Mountain.

In North Carolina, WCCB is available on Charter Cable in Montgomery and Wilkes Counties, which are part of the Greensboro/High Point/Winston-Salem DMA.

WCCB is also available on Charter Cable in Mitchell and Yancey Counties, which are part of the Greenville/Spartanburg/Asheville DMA. The Fox affiliate in that DMA, WHNS, is not available.

In Tennessee, WCCB is available on Charter Cable in Johnson County, which is part of the Johnson City/Kingsport/Bristol DMA. The Fox affiliate in that DMA, WEMT, is not available.

WCCB aired newscasts at various times between 1964 until it lost its ABC affiliation in 1978. It reduced its news department to a skeleton staff after going independent and did not carry a regularly scheduled newscast again until 1994, when it began airing a nightly 10 PM broadcast produced by WSOC-TV. In 1999, WCCB announced plans to launch its own news department. That summer, WSOC-TV relocated its primetime newscast to sister station WAXN-TV. WCNC then temporarily took over production of WCCB's newscasts until the launch of WCCB's in-house news department on January 1, 2000. WCCB's return to news was originally branded Fox 18 News at 10. Ironically, WCNC's news on WCCB drew a larger audience at the time than the newscasts which actually aired on WCNC.

In the February 2011 ratings, the station's early-morning newscast, "Fox News Rising," placed fourth behind WSOC, WBTV and WCNC. "Fox News @ 10" regained the lead from the WSOC-produced newscast on WAXN, while the WBTV-produced program on WJZY finished third. The 10 p.m. broadcast also draws a larger audience than any WCNC newscast.[2]

After being known as "TV18" since sign-on, it was rebranded as "Fox 18" in 1988 and as "Fox Charlotte" in 2002. Since WLFL in the Triangle switched to The WB in 1998, WCCB has been the only remaining original Fox affiliate in North Carolina. 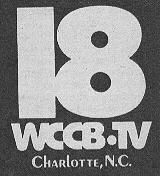