WBNS-TV, channel 10, is a television station in Columbus, Ohio. The station is an affiliate of the CBS Television Network and is owned by the Dispatch Broadcast Group, a subsidiary of the Columbus Dispatch, along with WBNS radio (1460 AM and 97.1 FM). WBNS-TV's studios and offices are located in Columbus.

WBNS-TV currently broadcasts in stereo and uses its SAP channel for a variety of purposes, including simulcasts of its radio sister and simulcasts of NOAA weather radio. Its transmitter and studios are located just west of downtown Columbus. The Dispatch Broadcast Group broadcasting operations also include WTHR, the NBC affiliate in Indianapolis, Indiana.

WBNS-TV began operations on October 5, 1949. The call letters stand for Wolfe's Banks, News and Shoes, identifying to the owning Wolfe family's separate businesses in Columbus. WBNS radio had been a CBS affiliate for almost 30 years, so channel 10 immediately joined CBS television. It is currently the fourth longest-tenured CBS affiliate, behind WUSA in Washington, D.C., WBTV in Charlotte and WFMY-TV in Greensboro, North Carolina. Channel 10 has used the on-air branding of 10TV since 1977. It is also one of only a few stations in the country to have had the same owner, call letters and primary network affiliation throughout its history, as well as the only major station in town still owned by Ohio interests.

WBNS-TV was known to produce such children's programming as Flippo the Clown, Romper Room, Luci's Toyshop and programs hosted by popular Columbus Zoo personality Jack Hanna. The station also featured "Fritz the Nite Owl," who hosted midnight movies during the 1970s and Sunday state government talk called Capital Square in the 1990s. Throughout much of the 1990s and early years of the millennium WBNS-TV was home to the 10TV Kids News Network (KNN); a local show, "Produced by kids, for kids." The half-hour show aired Saturday mornings. Several KNN kids have gone on to pursue careers in television news or public relations in central Ohio.

WBNS-TV was the first television station in the Columbus market to debut a news helicopter, "10TV SkyCam" (now "Chopper 10") in 1979, satellite news truck "10TV Skybeam" in 1986 and launch the Ohio News Network in 1997, which shares studio and office space with WBNS. It has been the TV home of Wheel of Fortune since 1983 and Jeopardy! since 1984.

Appropriately for a station with roots in a newspaper, WBNS-TV has been a consistent ratings leader in programming and news for most of the time since records have been kept. In fact, for many years a popular saying in Columbus was "4 and 6 don't equal 10", referring to WBNS-TV and its rivals, WLWC/WCMH-TV (channel 4) and WTVN-TV/WSYX (channel 6).

The first major challenge to channel 10's dominance occurred in 1985, when WCMH began featuring the popular anchor team (and then-married couple) of Doug Adair and Mona Scott. From then until the to the mid 2000s, WBNS-TV and WCMH bounced back and forth for first place at 11 PM (and were virtually tied for ratings leads). However, since 2002, WBNS-TV has returned to a dominant position due to stronger CBS programming and CBS' reacquisition of Sunday-afternoon NFL telecasts. WBNS-TV usually rotates games among the three teams with followings in the Columbus market--the Cleveland Browns, Pittsburgh Steelers and Cincinnati Bengals (all of whom are part of the CBS package for the American Football Conference).

In 1995, WBNS-TV replaced Cleveland's WJW-TV as the default affiliate in the Mansfield area (part of the Cleveland-Akron DMA) after WJW went to Fox. The new Cleveland CBS affiliate, WOIO, unlike WBNS-TV, did not reach Mansfield with a Grade B signal. WBNS also replaced Toledo CBS affiliate WTOL on cable television in the Lima DMA.

The first live high-definition broadcast on the station's digital signal, WBNS-DT, took place in September 1998 in which the broadcast was a football game between Ohio State and West Virginia, making the station a pioneer in American digital television. The station claims this to have been the first locally produced HD broadcast in the US, however as several other stations throughout the country also lay claim to this distinction, the veracity cannot be verified.

The station has strong ties to the athletic department of Ohio State University. For many years, it has produced the coaches shows for both the football and men's basketball teams, along with a general program about Ohio State athletics in general. Additionally, its radio sister has been the flagship station of Ohio State football and basketball for decades. Formerly the station aired Ohio State games offered by ESPN Plus in both sports, including prime-time pre-emptions of CBS network programming for games. With the launch of the Big Ten Network in September 2007 and that network's exclusivity over live Ohio State sports, this was discontinued beyond selected CBS Big Ten basketball broadcasts on the weekends and latter portions of the conference tourney, although the programming outside of live sports remains produced by WBNS-TV.

During the Super Bowl XLI, channel 10 debuted a large marketing campaign to promote the launch of 10TV News in high definition. The song "Carousels (Dreaming of Tomorrow)" by Columbus rock band Alamoth Lane was used throughout the course of the campaign. Some of the band members were shot playing on the roof of WBNS with the Columbus skyline behind them. The song was also used to promote sister station WTHR's 50th Anniversary in 2007.[2]

The station began making preparations for the transition to HD in late March 2007, and debuted its 5:00 p.m. newscast in high definition on April 2, becoming the first television station in Central Ohio to produce newscasts in HD. The station's newscasts are now known as "10TV News HD", after having been known as "10TV Eyewitness News" for many years.

On November 7, 2008, WBNS-TV's morning-noon anchor Heather Pick died of breast cancer. Heather learned in 2004 that the disease she had beaten once in 1999 had returned. In her last public appearance, Heather hosted the "Spirit Celebration with Heather Pick", raising almost $500,000 for the Columbus Cancer Clinic.[3]

On 12 June 2009, WBNS-TV launched Doppler 10 Now, a weather subchannel based on the Local AccuWeather platform.[1]

WBNS-TV shut down its analog signal, on June 12, 2009 as part of the DTV transition [4]. The station remained on channel 21. [5] As of June 12, 2009, WBNS-TV's digital signal is multiplexed on a full-time basis (it was previously only multiplexed for special events, such as CBS network coverage of the March Madness basketball tournament):

The high-definition feed for WBNS-TV is not available on Dish Network due to a contractual dispute between the two sides. In contrast, WCMH-TV, WSYX, and WTTE have been available in HD on Dish Network since April 1, 2009. 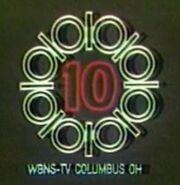 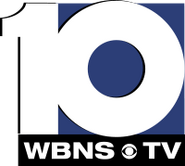 Retrieved from "https://annex.fandom.com/wiki/WBNS-TV?oldid=540302"
Community content is available under CC-BY-SA unless otherwise noted.