WATL, channel 36, is a television station in Atlanta, Georgia, USA affiliated with MyNetworkTV. It is owned by the Gannett Company and is a sister station to WXIA-TV (channel 11), Atlanta's NBC affiliate. WATL's callsign refers to ATLanta, the station's city of license, also known as "the A-T-L" for its airport code. Television studios and offices are shared with WXIA and are located at One Monroe Place on the north end of midtown Atlanta. It shares a broadcast tower with several other local stations near North Druid Hills, just northeast of the city. WATL is one of a handful of stations to have been affiliated with both News Corporation-owned networks, Fox and MyNetworkTV.

Channel 36 began operation on September 13, 1954 as WQXI-TV. The station, owned by UHF pioneer Robert Rounsaville, was one of about 150 UHF stations to give the new high-band spectrum a try. The TV station, which had one camera, shared a house in the northeast Atlanta area of Buckhead with WQXI radio. The radio station constantly promoted its TV sister station in an effort to build an audience. However, UHF converters were rare prior to the All-Channel Receiver Act, and programming (largely old movies, a Saturday-evening barn dance, and shots of the radio DJ spinning records) was nearly unwatchable. The station signed off after less than nine months on the air on March 13, 1955.

Channel 36 would remain dark until the station was relaunched on September 8, 1969 as WATL-TV, under the ownership of U.S. Communications, a broadcaster owned by Daniel H. Overmyer. Overmyer planned on signing-on the station a few years earlier as WBMO-TVas one of the owned and operated stations of the new Overmyer Network, which folded after a month on the air in 1967. This incarnation of WATL lasted only until March 10, 1971 and channel 36 went dark again. For about a week before it signed off, the station ran :30 second announcements with a photograph of its studios on an art card, announcing that it would soon cease operations, ending with the words "Thank You" on screen.

In a newspaper article reporting on the station's demise, it was reported that U..S Communications spent $1 million on programming the first year, including Lost in Space and a block of dinnertime game shows. Ted Turner's WTCG (channel 17, later WTBS and now WPCH-TV) which had been operating a bit longer, "didn't spend a million dollars on anything" and survived. WATL was also the first station in the country to run music videos all weekend, on a show called The Now Explosion. Turner's first move after acquiring WTCG, the UHF station that would serve as the foundation of his media empire, was to take The Now Explosion from WATL.

On July 5, 1976, Don Kennedy of The Popeye Club (a long-running Atlanta kids TV show on WSB-TV) returned channel 36 to the air for good. WATL-TV had a general entertainment format typical of non-network stations, such as public domain movies, financial news, low-budget local shows, syndicated reruns and cartoons, and a blend of CBS, NBC and ABC shows pre-empted from WAGA-TV, WSB-TV and WXIA-TV, respectively. In a common practice among independent stations at the time, the station aired subscription television in the early evening from the late 1970s to about 1981.

ATL Acquisitions Group bought the station in the early 1980s. The subscription TV format moved to new sign-on WVEU (channel 69, nowWUPA) in 1982. At that time, most daytime programming now came from the Financial News Network (now part of CNBC). In 1984, the station was sold again, this time to Outlet Communications. By that time, WATL was a general entertainment independent once again. WATL became one of the charter affiliates of the newly-launched Fox Broadcasting Company in October 1986.

The "musical chairs" of ownership continued in 1989, as Outlet sold WATL (along with WXIN in Indianapolis) to Chase Broadcasting. In 1992, WATL and WXIN were included in Chase's merger with Renaissance Broadcasting. Less than a year later, WATL (along with new sister station KDVR in Denver) was sold to Fox outright and channel 36 became a Fox owned-and-operated station. Fox was in the planning stages for a news operation at the station, and WATL had even gone as far as hiring a news director. However, on May 22, 1994, New World Communications announced an affiliation agreement with Fox, months after the network won the broadcast rights to the National Football Conference of the National Football League. In this deal, most of New World's stations, including WAGA, would switch over to the Fox network. As a result, Fox cancelled the plans for a newscast on WATL and put the station up for sale.

Finding itself about to lose Fox programming, WATL was then approached with an affiliation offer from CBS, which was losing WAGA as an affiliate. However WATL was not interested. At that point, it almost seemed likely that WATL would join the soon-to-launch United Paramount Network in early 1995. Rival station WGNX (channel 46, now WGCL-TV), then owned byTribune Broadcasting was already slated to join the WB Television Network and had also turned CBS down, forcing CBS to make a deal to buy WVEU. Eventually, however, Tribune agreed to let WGNX join CBS, and WVEU became the UPN affiliate.

Fox programming moved from WATL to WAGA on December 10, 1994. Not long after that, Fox subsequently sold the station to Qwest Broadcasting, a company partially owned by musician Quincy Jones and Tribune Broadcasting. (Fox would not be without an owned-and-operated station in Atlanta for long, as they bought out New World in late 1996.) Although it lost the Fox affiliation, WATL kept the Fox Kids programming, because WAGA was not interested in it. The station also affiliated with the WB in January 1995. (Since the sale to Qwest Broadcasting would not be finalized until December 14, 1995, WATL became a WB affiliate owned by Fox, a condition which lasted nearly a year.) WATL continued to air Fox Kids until 1999, when it moved to WHOT (channel 34, now WUVG). That year, Tribune sold WGNX to the Meredith Corporation and purchased WATL outright in February 2000. Because Tribune owned a stake in the WB, WATL could have been considered to be a WB owned-and-operated station.

On January 24, 2006, CBS Corporation (which split from Viacom at the end of 2005) and Warner Bros. Entertainment (the Time Warner division that operates the WB) announced plans to dissolve WB and UPN, combining them to launch The CW Television Network in September 2006. As part of this joint venture, it was announced that CBS-owned WUPA will become the CW's Atlanta affiliate. It would not have been an upset had WATL been chosen instead, however. CW officials were on record as preferring the "strongest" WB and UPN stations, and Atlanta was one of the few markets where the WB and UPN stations were both relatively strong.

WATL was originally slated to revert to independent status, but on May 15, 2006, Tribune announced that WATL would be joining MyNetworkTV, which was formed by Fox Television Stations and its syndication division, 20th Television.

On June 5, 2006, Tribune announced that they would sell WATL to the Gannett Company, the owners of Atlanta's NBC affiliate WXIA-TV, for $180 million. The sale was completed on August 7, 2006, giving Gannett the first television duopoly in Atlanta. ([1]) Like most duopolies consisting of a "Big Four" affiliate and a minor network affiliate, WATL may take up responsibility as an alternate NBC affiliate by airing programs when WXIA cannot such as in a news-related emergency. WATL aired Atlanta Falcons preseason games in August 2008 while its sister station was committed to the 2008 Summer Olympics.

Channel 36 introduced its new on-air branding, MyAtlTV on August 20, 2006, ahead of the September 5 debut of My Network TV (and about a month before the WB's final night on the air). Along with the new network, WATL now airs a WXIA-produced 10 p.m. weeknight HDTV newscast, titled 11Alive News at 10 (formerly My 11Alive News at 10). This half-hour competes with the first half of WAGA TV 5's newscast at that time, while still allowing WXIA to air NBC prime time at that hour.

The station now airs Fox's Saturday morning block, Weekend Marketplace (which WAGA does not air), from 7-9am. Other programs broadcast include popular nationally-syndicated game shows Wheel of Fortune and Jeopardy!, which is rare for a MyNetworkTV affiliate.Because WATL airs these 2 shows, it does not air any sitcom repeats until 10:30 P.M. In,2011 WATL will Return To FOX Network To Become FOX O&Os To Bring Newscast To Become FOX 36 Again.

The WIZ weather radar portion (including overlaid graphics) is exactly the same as that which is being shown at the same moment on the main 11Alive channel, such as during regular or emergency weathercasts. When not being used on the main channel, it shows precipitation and severe weather warnings across the northern half of Georgia and adjacent parts of surrounding states, and occasionally a radar loop of the Southeast. Watches and warnings are still shown by full counties, not just the portions of each which are within the alert box for each storm, the way National Weather Service weather warnings are now issued.

WATL previously aired The Tube on 36.2, but after that network ceased, the digital subchannel was deleted. The WIZ was moved from channel 11.2 on WXIA in early December 2010, possibly in preparation for adding another network to that station. The lower bitrate of the low-motion weather graphics leaves more for mobile datacasting to be done on WATL than adding the new network (possibly Antenna TV, owned by former WATL owner Tribune) to WATL.

At the NAB convention in April 2009, the Open Mobile Video Coalition announced that WATL would be one of the first stations to test-out new ATSC-M/H technology for mobile DTV, expected to be on the air by the end of 2009.[2] It is also carrying the mobile DTV channels for WXIA, as that station is already at its maximum bitrate carrying three channels, and because it is on VHF, while WATL's UHF channel is better suited to mobile communications. 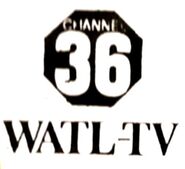 Retrieved from "https://annex.fandom.com/wiki/WATL?oldid=434682"
Community content is available under CC-BY-SA unless otherwise noted.