WABM, channel 68, is the My Network TV affiliate for the Birmingham/Anniston/Tuscaloosa, Alabama television market. WABM is owned bySinclair Broadcasting Group, which also owns the market's CW affiliate, WTTO. WABM broadcast in ATSC digital format on channel 36. Through the use of PSIP technology, the stations virtual channel number displays as "68" on digital televisions and digital converter boxes.

It started in 1986 as WCAJ, a religious station. Some of the shows that initially aired on the station were Catholic shows from the nearbyEternal Word Television Network, as well as programming from the Southern Baptist Convention's ACTS Network. The original studios were located on the campus of Samford University.

The station struggled at first against Fox affiliate WDBB/WNAL and the market's leading independent, WTTO. Due to poor ratings, it began airing home shopping programming and infomercials with religious shows part of the day.

In 1990 the station was sold to Krypton Broadcasting, who changed the call letters to WABM and switched the station to a general entertainment format with old movies, dramas, and westerns. In 1991, WDBB/WNAL ended their own programming schedule, and began simulcasting WTTO. As part of the deal, WDBB/WNAL merged their stronger shows onto WTTO's schedule. This resulted in WTTO owning more shows than it could air, so it sold to WABM some classic sitcoms and cartoons that WTTO would have no room to keep.

Despite a strong format, WABM trailed WTTO in the ratings. WABM had a disadvantage when it came to signal coverage. Due to the acquisition of WDBB/WNAL, WTTO covered Birmingham as well as Gadsden and Tuscaloosa with a city-grade signal. WABM covered only Birmingham with a city-grade signal while Tuscaloosa and Gadsden received a grade B signal. WTTO also had the Fox affiliation.

WABM also suffered because Krypton was going through financial problems. Krypton sold WABM's sister stations in West Palm Beach (WTVX, channel 34) and Jacksonville (WNFT, channel 47, now WTEV-TV), then in 1993 WABM itself was sold to a small ownership group which immediately began a local marketing agreement with WTTO, which was then owned by Abry. Under this local marketing agreement, WTTO and WABM pooled shows, the stations ran separate schedules, and WTTO sold ad time on WABM.

In early 1995, WABM became one of the charter affiliates of the UPN television network. By that time, the Sinclair Broadcast Group had bought out Abry, and continued the LMA. It remained a UPN affiliate even through the Big Switch of 1996 which saw longtime ABC affiliateWBRC switch over to Fox. In March 1998, Sinclair and UPN had a fallout, and as a result, WABM dropped UPN for nearly 6 months, airing syndicated movies instead. By this time, WABM returned to being an independent. Sinclair and UPN would eventually come to an agreement, and WABM once again became a UPN affiliate. Sinclair would buy WABM outright in 2001. Over the years, the station moved away from classic sitcoms, movies, and syndicated cartoons and aired more recent sitcoms as well as talk shows, reality shows, and court shows. It still continued to air cartoons on weekday mornings until the fall of 2003 when UPN ended its cartoon block nationally. On March 1, 2006, Sinclair and Fox announced that WABM would become an affiliate of News Corporation's second U.S. broadcast network, My Network TV, in the fall of 2006, when UPN and the WB merged to form the CW Television Network, which is seen on WTTO. WABM was also considering taking Fox's 4Kids TV Saturday Morning kids block. WTTO had aired Fox Kids after losing the main Fox affiliation from 1996 until 2000, after that, it did not even air on WBRC, a situation that continued as 4Kids TV. This took effect on September 5, 2006.

Effective February 17, 2009 at 11:59 P.M. WABM ceased its analog broadcast on channel 68, and now broadcasts exclusively in digital on channel 36. 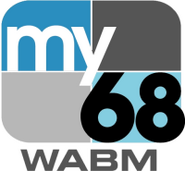 Retrieved from "https://annex.fandom.com/wiki/WABM?oldid=361070"
Community content is available under CC-BY-SA unless otherwise noted.