WAAY-TV is the ABC-affiliated television station for the Tennessee Valley area of North Alabama that is licensed to Huntsville. It broadcasts a high definition digital signal on UHFchannel 32 from a transmitter at its Monte Sano Boulevard Southeast studios on Monte Sano Mountain. Owned by Calkins Media, the station has studios on Monte Sano Boulevard Southeast in Huntsville, and airs its daily 4 p.m. newscast from local lifestyle center Bridge Street Town Centre. Syndicated programming on WAAY includes: Entertainment Tonight, The Doctors, Jeopardy! and Live with Regis and Kelly.

The station's first broadcast was on August 1, 1959 as WAFG-TV. It was Alabama's first primary ABC affiliate. There was only one other station in the area at the time, Decatur's WMSL-TV (now Huntsville's WAFF). This was an unusual arrangement for a two-station market especially one as small as Huntsville was at the time. When the station was sold to Smith Broadcasting (owners of WAAY now WLOR radio) in 1963, the call sign was changed to WAAY-TV. It switched network affiliation to NBC in January 1968 but returned to ABC nearly ten years later in December 1977 citing higher network ratings and the lack of a duplicate ABC affiliate in Florence(where WOWL now WHDF was then an NBC affiliate) as reasons.

Smith Broadcasting sold WAAY-TV to GOCOM Broadcasting (later renamed Piedmont Communications) in 1999. The Smith family, who previously owned broadcasting properties inBirmingham before coming to Huntsville, was the last local owner of a Huntsville television station as rivals WHNT-TV and WAFF had been sold to larger corporations years before. WZDXwhich was the first station in Northern Alabama not affiliated with the traditional networks or the educational television system has always belonged to outside interests. The Smith family also owned radio stations in Fort Walton Beach, Florida and South Pittsburg, Tennessee. At one time, all three of Huntsville's major-network affiliates (WAAY included) had studios located beside its transmitters and towers on Monte Sano.

After a 1982 fire gutted the building of WAFF, that station and later WHNT moved offices and production facilities into the city itself employing microwave relays to send signals to the transmitters. Only WAAY continues to maintain its full operations on Monte Sano Boulevard. WHIQ-TV which is a PBS affiliate serves as a translator relay of Alabama Public Television with programming originating from Birmingham or Montgomery not Huntsville. On September 4, 2003, the 1,000 foot broadcasting tower leased by WAAY collapsed killing three people.

In 2006, Piedmont Broadcasting agreed to sell WAAY to Calkins Media which is a Pennsylvania-based mass media company that owns several small newspapers in Pennsylvania and two other television stations (WWSB in Sarasota, Florida and WTXL in Tallahassee, Florida). The sale to Calkins became official on February 1, 2007. WAAY is Calkins' first broadcasting property outside of Florida. On February 17, 2009, WAAY-TV ended its analog service on UHF channel 31 [1], the station remains to provide digital service on its current pre-transition channel 32. [2]

In the Spring 2007 ratings period, all of the station's newscasts ranked in third place. This is in contrast from the 1970s through the early-1990s, when WAAY was still family-owned. At one point, the station aired weekend morning newscasts but currently does not. On July 16, 2007 at 5, WAAY unveiled a new set and graphics package similar to that of sister stations WWSB and WTXL. Beginning September 13, 2010, its news title became WAAY 31 FirstNews. The station is now using the FirstNews brand and logo in all branding, including commercials for syndicated programming. The station was the first to air a 4:30 a.m. newscast in the market and is the only station in the area airing local news weekday at 11 a.m. and 4 p.m. [3] The channel produced a prime time newscast at 9 for UPN affiliate WHDF during the early-2000s. On September 20, 2010 through a new news share agreement, a second WAAY-produced broadcast at 9 began airing every night on Fox affiliate WZDX. [4] In addition to its main studios, WAAY maintains news bureaus in Decatur (on Lee Street Northeast) andFlorence (on North Pine Street within the University of North Alabama campus), and broadcasts each weekday from Bridge Street Town Centre at 4 p.m. The station operates its own weather radar at the main studios called "Live Storm Force 31 Doppler Max". 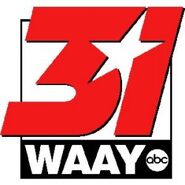