This article is related to the Resident Evil series. S.T.A.R.S. is not related to S.T.A.R. Labs.
For S.T.A.R.S. and S.T.A.R. law-enforcement and emergency teams in real life, see Special Tactics and Rescue. 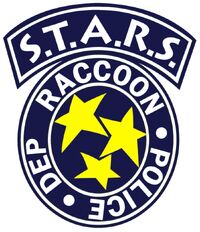 The Special Tactics and Rescue Service (S.T.A.R.S.) (also referred to non-canonically as the "Special Tactics and Rescue Squad") is a fictional law-enforcing task force that appears in Capcom's Resident Evil survival horror franchise. The unit serves as a fictional equivalent to the actual SWAT organization (which also exists in the Resident Evil universe). The main characters in the original Resident Evil (Chris Redfield, Jill Valentine, Barry Burton, Rebecca Chambers, and Albert Wesker) are all members of S.T.A.R.S.

Only eleven of the unit's twelve members appear in the original game. Edward Dewey, Bravo Team's pilot, was only mentioned in the game's instruction manual, but not actually featured in the game—it was assumed that the disembodied hand found by Joseph in the game's introductory cutscene was Edward's, but a few retroactive changes were made in order to include the character for a small role in the prequel Resident Evil Zero (In the Resident Evil remake, the dead pilot is now identified as Kevin Dooley).

According to the instruction manual for the Nintendo GameCube and Nintendo DS versions of the game (as well as the Japanese manual of the original PlayStation game), the Raccoon Police Department's S.T.A.R.S. unit was founded in 1996 in order to combat the increasing rate of city terrorism and other crimes. The team was formed as part of Mayor Michael Warren's "A Bright 21st Century for Raccoon" campaign funded by the Umbrella Corporation. The team consisted of members with law enforcement, military and civilian backgrounds who specialized in various fields. It was comprised mainly of twelve members with two teams: Alpha Team (led by Albert Wesker) and Bravo Team (led by Enrico Marini).

In the events of Resident Evil Zero and the original Resident Evil, S.T.A.R.S. are deployed to investigate a series of brutal cannibalistic homicides which have taken place in the Arklay Mountains on the outskirts of the city; Bravo Team is sent in on July 23, 1998, to investigate these incidents.

However, contact with Bravo Team is lost and on the following day, Alpha Team is dispatched to follow-up on Bravo Team's mission. Their probe of the area leads to an isolated mansion, the Arklay Research Facility, where various mutated creatures (including the mansion's residents) have been transformed into undead creatures as a result of a viral outbreak. Alpha Team also find the remains of most of their Bravo Team compatriots; and discover the others on the brink of death, with the exception of Rebecca Chambers, who manages to escape with the Alpha Team.

It is revealed that the experiments in the mansion were conducted by the international Umbrella Corporation and that the S.T.A.R.S. team's leader, Albert Wesker, is a double agent working for Umbrella, who had orchestrated the deaths of his subordinates in order to collect test battle data for Umbrella's Bio-Organic Weapons (B.O.W.) research.

After they return to civilization, S.T.A.R.S. request a full-scale investigation of Umbrella's activities. However, most, including their fellow R.P.D. officers, find their story unbelievable and the Chief of Police, Brian Irons (who was secretly on Umbrella's payroll) officially disbands the team and replaces the unit with the R.P.D.’s newly-established Select Police Force (S.P.F.) unit to serve as the city's armed response unit. After the establishment of the S.P.F., Redfield heads an investigation on Irons, managing to buy his time by acting insane in front of him. The surviving members of S.T.A.R.S. then band together and participate in anti-Umbrella operations around the globe with the exception of Brad Vickers, who refuses to participate in their investigations[citation needed] and is killed when the outbreak ultimately reaches Raccoon City.

According to the official game guide, S.T.A.R.S. is comprised of two different teams, Alpha and Bravo, for a total of twelve members. Each team is organized based on the tactical squad formation, with five field operatives and a helicopter pilot. The operatives are assigned to one of the following positions: Mission Leader (field commander of the team), Pointman (field scouting and reconnaissance), Backup Man (provides assistance to the Pointman), Omni Man (in charge of vehicle and weapon maintenance), and Rear Security (in charge of establishing contact between the headquarters and the helicopter, as well as treating injured teammates).[1]

Each member of both teams is assigned to one of those positions, with an additional Rear Security operative in both teams in charge of piloting the helicopter.

Armament
The team's standard sidearm is a customised Beretta 92FS called the M92FS S.T.A.R.S. Special or Samurai Edge (first introduced in Resident Evil 3 and later retroactively inserted into later versions of the original Resident Evil and its prequel, Resident Evil Zero). The weapon was designed by Joe Kendo, brother of Kendo Gun Shop owner, Robert Kendo (a friend of Barry Burton). A standard-issue model was distributed among the members of S.T.A.R.S., including further specialized versions for Chris, Jill and Wesker. Barry's model was modified to fire the .40 S&W round with burst fire capability rather than the standard 9 mm Parabellum round.

Uniform
Each member of the unit wears an undershirt with the S.T.A.R.S. emblem over the left sleeve and a Kevlar tactical vest suited for each operative's personal skills and specialty. For example, Chris's vest is equipped with a sheath for his combat knife, while Rebecca's vest prominently displays the Red Cross on the back, the international symbol of a medical assistance officer. Each member is allowed to choose his preferred color for his uniform. An official prototype S.T.A.R.S. uniform was also designed for the team, consisting of olive drab fatigues and a black tactical vest with the S.T.A.R.S. logo emblazoned across the back. However, this uniform was never formally adopted, due to the demise of the S.T.A.R.S. unit. Instead, Chris wore the only known prototype in Resident Evil – Code: Veronica.

Transportation
There are two UH-1-model helicopters assigned to the S.T.A.R.S. unit, with one allocated to each team. Brad Vickers is assigned as Alpha Team's pilot, with Edward Dewey assigned as Bravo Team's pilot. One of the R.P.D.'s pilots, Kevin Dooley, is called in on several occasions to contribute support to both Alpha and Bravo as the situation required. The S.T.A.R.S. photo (with an Aérospatiale/Eurocopter AS350B police helicopter in the background) also suggests that R.P.D. patrol helicopters may be used for S.T.A.R.S. operations when needed.

CCD Camcorder
Kenneth and Joseph each had camcorders mounted on their shoulders to record combat data on 8MM Tapes. Tactically, these devices are used by scouts to record and transmit reconnaissance data and strategic information to the team's command unit, although both of the S.T.A.R.S. field officers were also involved in the situation at the time, and Wesker most certainly would not have wished the information be made known to those outside of his sphere of influence.

The Resident Evil novelizations by S.D. Perry give a slightly different historical background regarding the unit's creation. S.T.A.R.S. is portrayed as a much larger and older organization trained to combat cult-affiliated terrorism (having been founded in 1968 in New York), as opposed to the unit's creation in 1996 by Raccoon City's leading political influence, Mayor Michael Warren, in the canon storyline. The background established for the S.T.A.R.S. as conjectured by S.D. Perry maintains that the Raccoon City branch (in Pennsylvania) is merely one of several S.T.A.R.S. units established within the United States, with another branch established in Exeter, as seen in the original novels, Caliban Cove and Underworld.

The movie Resident Evil: Apocalypse also featured only one canon S.T.A.R.S. member, Jill Valentine, and several other members written specifically for the film, of which most prominent are Jill's friend Peyton Wells and S.T.A.R.S. Captain Ryan Henderson. They did not divide the S.T.A.R.S. Team into Alpha and Bravo Units and The S.T.A.R.S. unit was also much larger in the movie, with at least 30 officers armed with various assault weapons ranging from the typical MP5 submachine gun and the M4 Carbine, to other weapons rarely seen in U.S. law enforcement agencies such as the SIG 550 assault rifle, the Accuracy International Arctic Warfare sniper rifle, and an M60 machine gun. Jill is the only survivors of the S.T.A.R.S. in the film; Peyton becomes a zombie and is killed, Captain Henderson and the rest of the S.T.A.R.S. are killed by Nemesis.

Tokyo Marui, a popular airsoft manufacturer in Japan, created a replica of the S.T.A.R.S. "Samurai Edge" pistol based on its original design model, the Beretta 92FS.