KXTV, channel 10, is an ABC affiliate television station in Sacramento, California. It is owned and operated by the Gannett Company. Its transmitter tower (shared with KOVR) is located in Walnut Grove, California, and studios are located on Broadway, just south of Business Loop 80 at the south edge of downtown Sacramento. Its broadcasting tower is among the tallest man-made structures in the world.[1]

In 1959, the call letters became KXTV (the "X" being the Roman numeral for the VHF channel it broadcasts on, channel 10) when Corinthian Broadcasting bought the station. Corinthian became part of Dun & Bradstreet in 1971. The A.H. Belo Corporation bought all of Dun & Bradstreet's television stations (except for two in Indiana, which went to LIN Broadcasting) in February 1984.

From its founding until 1995, KXTV was an affiliate of CBS. As a CBS affiliate, the station preempted some lower-rated daytime (the 9-10am block in the 1980s and early 1990s) and late night (from the late 1980s until the arrival of The Late Show with David Letterman in 1993) programs. KXTV also preempted Sunday morning cartoons that CBS offered from the 60's until the early 80's. In 1991, KXTV dropped The Price Is Right, due to the abundance of syndicated programming commitments. After several months of complaints, KXTV reinstated The Price Is Right, but to make room for syndicated programming it was committed to carry, dropped Guiding Light due to low ratings in the early 1990s. While most CBS stations aired The Young and The Restless from 11 a.m.-noon, KXTV moved it to the 3 p.m. timeslot in 1994 where the soap did well. As a CBS affiliate, KXTV's station ID included an electronic alarm like version of the infamous CBS "ding".

Then, on March 6, 1995, in an unprecedented move in local television, KXTV swapped affiliations with KOVR, switching networks from CBS to ABC. KXTV is the third station in Sacramento to affiliate with ABC. Low-performing ABC affiliate KCCC Channel 40 (now the home of KTXL) had it first before shutting down and the network moved to KOVR. As an ABC affiliate, the station preempted the half-hour soap airing in the 12:30 timeslot (Loving/The City/Port Charles), at some point running it on overnights; but when the network axed the programming block outright in the early 2000s; KXTV has aired the entire schedule of ABC programming since then. For the first 6 months as an ABC affiliate, KXTV preempted an hour of ABC Saturday morning cartoons, but since the Fall of 1995 has run the entire Saturday morning block. KXTV aired All My Children at 3 p.m. in the early years as an ABC affiliate (probably because it previously aired a soap from CBS in that timeslot and to maintain a similar type of show in that slot), before finally following the niche of airing it at noon alongside majority of the ABC stations—only after the midday newscast moved an hour earlier from noon to 11 a.m.

Four years later, in 1999, Belo traded KXTV to Gannett for that company's KVUE in Austin, Texas. (This actually marked a re-entry into the Sacramento television market for Gannett, who briefly owned KOVR during the late 1950s.) That same year, KXTV began digital broadcasts on a new and separate HDTV channel called 10.1. Then, in 2001, to reflect the station's commitment to its news coverage, KXTV decided to become better known as "News10". In 2006 News 10 started broadcasting a 24 hour weather channel on its second HDTV channel called 10.2.

Until recently, KXTV had first choice on all King World programs offered locally—King World has since become CBS Television Distributionand acquisition policies may have now changed. Nevertheless, KXTV holds the local syndication rights to Jeopardy!, Inside Edition, andWheel of Fortune (all King World-turned-CBS properties). Until 2002, the station also held the local syndication rights to The Oprah Winfrey Show (now another CBS property seen locally on KCRA/KQCA). It is these shows that have made News10 one of the highest-rated local stations in daytime television. Since 2002-2003, KXTV has been the local television home of the Sacramento Kings, the city's National Basketball Association franchise, which coincides with its network's coverage of NBA games. The station picked up the rights to Kings telecasts in the middle of the 2002-03 season due to the contractual dispute between the team and its then-rights holder, ex-UPN stationKMAX. As of 2009, the Sacramento Kings have moved their broadcasts exclusively to Comcast Sportsnet California.

In the late 2000s, KXTV heavily promoted its weather coverage as part of its "Connected to Our Community" marketing campaign. Over-the-air promotions introduced weather presenters and touted weather coverage on the internet (news10.net), on its dedicated digital weather channel (channel 10.2, referred to as "ten-dot-two"), and "on the 10s" (at :10, :20, :30, etc.) on "News 10 Good Morning," its 5 a.m. to 7 a.m. newscast.

Also in the late 2000s, KXTV intensively covered local high school football, especially during Friday news broadcasts. In 2007, for example, the segments were known as "Friday Night Football." The station's helicopter flew from one high school to another to capture aerial shots of the various games. KCRA had its own version called "High School Playbook."

On September 12, 2005, KXTV launched a morning program called Sacramento & Company (shows like this are on a number of Gannett stations) first hosted by Kristin Simones and later by Jodie Moreno, Melissa Crowley and Guy Farris.[citation needed] Sacramento & Co. is a local morning lifestyles and entertainment show that is sponsored by local companies. The show airs weekdays from 9-10 a.m. and is available online.

KXTV ended programming on its analog signal, on VHF channel 10, on June 12, 2009, as part of the DTV transition in the United States. The station then moved back to channel 10 for its post-transition operations. [1]

surrounding residents while creating an icon and gateway for the Broadway Corridor. The top glows with a different color based on the weather conditions or the result of aSacramento Kings or the Sacramento Monarchs win.The News 10 weather tower was debuted on August 24, 2001, the same day the California State Fair opened. It was completed on October 11, 2000, but News10 decided to debut it later because of the rolling blackouts at that time. It was built and designed by Nacht & Lewis Architects based in downtown Sacramento. The television station, an anchor facility and active proponent of improvements to the Broadway Street Corridor, elected not to construct a conventional broadcast tower, examples of which may be seen throughout Sacramento.

On December 16, 2009 at 11 p.m., KXTV began broadcasting its newscasts in high definition, becoming the 3rd Sacramento TV station (behind Hearst's KCRA/KQCA and CBS' KOVR/KMAX), and 9th Gannett-owned station to do so.[3] Only the in-studio portions are in HD; the remote field footage is in upconverted 16:9 widescreen standard definition.

Jeopardy! and Wheel of Fortune have aired on KXTV since the mid-1980s (back when it was CBS). Until 2002, The Oprah Winfrey Show also aired on KXTV, but it has since moved to KCRA.

Prior to adopting the current News10 newscast branding in 1983; KXTV's newscasts had successively identified as Shell News, The Big News, Channel 10 News, Newservice 10 (in the 1970s), and Eyewitness News (early 1980s [2]). For the past two decades (dating back to its time as a CBS affiliate), KXTV has been a distant runner-up to KCRA. In the past two years, KXTV's 11 p.m. newscast has frequently finished in last place in total households among all of the major stations' late-night newscasts (not counting the KCRA-produced 10 p.m. newscast on KQCA).

The Information center located in the News10 newsroom debuted on February 5, 2007 where the News10 Now updates are conducted and online stories are written for the web site. On June 12, 2008 KXTV revealed a new website that lets viewers create a profile and become members of News10.net that allows them to post comments, pictures, write blogs and communicate to News10 people provided by SiteLife.

KXTV Channel 10 - The Spirit Of California ident from 1985

KXTV Channel 10 - The Spirit Of California ident from 1986

KXTV Channel 10 - The Spirit Of California promo from 1986 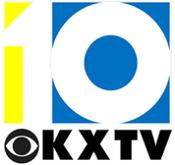 KXTV can be seen on cable in eastern portions of the Bay Area and in all of Butte County as a competitor to KGO and KRCR, respectively.