KWWL is a television station in Waterloo, Iowa. The station operates on VHF channel 7. KWWL is owned by Quincy Newspapers. Its transmitter is located at the AFLAC Towernorth of Rowley, Iowa.

KWWL is an affiliate of NBC. The station is the primary NBC affiliate for the northeastern third of the state of Iowa, including 21 counties and the larger cities of Waterloo, Cedar Rapids, Dubuque and Iowa City. The station's headquarters is in Waterloo, Iowa. KWWL also operates newsrooms and sales offices in Cedar Rapids and Dubuque.

When the Federal Communications Commission opened up bids for channel 7 in Waterloo, it was obvious that the license would either go to Sonderling Broadcasting, owner of KXEL (AM 1540), or R.J. McElroy and his Black Hawk Broadcasting Company, owner of KWWL (AM 1330, now KWLO). After a long legal battle, Black Hawk won the license, and KWWL-TV signed on for the first time on November 29, 1953--a Thanksgiving Day present to eastern Iowa.

In 1980, Black Hawk agreed in principle to merge with Forward Communications. However, the FCC told Black Hawk and Forward that it would have to sell either KWWL-AM-FM or channel 7. The KWWL stations had been grandfathered under a 1970s FCC rule banning common ownership of radio and television stations. When Forward decided to keep the radio stations, Black Hawk sold channel 7 to Aflac just before the merger closed. In 1997, Aflac sold its entire broadcasting division, including KWWL, to Raycom Media.

In 2006, Raycom sold KWWL and a handful of other stations following its purchase of The Liberty Corporationin late 2005. [1] Quincy Newspapers became owner of KWWL on July 1, 2006. The merger made QNI the owner of four of the NBC affiliates serving Iowa, along with flagship station WGEM-TV in Quincy, Illinois; KTIVin Sioux City and KTTC in Rochester, Minnesota.

On April 11, 2010, KWWL became the first station in eastern Iowa and the first QNI station to broadcast its newscasts in HD.[3] At this time, its updated its logo, removing the large blue circle that surrounded the 7. In addition to its primary digital channel, KWWL operated KWWL StormTrack7 on their second digital subchannel. After NBC bought The Weather Channel, NBC Weather Plus network feeds ended in December 2008; the station now carries This TV Network on the subchannel. KWWL also transmitted "The Tube" digital music video channel until The Tube ceased operations on October 1, 2007. It now carries classic programming from Retro Television Network on DT3.[2] On April 27, 2011, the station replaced RTV programming in favor of This TV's sister network, MeTV.

Syndicated programs aired by KWWL include Dr. Phil, Wheel of Fortune, Jeopardy!, The Doctors, and Who Wants to be a Millionaire. 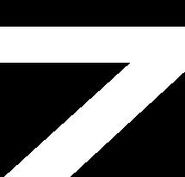 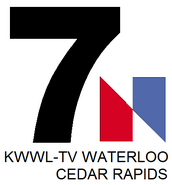 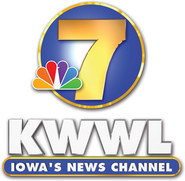 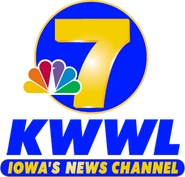 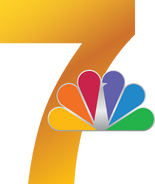 2009-present
Add a photo to this gallery

On February 17, 2009, KWWL returned to channel 7 when the analog to digital conversion completed[5][6] and the "KWWL" callsign was legally transferred from the now-defunct analog channel 7 to the new digital channel 7, with the "KWWL-DT" callsign being permanently discontinued. However, the PSIP identifier still identifies KWWL's main channel on 7.1 as "KWWL-DT."

On November 1, 2010, the FCC granted KWWL a construction permit for a 300-watt digital fill-in translator on channel 7 (the same frequency as their main channel).[7] The translator will serve the immediate part and areas northwest of Dubuque.

Retrieved from "https://annex.fandom.com/wiki/KWWL_(TV)?oldid=514766"
Community content is available under CC-BY-SA unless otherwise noted.