KSTU-TV, channel 13, is the Fox-affiliated television station serving the Salt Lake City designated market area. The station is owned by Local TV LLC, the media arm of private equity firm Oak Hill Capital Partners, and its transmitter located on Farnsworth Peak, southwest of Salt Lake City. The station broadcasts its digital signal on UHF channel 28, using its former analog assignment of channel 13 as its virtual digital channel via PSIP, and is rebroadcast statewide through a network of translator stations.

Note: There have been two television stations in Salt Lake City licensed with the KSTU calls: the current Fox affiliate on UHF channel 28 (digital), and an independent station that broadcast on UHF channel 20 from 1978 through 1987. Both are mentioned in this article, as they were the same intellectual unit; however, these were two different licenses.

The original KSTU began operation on October 9, 1978 as the first independent station in Utah, under the ownership of Massachusetts-basedSpringfield Television, who also owned NBC affiliate WWLP in Springfield, Massachusetts and ABC affiliate WKEF in Dayton, Ohio. The station transmitted on UHF channel 20 using a transmitter originally used for WWLP's partial satellite, WRLP-TV in Greenfield, Massachusetts (which closed down shortly before KSTU's sign-on). KSTU's programming at the time was typical for an independent station—cartoons, off-network classic TV sitcoms, old movies, and drama shows.

The Springfield Television group was sold to Adams Communications in 1984. The station became a charter Fox affiliate in 1987.

In 1980, the FCC added a new VHF allocation on channel 13 to the Salt Lake City market. Five groups submitted applications for a permit to build a television station on channel 13 in May 1981. The FCC held evidentiary hearings with the competing applicants in 1984, and in 1985, announced the winning applicant. The second-place applicant, locally-owned Mountain West Television Company, or MWT Company, appealed the FCC decision, but lost the appeal. When that failed, MWT Company proposed a buyout of the other four competing interests, including the winning applicants. The strategy succeeded and was carried out in November 1986. At the same time, MWT Company entered into a limited partnership agreement with Northstar Communications, Inc., which was partly owned by Allstate, and a new company, called MWT, Ltd., was formed. On January 20, 1987, the FCC awarded the original construction permit for a new station on channel 13 to MWT, Ltd., under the calls KTMW. Buying equipment for the new station soon proved difficult.

Meanwhile, Adams Communications was undergoing serious financial difficulties and decided to sell off its stations. There were few takers for channel 20, however. Under the circumstances, it was very receptive to an offer from MWT to buy KSTU's assets for $30 million. Adams was able to make a considerable profit on the deal, while MWT was able to get the equipment it needed at a substantial discount. The two parties reached a sales agreement in July, the sale was approved by the FCC in September, and the transaction was finalized on October 23, 1987.

On November 9, 1987; MWT moved the channel 20 intellectual unit (call letters, staff, programming and Fox affiliation) to channel 13 and returned the original channel 20 license to the FCC. MWT went on the air with the new KSTU on channel 13 under Program Test Authority. It requested a license to cover the CP on November 16, which the FCC granted on March 7, 1988.

The purchase of the UHF station, however, put a financial strain on MWT, namely on the old Mountain West partners. In May 1988, Northstar Communications became sole owners of KSTU. The station was known as "FOX13" by 1989.

Northstar sold KSTU to Fox the next year, making it a Fox-O&O (owned-and-operated) station. Unlike its rival stations, which have changed networks over the years, KSTU is the only VHF commercial station in Salt Lake City to remain affiliated with the same network since that network's inception; only KTVX, originally an NBC affiliate, has affiliated with ABC longer than KSTU has been a Fox affiliate, and, when Fox acquired KTVX's then-parent Chris-Craft, KTVX was eventually sold to Clear Channel.

The station replaced most of the classic sitcoms on its lineup with talk shows in the mid-1990s. It launched a 9pm newscast in 1992, and added a morning newscast (Good Day Utah) a few years later, replacing morning cartoons. The station added more reality shows and court shows in 2002, once Fox dropped the weekday children's block nationally, then launched a midday newscast in 2005. A year later, KSTU redesigned its website using the Fox Television Stations Group's MyFox platform, which included the station's new logo, in a style in line with the other Fox O&O stations. However, the Times New Roman "13" from the previous logo remained as part of the new logo (unlike WHBQ, which switched to a 13 similar to WTVT).

KSTU was one of two network-owned stations in the Salt Lake City DMA from 1995 until 2007, when CBS sold control of KUTV to Four Points Media Group, a subsidiary of private-equity group Cerberus Capital Management. Fox entered into an agreement to sell KSTU and seven other Fox O&O stations[2] to Oak Hill Capital Partners' Local TV LLC, which currently owns nine stations formerly of The New York Times Company. The sale was closed on July 14, 2008. In 2019 KSTU was sold to E.W. Scripps on September 19. 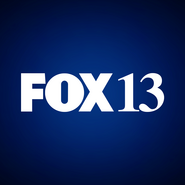 Add a photo to this gallery

The station will became a charter affiliate of Tribune Broadcasting's new digital multicast channel Antenna TV upon its launch on January 1, 2011, carried on digital subchannel 13.2.[3]The network, whose programming consists of classic sitcoms from the 1950s to the 1990s during the afternoon and evening, and movies during the morning and late night hours, debuted on Local TV, LLC-owned stations in other markets as well as stations owned by Antenna TV's parent company Tribune Company on the same date.

On June 12, 2009, KSTU shut off its analog transmitter and began to transmit exclusively digitally, and continued to broadcast on its pre-transition digital channel 28; using PSIP to list KSTU's virtual channel as 13.[4]

KSTU broadcasts a total of 36 hours of local news a week (seven hours on weekdays, and 2½ hours each on Saturdays and Sundays); however as is standard with Fox stations that carry early evening weekend newscasts, KSTU's Saturday and Sunday 5PM newscasts are subject to preemption due to sports coverage.

KSTU extends its coverage throughout the entire state of Utah, plus parts of Arizona, Idaho, Nevada and Wyoming, using a network of more than 75 community-owned translator television stations listed below.

Retrieved from "https://annex.fandom.com/wiki/KSTU?oldid=398918"
Community content is available under CC-BY-SA unless otherwise noted.