KPRC-TV is the NBC affiliated television station with studios in the Greater Sharpstown area in Houston, Texas,[1][2] owned and operated by Graham Media Group, a subsidiary of the Graham Holdings.

The station operates on digital channel 35, but its PSIP virtual channel is 2. Prior to the digital transition, KPRC was the only Houston station on the VHF dial that did not air on a cable channel matching the over-the-air analog channel, due to interference from the low-band VHF terrestrial signal. It was placed on Comcast cable 12 instead.[2] Non Comcast systems on the outer edges of the Houston media market had placed KPRC on cable channel 2.

KPRC-TV has been an NBC affiliate from the very first day since NBC Radio had good relations with its radio counterpart. Due to the Federal Communications Commission (FCC) VHF freeze, KPRC, the only Houston television station for four more years, carried secondary affiliations withCBS, ABC and DuMont[3] until KGUL-TV (now KHOU-TV) and KXYZ (now KTRK-TV) signed on and respectively took over CBS and ABC full time. The DuMont network went defunct in 1956, though it had carriage on UHF station KNUZ-TV (now KIAH's frequency) for a while. Because of its affiliation with NBC, KPRC was the first station in Houston to broadcast the first color program in Houston and was subsequently the first to broadcast in full color.The station first broadcast on January 1, 1949, as KLEE-TV, and was owned by hotelier W. Albert Lee. It was the first television station in Houston and the 12th in the United States. Lee never did reasonably well with his station, and on June 1, 1950, KLEE-TV was purchased by the Hobby family, owners of the Houston Post, who had signed on KPRC radio in 1925 as Houston's first radio station. The television station's call letters were changed to match its radio cousin on July 3, 1950.

From 1969 until 1998, KPRC produced the longest-running syndicated television program in Texas, The Eyes of Texas, which focused on lifestyle segments relating to Texas culture and life, which continues to air on KUHT. KPRC was also one of the first stations to air telethons, raising $28,000 for the American Cancer Society in 1950. It has carried the Jerry Lewis MDA Telethon, sponsored by the Muscular Dystrophy Association, every Labor Day since 1970.

In March 1972, KPRC-TV moved into its state-of-the-art studios on the Southwest Freeway in Houston's Sharpstown neighborhood, where it remains to this day. The three studios located within the building are suspended from the ground to reduce vibration.

In 1983, the Houston Post was sold to MediaNews Group, while the Hobby's broadcast holdings were reorganized as H&C Communications, making KPRC the flagship television station of H&C. After 40 years of ownership by the Hobby family, KPRC was sold to the Washington Post in April 1994. The Houston Post was bought by Hearst and absorbed into its Houston Chronicle, with the last edition printed in April 1995. Since 2004, KPRC has been branded "Local 2. In January 2015, KPRC dropped the "Local" and began calling themselves "Channel 2."

KPRC-TV ended programming on its analog signal, on VHF channel 2, on June 12, 2009, as part of the DTV transition in the United States,[4] and remained on its current pre-transition channel number, 35 [5] PSIP is used to display KPRC-TV's virtual channel as 2. Analog 2 was broadcasting instructions on how to obtain and set up a converter box until July 12, 2009. KPRC began construction of its DTV transmission facilities in 1997.[citation needed]

On June 12, 2009, the digital signal from KPRC Channel 35 was so strong that viewers in the Alexandria, Louisiana area woke up to find Channel 2.1 in place of KALB-TV Channel 5.1 on digital converter boxes as both channels broadcast on digital channel 35. This was likely due to an atmospheric effect known as tropospheric ducting.

Late Night with Conan O'Brien did not air in Houston from 1994 to 1996. Those were Conan O'Brien's first years as the host. During that time, he generally received unfavorable reviews. KPRC instead opted to air reruns of The Jenny Jones Show in this time slot. However, Late Nightdid return to KPRC in 1996 but on a delayed basis. In later years, it was delayed to air various programs such as Ricki Lake's talk show at 11:35 p.m., followed by Access Hollywood, a repeat of the 10:00 news, and Jenny Jones, which delayed Late Night to 2:40 a.m. This was a fact not lost on O'Brien, who visited various parts of Houston including the main bus terminal to watch an episode of his own show with Houstonians in a classic and hilarious skit. The station's mail servers were hit with several hundred and possibly more emails in response. KPRC moved the show to 12:35 a.m. later in 1998, and finally to his network slot in 2005, where he remained until his departure to host theTonight Show. Conan's replacement, Jimmy Fallon, currently airs in his network appointed 11:35 p.m.(CST) slot. However, the station still delays Last Call with Carson Daly until 2:05, showing infomercials at 12:35 a.m. in the show's network timeslot. KPRC is also among a handful of NBC affiliates that does not air Poker After Dark. Likewise it did not carry the short primetime run of the poker series Face the Acein August 2009 (along with WDIV and Milwaukee's WTMJ-TV), pre-empting both episodes with St. Jude Children's Research Hospitalprogramming.

One of the most notorious pre-emptions occurred on July 7, 2001 when KPRC did not air NBC Sports' live coverage of the NASCAR Nextel (then Winston) Cup Series Pepsi 400 from Daytona International Speedway. KPRC, and then general manager, Steve Wasserman (now atWPTV in West Palm Beach, Florida) had a contract to air the Miss Texas Scholarship Pageant live. However the agreement with the Miss Texas organization was made before NASCAR and NBC came to their agreement to carry races in 1999, and despite the wide breadth of time to reschedule, Miss Texas refused to renegotiate or renege on the agreement and allow KPRC to carry the pageant at a new time or on tape delay to accommodate one of NASCAR's tentpole events. This race was especially notable as the winner was Dale Earnhardt, Jr., whose father died at the same track in the final lap of the 2001 Daytona 500 only months before. Angry fans flooded KPRC's email system with a reported 4,000 e-mails. Wasserman also received several complaints in person at KPRC's studios. The race was aired on tape-delay later that night on independent station KNWS-TV, (with permission from NBC) following its scheduled live airing of a Houston Astros game.

According to a user of the Daly Planet blog, the first 30 minutes of the 2007 NFL Kickoff game between the New Orleans Saints and theIndianapolis Colts was shown with default audio in Spanish rather than English.Scroll down to the "comments" section of the page KPRC inadvertenly aired the secondary audio program provided by Telemundo (also owned by NBC's parent company, NBC Universal).

End of Dr. Phil in Houston

On September 14, 2009 KPRC-TV removed Dr. Phil from its schedule, due to management concerns over the show's declining ratings and an overdependence on tabloid content such as true crime stories which had little to do with Houston or the program's gimmick shows for sweepsmonths, and had veered away from the original focus of the series on solving common psychological problems.[6] Dr. Phil was replaced byThe Dr. Oz Show in the 3pm time slot. The station continues to hold the rights to the series until September 2011 and has not subleased the program to another station, leaving the program airing without a critical top 10 market.

From 1985 to 1992, the station used the newscast title "Channel Two News", and broadcast round-the-clock updates throughout the day, including during NBC primetime programming. For several years during the early 1990s, the updates were also aired during the overnight hours with producers and other newsroom personnel anchoring. With anchors such as Ron Stone, Bill Balleza, Jan Carson, Linda Lorelle, Dan O'Rourke, Bob Nicholas, weatherman Doug Johnson and sports anchors Ron Franklin and Craig Roberts, the station's newscasts, while usually in second place, often competed for and even placed first at times. In 1994, when Post-Newsweek Stations bought KPRC, the newscasts were rechristened "News 2 Houston". Three years later, KPRC culminated in the construction of a new set using the newsroom as a backdrop that was similar to the set atWSVN in Miami. This set was referred to as the "News Center" and was used on-air until 2006, though the physical newsroom still exists in the same area. After this point, KPRC won more awards and competed with KHOU and KTRK, even occasionally beating KTRK in the ratings at 10 p.m.In its early years under the direction news director Ray Miller the station was usually first in the ratings. In 1972, KPRC acquired two key KHOU personalities, anchorman Ron Stone and sportscaster Ron Franklin, for its evening newscasts.

From there, the station saw its ratings slip dramatically. Its newscasts prior to the Post-Newsweek buyout were more traditional in comparison. The station's 5 p.m. newscast at one time even reported finishing in fifth place, behind rival news stations KHOU and KTRK-TV, syndicated reruns of The Simpsons on KRIV, and a Spanish-language newscast on KXLN. The station also saw ratings decline in the mornings and also at 4 p.m. and 10 p.m.

KPRC was also hit with a boycott by black civil rights activist Quanell X and others after the demotion of two African-American anchors. During the controversy, KPRC hired longtime KHOU anchor Jerome Gray, who is African-American, and moved former anchor Khambrel Marshall to Executive Producer. In May 2008, KPRC announced Marshall would move back on air as Weekend Meteorologist.

Overall, as of early 2008, KPRC was third in the ratings behind KHOU and KTRK. KPRC's morning and late-night newscasts made the most gains in 2007, competing for second place. KPRC however consistently ranks number one in ratings among young men ages 25–35 in Houston, which is KPRC newscast's target audience.

The competitiveness is also magnified by Nielsen Media's Local People Meters (LPMs), which were introduced to the Houston market in the Summer 2007 to measure ratings. LPMs replace the old diary method of measuring ratings. Since LPMs went live in October 2007, the ratings picture has changed in Houston.[6] KPRC has seen gains in the morning and at night, while the competition has dropped.

On July 19, 2008 during its 6 p.m. newscast, KPRC debuted its newscast in High Definition.

On August 24, 2009 KPRC-TV expanded their morning newscast to begin at 4:30 a.m. The 4:30 a.m. show is anchored by Owen Conflenti with meteorologist Anthony Yanez.

In 2010, the station changed its slogan from "Right Here, Right Now" to "News at the Speed of Life". 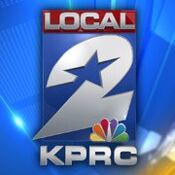 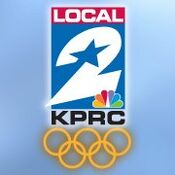 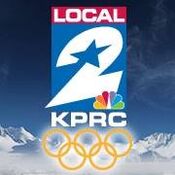 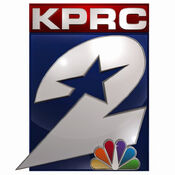 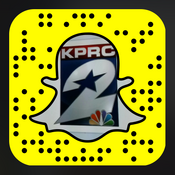 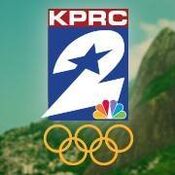 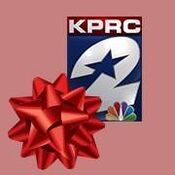