clearinKNSD is the NBC television station based in San Diego, California. It is owned by a joint venture of NBCUniversal (76 percent) and LIN TV (24 percent). However, because NBC Universal has majority control, KNSD is run as an NBC owned and operated station (O&O). The master control center and local commercial insertion for KNSD is at the NBC West Coast headquarters in Burbank, California.

The station is carried on channel 7 on all San Diego-area cable systems; its former branding,NBC 7/39, reflected both this and its over-the-air analog channel (and digital virtual channel) number (39) (the station now brands as NBC San Diego). On both San Diego area cable systems, KNSD's high definition signal can be seen on Cox Communications and Time Warner Cable on channel 707, and in neighboring Tijuana on Cablemas channel 42. The station is also available on its customary channel 39 position (in both standard definition and in high definition) on both of DirecTV's and Dish Network's local channels packages. A 24-hour local weather channel, NBC Plus is seen on KNSD's digital sub-channel 39.2.

The station went on the air on November 16, 1965 as KAAR, San Diego's first UHF independent station. The station at the time was based in the building once occupied by the National Pen Company, located in Kearny Mesa, a neighborhood ten miles northeast of downtown San Diego. However, in 1966, a fire gutted the KAAR building, and the station was off the air for more than a year while the building was being rebuilt. Channel 39 was sold to Bass Broadcasting, a Texas-based broadcaster, and returned to the air in 1968 as KCST. The new call letters stood for California San Diego Television.

For a three to four year period in the late 1960s to the early 1970s, Bass tried to take the ABC network affiliation from XETV-TV (channel 6), a station licensed across the Mexican border in Tijuana but based in San Diego. XETV had been San Diego's ABC affiliate since 1956, but Bass claimed that it wasn't appropriate for an American television network to affiliate with a Mexican television station when there was a viable American station available.

In 1972, the Federal Communications Commission (FCC) revoked XETV's permission to carry ABC. KCST, as the only other commercial station in town other than the CBS and NBC stations, took over the ABC affiliation on July 1, 1973. and XETV became an independent station until it became a charter Fox affiliate in 1987 and more recently, a CW affiliate in 2008. Storer Broadcasting, owner of major network stations in the East and Midwest, bought KCST on September 30, 1974. Shortly afterwards, Storer added the -TV suffix to KCST's call sign.

As an NBC station

In 1977, in the wake of its newfound success as America's number one television network, ABC switched its San Diego affiliation from KCST to KGTV (channel 10), with KCST taking KGTV's old NBC affiliation. ABC had never been happy with the way its San Diego affiliation had ended up on KCST in the first place, and had sought a way to get back on VHF at the first opportunity. This move did not please Storer, who retaliated by dropping ABC from KCST's then-sister station, WITI-TV in Milwaukee, in favor of CBS, with which Storer had strong relations. Around the same time, KCST adopted the "Channel's Alive" station image package from Peters Productions, rebranding to "39 Alive".

In 1985, the Storer stations were taken over by Kohlberg Kravis Roberts & Co. (KKR). Two years later, KCST and the other Storer stations were sold to Gillett Communications (except for former Storer flagship WTVG in Toledo, Ohio, which had been sold to a separate owner). On September 16, 1988, the station changed its call letters to the current KNSD. It also began calling itself "Channel 7/39" on-air. Gillett restructured into SCI TV in 1991 after Gillett defaulted on some of his bond purchases. After SCI filed for Chapter 11 bankruptcy in 1992, its stations were sold to New World Communications.

KNSD, under the traditional definition, is the only network O&O in San Diego. Current Fox affiliate KSWB-TV (channel 69) was previously an O&O of The WB. KNSD is one of two NBC UHF O&Os, Hartford's WVIT (channel 30) being the other; a third UHF O&O, WNCN (channel 17) out of Raleigh-Durham was sold to Media General as of June 2006. In the past, the station blamed its woes on its UHF status, but as viewers moved to cable (San Diego has one of the highest cable penetration rates in the country) and as many VHF analog stations transition to digital UHF, the problem of its position on the UHF dial has been reduced. [1] KNSD used to own KNSD-LP (channel 62), which was leased to Entravision to expand the coverage area of KBNT-CA.

New World then entered into a deal with News Corporation in which most New World stations (mostly CBS affiliates, with a few ABC and NBC stations mixed in) would convert to the Fox network. However, KNSD stayed with NBC since Fox was already on VHF in San Diego (see XETV). KNSD and WVTM-TV in Birmingham, Alabama were both sold to NBC in May 1996, becoming final that August. That following January, KNSD began calling itself "NBC 7/39". Later, in October 1997, NBC sold a minority stake (24 percent) of KNSD to LIN Television, while in exchange, NBC acquired majority control (76 percent) of KXAS-TV in Dallas-Fort Worth from LIN. The deal closed on March 2, 1998, marking the official launch of the new NBC / LIN joint venture (controlled by NBC) known as Station Venture Operations, LP.

In spring 2001, KNSD moved its studios and offices into a redeveloped high-rise office building in downtown San Diego at the NBC Building, which includes an all glass enclosed street-level news studio resembling that of The Today Show in New York City's Rockefeller Center. On May 18, 2007, LIN TV announced that it was exploring strategic alternatives that could have resulted in the sale of the company, including LIN's share of KNSD.[2]

This station's digital channel is multiplexed:

NBC Plus, formerly NBC Weather Plus, is carried as subchannel 39.2; the national network is defunct as of December 2008; however, a computer-updated loop of satellite/radar images, current weather conditions and temperatures, and daily forecasts for major regions of the country is still being shown. The "L" Bar still updates weather conditions and still gives a five day forecast. KNSD, along with KNBC and KNTV, was expected to launch NBC California Nonstop somewhere between December 2010 and January 2011 on their second digital subchannels, which would replace NBC Plus.[1] It contains live news, public affairs programming, and some lifestyle shows. The channel did not actually launch until May 3, 2011. The channel contains a 7 p.m. newscast that is anchored by Mark Mullen and Catherine Garcia.

After the analog television shutdown and digital conversion on February 17, 2009,[2] KNSD remained on its current pre-transition channel number, 40.[3] However, through the use of PSIP, digital television receivers display KNSD's virtual channel as 39. After KFMB-TV, KGTV andKSWB-TV went digital-only on February 17, KNSD became one of only three full-power English-language stations in the San Diego market (not counting XETV or XHDTV, which are licensed by the Mexican government, but broadcast in the English language) that continued to transmit an analog signal for regular programming; the other two were KUSI-TV and KPBS.

As of August 2010, with the cancellations of both Martha Stewart and Bonnie Hunt, KNSD, along with both KNBC and KNTV, announced the pickup of three more syndicated programming, which includes Access Hollywood Live, The Real Housewives, and The Nate Berkus Show, which debuted on September 13, 2010.[4] In Addition to NBC programming and local newscasts, syndicated programming includes The Ellen DeGeneres Show, Access Hollywood, Wheel of Fortune, and Jeopardy!.

Streetside San Diego (a local lifestyles and infotainment program) and Noticias Mi San Diego (a Spanish-language newscast; it was a holdover from KNSD's operation of KBOP-CA) were local programs previously produced by KNSD; these programs, along with the station's weekend morning newscasts, were canceled on December 5, 2008 as a result of budget cuts at the station.[5]

In 1973 as KCST, the station started a news department, with Harold Greene, later to gain fame in Los Angeles, as news director and lead news anchor.

With the addition of California Nonstop, KNSD currently produces 29½ hours of local news, with 5½ hours on weekdays and one hour on weekends, except for that Sunday's 6pm newscasts is preempted for NBC Sunday Night Football during football season. A two-hour news block is aired live at 5am, followed by the market's only one-hour 4pm newscast, then half-hour blocks at 5 and 6pm, and a 35-minute wrap at 11pm. The 11pm newscast is rebroadcast at 4am before Early Today, which leads to its local morning newscasts. On weekends, unlike most NBC O&O stations, KNSD only has half-hour news blocks at 6 and 11pm.

In December 2010, KNSD underwent major renovations for the first time since moving to the new studios in 2001. The new look debuted on December 13, 2010.[6] The studio itself mainly mirrors that of the Today show,[7] which is the first step in preparation for HD broadcasts.

On January 29, 2011, KNSD became the fifth station in the San Diego market, and the last NBC-owned station to produce its newscast in high-definition, although not all field reports are shot in true HD. The newscast also featured a new graphics package as well as the station's new primary branding, NBC San Diego, dropping any reference to the "NBC 7/39" moniker and at the same time, the "7/39" branding in general after 23 years. A new music package by 360 Music was commissioned at the time of the launch,[8] which features the NBC chimes. This left XETV as the only station in the market that continued to broadcast its news in 4:3 standard definition until April 23rd, 2011 when they finally switched to HD. In addition, MyNetworkTV station WWOR-TV in Secaucus, New Jersey remains the largest television station (by market size) and the only major English-language network O&O with in-house news operations without high-definition or even 16:9widescreen newscasts. (It is noted that CBS-owned WWJ-TV in Detroit also produces its morning news show in pillarboxed 4:3 standard definition; however, it does not have a full-time news department.) 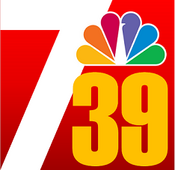