KMOV-TV, virtual channel 4, is the CBS-affiliated television station in St. Louis, Missouri. The station broadcasts its digital signal on UHF channel 24, which remaps to its former analog channel assignment of 4 via PSIP. The station is owned by Sander Media, LLC. with studio and office facilities in St. Louis and transmitter located in Lemay, Missouri.

The station began broadcasting on July 8, 1954 as KWK-TV, owned by the Convey family along with KWK radio (1380 AM, now KSLG). It took the CBS affiliation from WTVI (channel 54, now KTVI on channel 2). Until 1955, it also aired whatever ABC programs that WTVI turned down.

However, CBS wanted its own television station in St. Louis to run alongside its powerhouse radio station, KMOX (1120 AM). It originally won a construction permit for channel 11—the last remaining commercial VHF license in St. Louis—in 1955. However, CBS decided two years later instead to buy KWK-TV, and transferred the channel 11 license to St. Louis hotelier Harold Koplar for no financial consideration. Almost immediately, the deal was held up after the St. Louis Amusement Company, one of the applicants for channel 11, protested to the United States Court of Appeals in January 1958.[1] The appeal was dropped in November 1958.[2] CBS officially took control of channel 4 later that month, and changed its calls to KMOX-TV after its radio sister. The following April, channel 11 signed on as independent station (and now CW affiliate) KPLR-TV.

By 1986 CBS was experiencing rough financial straits, an after-effect of successfully fending off a hostile takeover attempt by Ted Turner the previous year. CBS spent the latter portion of 1985 repurchasing a large portion of its stock to help block the Turner takeover. Once Turner sold his stock, CBS was saddled with significant debt and needed to raise cash. Not long after Laurence Tisch became the company's chairman CBS made the decision to sell KMOX-TV, at the time its smallest owned-and-operated television station. On May 16, 1986, former CBS subsidiary and future parent company Viacom purchased the station and renamed it KMOV.

As part of a sale of Viacom's non-UPN affiliated stations (brought about after they purchased Paramount Pictures in 1994), Belo acquired KMOV in a three-way deal also involving two television stations in the Seattle-Tacoma market. As part of the transaction, Belo sold KIRO-TV to Cox Enterprises, who subsequently sold its existing Seattle-Tacoma station, KSTW, to Viacom. The deal was consummated on June 1, 1997.

As a CBS-owned station, channel 4 cleared the entire network schedule. When Viacom took over in 1986, this changed rather drastically. KMOV began signing off the air at night, thus pre-empting the overnight news program CBS News Nightwatch. A barrage of scattered primetime pre-emptions later followed that was so rampant, the station earned a mention in Ken Auletta's 1991 book, Three Blind Mice. KMOV randomly replaced CBS prime-time shows with programming such as Billy Graham Crusades and National Geographic specials, syndicated movie packages, and occasional sporting events. According to Auletta, KMOV preempted 103 hours of CBS prime-time programming in 1987, accounting for nearly 10 percent of the network prime-time schedule. In the 1990s, the prime-time pre-emptions eased, and currently, the station only occasionally pre-empts a CBS prime-time program. The station also resumed a 24-hour broadcast schedule in the early-1990s.

In February 2002, KMOV and the St. Louis Post-Dispatch launched the weekly news discussion program Extra Edition hosted by weekday morning news anchor Marc Cox. In 2003 KMOV began producing and airing At the Zoo, a program that gives behind-the-scenes look at the St. Louis Zoo, but is on encore editions currently in 2009, was hosted by meteorologist Kent Ehrhardt.

In September 2008, KMOV premiered Great Day St. Louis, a one-hour daytime show, mostly focusing on entertainment and lifestyle topics in the St. Louis area. The show is hosted by Carol Daniel. Stephanie Simmons was the co-host, until Matt Chambers replaced her in March 2009.

On June 13, 2013, the Gannett Company, owner of NBC affiliate KSDK (channel 5), acquired Belo. As the deal would violate FCC regulations that disallow common ownership of two of the four highest-rated stations in a single market (KMOV and KSDK have ranked as the top two stations in the St. Louis market in total-day ratings for several years), Gannett would retain KSDK, while it would spin off KMOV to Sander Media, LLC (owned by former Belo executive Jack Sander). Gannett intended to provide services to the station through a shared services agreement, KMOV's operations were to remain largely separate from KSDK, including separate and competing news and sales departments.[1] However, on December 16, 2013, the United States Department of Justice threatened to block the merger unless Gannett, Belo and Sander completely divested KMOV to a government-approved third-party company that would be barred from entering into any agreements with Gannett. Justice claimed that Gannett and Sander would be so closely aligned that Gannett would have dominated spot advertising in St. Louis.[2] On December 23, 2013, shortly after the Gannett/Belo deal was approved and completed,[3] Meredith Corporation, which owns fellow CBS affiliate KCTV on the other side of Missouri in Kansas City, announced that it would purchase KMOV, along with KTVK]] and KASW in Phoenix for $407.5 million.[4]

KMOV shut down its analog signal for the 2009 DTV transition with digital broadcasts remaining on channel 24.[3] Through the use of PSIP, digital television receivers will continue to display KMOV's virtual channel as 4.1.

Currently, KMOV airs 24.5 hours of local news each week (with five hours on weekdays, and an hour-and-a-half on Saturdays and Sundays).

Many KMOV on-air staff have moved on to jobs in the national spotlight (both Richelle Carey and meteorologist Reynolds Wolf moved to CNN in 2006). While this would initially seem like a positive, the "revolving door" and the unfamiliarity many of the station's personalities have in the market has been one of KMOV's weaknesses. Three of the station's four main anchors (Russell Kinsaul, Vickie Newton, and one anchor opening; Donna Savarese left the station in 2007) have been with the station for fewer than five years, three of the stations four main meteorologists (Matt Chambers, Steve Templeton, and Kristen Cornett) have been with the station fewer than three years. Though this may have initially caused some hiccups for KMOV, the ratings now seem to be increasing. Since the departure of Karen Foss from KSDK in December 2006, Larry Conners assumed the mantle of longest-serving 10 p.m. news anchor in the market.

On January 27, 2008 at 5:30 p.m., KMOV became the second station in St. Louis to broadcast in 1080i High Definition behind KSDK which has been in HD since 2006. With the switch to HD came a new set by FX Group and new graphics which is a red and blue version of the graphics used on sister Belo Stations KING-TV, KREM-TV, KTVB/KTFT, WCNC-TV, KGW-TV, and Northwest Cable News.

In 1976, it was the second station to adopt the "Channel 2 News" theme that eventually became the de facto official theme music for CBS' O&Os. It dropped the tune in 1986 after Viacom took control, but it later used another "Channel 2 News"-derived tune, The CBS Enforcer Music Collection from 2001 to 2008. Ironically, for a time in the late 1980s, it used News Series 2000 - a tune traditionally associated with ABC stations — as its theme song.

KMOX-TV led the ratings in St. Louis for most of the time from the late 1960s to the early 1980s, in common with most of its CBS stablemates. From the early 1980s until recently, KMOX-TV/KMOV has been a solid runner-up to KSDK, though until the mid-1990s it had to fend off a spirited challenge from KTVI. Although KMOV's newscasts won much critical acclaim, they were rarely highly rated. The 10 p.m. newscast regularly won at least a 20% share in viewership, while KSDK averaged about 30% share.

Since 2004, KMOV has seen significant growth in viewership. The station initially beat out KSDK at 10 p.m. in November, 2004. KMOV won at 10 p.m. again in May 2006.[4] In November 2006, KMOV's 10 p.m. newscast not only beat out KSDK's, but also became the most-watched late newscast in the country. Most of the 10 p.m. growth can be attributed to CBS' primetime ratings increases and NBC's large drop in viewership. However, KMOV has also seen growth in all of its other newscasts, at times where the station does not benefit from a strong CBS lead-in.[5] 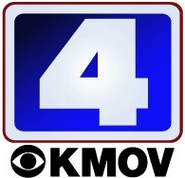 1993-present
Add a photo to this gallery


Cite error: <ref> tags exist, but no <references/> tag was found
Retrieved from "https://annex.fandom.com/wiki/KMOV?oldid=398711"
Community content is available under CC-BY-SA unless otherwise noted.