The station first went on the air on November 1, 1953 as KLZ-TV. It was owned by Harry Huffman and his Aladdin Broadcasting Company along with KLZ radio (560 AM and 106.7 FM, now KBPI). KLZ-TV immediately took CBS from KBTV (channel 9, now KUSA), owing to KLZ-AM's long affiliation with CBS Radio. In 1954, Gaylord sold KLZ-AM-FM-TV to Time-Life. McGraw-Hill bought the station in 1972, changing the calls to the present KMGH-TV.

During the 1950s, the Channel 7 staff included newscaster (later sportscaster and Dialing For Dollars host) Starr Yelland who came from KOA-TV (now KCNC-TV) and Ed Scott as Sheriff Scotty to entertain the kids. [1] In 1956, KLZ-TV presented the first TV remote broadcast from a courtroom after General Manager Hugh Terry won a court battle to allow cameras into the courtroom. In 1957 Panorama, a weekly public affairs series on Channel 7, became the first Denver-produced program to win a prestigious national Peabody Award. It was written and hosted by Gene Amole and directed by Jim Lannon. The television station has since won two more Peabody awards for the investigative reports "Honor and Betrayal: Scandal at the Air Force Academy" (2003 - Hosted by John Ferrugia and produced by Kurt Silver and Jeff Harris, who is now the KMGH-TV News Director) and "Failing the Children: Deadly Mistakes"(2008 - Hosted by John Ferrugia and produced Tom Burke and Arthur Kane). KMGH-TV is the only Denver TV station to win two Alfred I. duPont-Columbia awards - one for the 2003 report, "Honor and Betrayal: Scandal at the Air Force Academy" and again in 2010 for the investigative documentary "33 Minutes to 34 Right," hosted by Tony Kovaleski and produced by Tom Burke and Arthur Kane. The station was the first in Denver to operate a news bureau inWashington, D.C., as well as the first Denver station to receive reports from its own radio and TV correspondents in Europe and Asia. Channel 7 televised the first kidney transplant in the mid-1960s.

Starting in 1968 and running through 1983, the most popular kids show in town was the Noell and Andy Show, 8–8:30 a.m. Monday through Friday. Her coloring contest drew hundreds of entries each week [2].

Channel 7 has always been located in the same block at Speer Boulevard and Lincoln Street, though from 1953 until 1969 the station was housed in a former auto dealership on the east side of the block at E. 6th Avenue and Sherman Street. The station's current eight-sided, five-level building, called "The Communications Center", opened in 1969, state-of-the-art at the time.

KMGH had been one of CBS's stronger affiliates. However, as a result of CBS's partnership (and later merger) with Westinghouse in the mid-1990s, the network had to divest its owned-and-operated station (O&O) in Philadelphia, WCAU-TV (since Westinghouse already owned KYW-TV in that city). In a three-way trade, WCAU was sold to NBC while Denver's longtime NBC affiliate and O&O, KCNC-TV, was sold to a partnership of CBS and Westinghouse.

In 1998, KMGH's current rendition of the Circle 7 debuted, which is a variation of those seen on other ABC stations on Channel 7. The station added the ABC logo to it in the bottom left approximately a year later colored in yellow (like the network's yellow-and-black on-air look of the era, as well as the station's blue-and-yellow). In 2006, KMGH aligned itself with other ABC stations, including KABC-TV in Los Angeles, by using the same news package by Gari Communications, specifically designed for ABC O&Os. KMGH is not, however, owned by ABC. In conjunction with the music switch, on-air graphics were overhauled to include shades of red in addition to KMGH's signature gold and blue combination, and its Circle 7 logo was updated to look like real glass (on the website, it was metallic).

KMGH went HD August 18, 2008 and amended its 2006 graphics. The logo is now a deep blue circle 7 logo.At the same time, McGraw-Hill had recently struck its own affiliation deal with ABC, due in part to having its stations in San Diego and Indianapolis aligned with the network (KERO-TV in Bakersfield, California was also part of the deal between McGraw-Hill and ABC; however, it had to wait for its affiliation contract with CBS to run out in March 1996 before it could finally switch to ABC). In keeping with all of this, on September 10, 1995, ABC moved its programming from KUSA to KMGH. KMGH's outgoing CBS affiliation went to KCNC, with NBC moving from KCNC to KUSA.

KMGH operates the 24/7 Weather Channel on subchannel 7.4 and Comcast Digital Cable, channel 247. The station replays all newscasts of the day (with the 10 p.m. news running until the next morning), with weather updates and real-time weather information on screen. [3] [4]

Currently, KMGH broadcasts a total of 33½ hours of local news each week (with 5½ hours on weekdays, two hours on Saturdays and four hours on Sundays); unlike most ABC affiliates or its competitors, KMGH does not air local news in the weeknight 6 p.m. time slot, as the newscast airing in that slot was canceled after May 26, 2006.

While KLZ-TV always had a strong line-up of local and syndicated programs during the station's early years, it was obviously helped by CBS's long dominance nationally. It led the 10 p.m. news ratings from the early 1960s until 1977 when it was topped by KBTV (now KUSA-TV), which benefited from the rise of ABC's prime-time ratings as well as an improved news product that took advantage of live electronic news gathering (ENG) technology. KMGH-TV actually had ENG capability first, in 1975, with its "Insta Cam", but never promoted it on the air, noted Craig Allen in "News is People" (2001 Blackwell Publishing). "We waited and waited, but they never promoted it," then KBTV promotions director Harvey Mars told Allen. In 1970, Channel 7 had a 40 share, while KOA-TV and KBTV were battling to stay out of last place, each with about a 24 share. By the end of the decade, KBTV had a 54 share at 10 p.m., more than all of the other stations combined.

Channel 7's 10 p.m. news team in the 1960s was headed by news anchor Carl Akers, weatherman Warren Chandler and Starr Yelland with sports. All three did live commercials as part of their program. John Rayburn joined the 10 p.m. news in 1964 but left for KBTV in 1967. In 1966, Akers took a short-lived retirement only to show up a year later at KBTV (channel 9) as anchor and news director. He was replaced at channel 7 by Bob Palmer from KOA-TV. The Palmer, Chandler, Yelland team continued until 1975 when Terry Phillips was added as a news co-anchor. Phillips was replaced by John Lindsey in 1976. In 1982, Palmer returned to KOA-TV.

On July 15, 2002, KMGH-TV became the first major market television station in the world to broadcast fully automated newscasts. A computer system, known as ParkerVision, combines the work of several technical personnel in a program requiring just a single operator. Ten studio cameras, channels of audio, all art graphics and electronic titling along with tape operations are programmed and played back live by one person instead of seven people.[5] 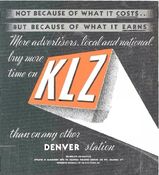 KLZ Channel 7 - More Advertisers, Local And National, Buy More Time On Than On Any Other Denver Station promo from 1953 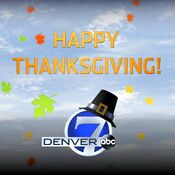