The Federal Communications Commission awarded the license of Kansas City's third and last VHF station to two locally-based radio station operators who competed heavily for the license. The Cook Paint and Varnish Company, which operated WHB radio (then at 710 AM, now at 810 AM) and the Midland Broadcasting Company, owners of KMBC radio (980 AM, now KMBZ), began shared operation of channel 9 on August 2, 1953. Under the arrangement, the two separate stations would each alternate 90 minutes of airtime, broadcasting from separate studios but using the same channel and transmitter. The combined KMBC-TV and WHB-TV operation also carried programming from CBS.

Cook Paint and Varnish purchased Midland Broadcasting's holdings in April 1954, including Midland's television studios under the stage at the Lyric Theatre in Downtown Kansas City. The move ended the split-station arrangement, and on June 14, 1954, KMBC-TV took over channel 9 full-time, absorbing WHB-TV's share of the frequency and ending the split-station arrangement. Cook Paint also sold WHB radio to comply with FCC rules.

In September 1955 KMBC-TV swapped affiliations with KCMO-TV (channel 5, now KCTV), becoming an ABC affiliate. During the late 1950s, the station was also briefly affiliated with the NTA Film Network.[2]

In 1959, Cook Paint and Varnish bought KDRO-TV in Sedalia, Missouri and changed its calls to KMOS-TV on January 28 of that year. KDRO-TV had been the ABC affiliate for the far eastern portion of the Kansas City market, but ABC refused to give it a network feed to protect KMBC-TV, forcing it to switch to and from channel 9's signal during network programming.

Cook Paint and Varnish sold the KMBC stations, and KMOS-TV, to Metropolitan Broadcasting (later Metromedia) in 1961. Metropolitan subsequently spun off KMOS-TV to the Jefferson City News Tribune, then-owner of Jefferson City CBS affiliate KRCG; KMOS became a repeater of that station (KMOS now serves as the PBS member station for Mid-Missouri). Metromedia signed on KMBC-FM (99.7 FM, now KZPT) in the following year, but sold both of the KMBC radio stations to Bonneville International, the broadcasting arm of The Church of Jesus Christ of Latter-day Saints, in 1967.

Over the years, KMBC-TV has pre-empted some ABC programming. Notably under Metromedia ownership, channel 9 passed on The Brady Bunch when it debuted in 1969, but it was picked up a year later. Also, it was one of the few ABC affiliates to pre-empt the ABC Evening News during the late 1960s and early 1970s. Both of these programs were instead broadcast on now-defunct independent KCIT-TV (channel 50, now KPXE-TV). In 1974 Metromedia changed the lease terms of the Lyric Theatre and was given total control of it.

In 1983, KMBC-TV anchor/reporter Christine Craft won a judgment against the station and Metromedia. Craft accused station managers of sexual harassment; this was one of the first such cases to be widely publicized in the United States. Craft, however, lost her case on appeal. Although KMBC had moved up to #1 in the market during the incident in 1981, a focus group said she was "too old, too unattractive and not deferential to men." At the time she was 36 and her co-anchor Scott Feldman was 31.[3]

In the wake of the Craft case Metromedia sold the station to the Hearst Corporation in 1982. Under Hearst, the station expanded its local news production. Hearst also bought the Lyric Theatre. Hearst which began looking for new quarters sold the building in 1990 but the station continued to operate there.

KMBC came under common management as upstart WB affiliate KCWB (channel 29, now CW affiliate KCWE) in 1996 through a local marketing agreement. In March 2008, KMBC began a morning newscast for KCWE, the first regularly scheduled news program for the station. KCWE officially became co-owned with KMBC in May 2010. Although KMBC's licensee name remains "KMBC Hearst Television Inc.," the copyright tag at the end of its newscasts reads "Hearst Stations Inc." which is the licensee name for KCWE.

On August 23, 2007, it moved from the Lyric Theatre to new studios at 6455 Winchester Avenue, near Swope Park. Although its former radio sisters had changed call signs decades ago, KMBC-TV's legal call sign has retained its "-TV" suffix to this day. Under Hearst KMBC was again the focus of a lawsuit filed by female journalists at the station. Maria Antonia, Peggy Breit and Kelly Eckerman sued Hearst in 2008 alleging age and sex discrimination.[4] The lawsuit was settled in 2010.[5]

In 2008, KMBC launched a new digital weather channel that gives up-to-the-minute weather information 24 hours a day on its second digital subchannel. The service is an affiliate of The Local AccuWeather Channel and carries just over the minimum amount of educational and informational (E/I) children's programming. On September 14, 2010, KMBC-DT2 began acting as an independent station during the weeknight 6-11 p.m. time period after it added general entertainment programming in the evening hours under the branding "MOREtv Kansas City" (a branding previously used by sister station KCWE as a UPN affiliate). [6] The subchannel also airs an encore of KMBC's weeknight 6 p.m. newscast at 6:30 p.m. on KMBC-DT2.

It is noted that KMBC is one of several Hearst-owned stations that broadcasts digitally in 1080i rather than the usual 720p like most ABC stations. Hearst ABC sister-stations WMUR-TV in Manchester, New Hampshire, WTAE-TV in Pittsburgh, WCVB-TV in Boston, and KETV in Omaha also uses this format.

KMBC's broadcasts became digital-only effective June 12, 2009. [7] As the Kansas City "nightlight" station, it aired a loop reminding viewers to get a digital converter box on analog channel 9 until July 12, 2009. On February 19, 2009, the station after receiving permission from the FCC for a Special Temporary Authority permit, moved its digital signal from digital channel 7 to channel 29 which had been vacated by sister station KCWE two months before. The station had received viewer complaints about reception due to a combination of Kansas City being an all-UHF digital market besides channel 9 and to address signal conflicts with Pittsburg, Kansas-based KOAM-TV which was allowed to re-utilize its analog channel 7 for its digital channel. It transitioned on February 17 and would have received interference from KMBC-DT as the stations' transmitters are 131 miles (211 km) away from each other much less than the advised 150 miles (241 km) separation between a shared channel. [8] Through the use of PSIP, KMBC-TV's virtual channel is displayed as 9.

KMBC-TV broadcasts all of the ABC network schedule, including network primetime, daytime talk shows and soap operas, Saturday morning children's shows and sports programming. The station also airs The View, Nightline, and Jimmy Kimmel Live! outside of the network's recommended time slots for all three shows, with the latter two delayed due to KMBC airing a block of syndicated sitcoms after its 10 p.m. newscast. Syndicated programming featured on KMBC includes: Dr. Phil, Oprah, Two and a Half Men, Rachael Ray, The Office, Grey's Anatomy, Frasier and The Nate Berkus Show.

From its March 24, 1980 debut until January 3, 2011, KMBC delayed Nightline to midnight, 90 minutes later than most ABC stations that carry it (with only minor exceptions for major breaking news events), a decision that had been long criticized by some ABC network management and even former Nightline host Ted Koppel; Jimmy Kimmel Live!, which follows it, was also delayed similarly since its January 2003 debut. On January 3, 2011 KMBC pushed Nightline and Jimmy Kimmel ahead a half-hour, starting at 11:37 p.m., citing shifting market conditions making a compelling case to air the two programs a half hour earlier and a request by the network to do so during recent negotiations of KMBC's affiliation agreement with ABC.[9]

[1][2]KMBC's news open.Under Hearst, the station expanded its local news production. KMBC currently broadcasts a total of 30½ hours of local news per week (with 3½ hours on weekdays, five hours on Saturdays and 4½ hours on Sundays). During the late 1970s and into the 1980s, KMBC was number one in the area but the station ended the latter decade in second place behind WDAF-TV (channel 4). As soon as that station switched from NBC to Fox in September 1994, KMBC returned to number one. Currently, it generally battles KCTV for first place weeknights at 10 p.m. while continuing to battle WDAF for first place on weekday mornings. In November 2007, KMBC finished the sweeps period first in most newscasts and tying KCTV in the 10 p.m. time period.[10] In February 2008, its newscasts won all of their time periods outright.

In 2007, its news department won seven Edward R. Murrow Awards which is the most by a station in the country. The station won awards in the following categories: news series, feature, news documentary, spot news, continuing coverage, newscast, and overall excellence. KMBC unveiled its new purpose-built facility near Swope Park on August 23, 2007 beginning with the 5 p.m. newscast. The new building includes a news set designed by FX Group. With the relocation, the channel became the first station in the area to air local newscasts in high definition. [11]

For many years, KCWE aired no local newscasts despite being a sister station to KMBC. It cited a fear of cannibalizing the station's audience as a reason not to expand news offerings to KCWE. This changed on March 3, 2008 when that station debuted a two-hour extension of the "FirstNews" morning newscast, from 7-9 a.m. As is the case on KMBC, the KCWE newscast is aired in high definition. On July 30, 2010 like most of its Hearst-owned ABC affiliated sister stations did on that date, KMBC added an hour-long extension of its weekend morning newscast at 8 a.m. On August 23, 2010, this was followed by an expansion of its weekday morning newscast to 2½ hours with the move of the start time to 4:30 a.m. (NBC affiliate KSHB, channel 41, also moved the start time of its morning newscast to 4:30 a.m. on the same date).[12] On September 14, 2010, KMBC launched a half-hour nightly 9 p.m. newscast on KCWE to compete with WDAF-TV's in-house 9 p.m. newscast and the KCTV-produced 9 p.m. newscast on MyNetworkTV affiliate KSMO-TV (channel 62). Management stated the reason behind this was due to The CW's growing ratings.

For the February 2011 sweeps period, KMBC was the #1 news station in the Kansas City market with a total-day quarter-hour household rating average of 6.4; the station tied with WDAF-TV during the 6-7 a.m. hour with a 5.4 rating, though WDAF-TV's morning newscast beat KMBC during the 7-9 a.m. slot while Channel 9 aired Good Morning America. The station also placed first among the market's evening newscasts with a 8.1 rating share at 5 p.m., a 9.2 rating at 6 p.m. and a 9.8 rating at 10 p.m. The station's 9 p.m. newscast on KCWE also scored a 1.4 rating for the month ahead slightly above KCTV's primetime newscast on KSMO but well behind longtime 9 p.m. leader, WDAF-TV.[13] 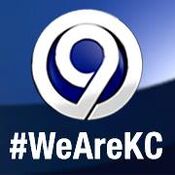 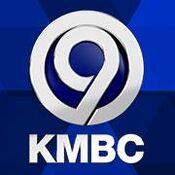 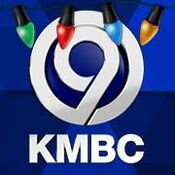 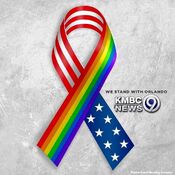 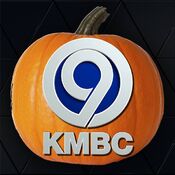 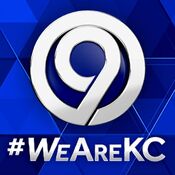 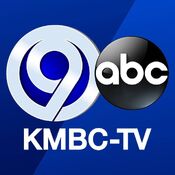 Current Logo (2018-present)
Add a photo to this gallery

Retrieved from "https://annex.fandom.com/wiki/KMBC-TV?oldid=398570"
Community content is available under CC-BY-SA unless otherwise noted.