KHOU is Greater Houston's CBS affiliate television station owned by the Belo Corporation and broadcasting on television channel 11. The studio is near Downtown Houston, along Allen Parkway in the Neartown neighborhood of Houston, Texas,[1][2] and the transmitter is at an antenna farm located in unincorporated northeastern Fort Bend County, along with all other Houston broadcast stations.

KHOU signed on as KGUL-TV (as in gulf or as in "seagull" ), licensed to Galveston, on March 23, 1953 by Paul Taft of the Taft Broadcasting Co.[3] (not related to Taft Broadcasting Company of Cincinnati, Ohio). It was the second television station to launch in the Houston area afterKPRC-TV. One of the original investors in the station was actor James Stewart, along with a small group of other Galveston investors.

In June 1959, it changed its calls to KHOU and moved the city of license to Houston. The FCC license listed both the Houston and Galveston service areas for a time. On April 24, 1960, the station moved to its present location just outside downtown Houston on Allen Parkway. To this date, KHOU is the only TV station in Houston to have its primary studios close to the downtown area.

In 1956, the original owners sold Channel 11 to the Whitney Corporation (later Corinthian Broadcasting) of Indianapolis, which became a subsidiary of Dun & Bradstreet in 1971. In 1984, D&B sold the Corinthian stations to Belo.

In 1998, it was the first station to sign on with a high-definition signal.

The KHOU studios were flooded during Tropical Storm Allison in 2001, resulting in damage to much of the station, including its newsroom. The flooding was so bad, the station had to shut down and air a feed from the station's doppler radar for roughly 90 minutes.

During Hurricane Ike, which hit the Texas Gulf Coast the weekend of September 12–14, 2008, KHOU's coverage was distributed nationwide via DirecTV and XM Satellite Radio, as well as a live feed on the station's Web site.

Since the June 12, 2009 digital transition, KHOU-DT moved to channel 11, and then by the following week, the station dropped the -TV suffix like most Belo stations.

KHOU ended programming on its analog signal, on VHF channel 11, on June 12, 2009, as part of the DTV transition in the United States. [4] The station then moved back to channel 11 for its post-transition operations. [5]

KHOU has been one of the top-rated CBS affiliates in Texas for over 20 years, aided by a strong programming lineup featuring popular syndicated shows like The Oprah Winfrey Show,The Doctors , Jeopardy!, Wheel of Fortune and The Insider.

It airs The Late Late Show with Craig Ferguson a half an hour later than the network schedule at 12:05 a.m. Episodes of Jeopardy! air in the Late Late Show's normal network timeslot instead at 11:37 p.m. In addition, KHOU exercises CBS's seldom-used option to air The Young and the Restless at 11:00 a.m., a half-hour before most CBS affiliates air the show.

Beginning in the late 1980s, KHOU hired several high-profile people to its news team. The most notable was Neil Frank, the former director of the National Hurricane Center, who was tapped by the station to be the chief meteorologist starting in July 1987. In another key move, the station also hired former KTRK anchor Sylvan Rodriguez away from his job at the West Coast bureau of ABC News to anchor the station's early evening newscasts. KHOU also began to use the "Spirit of Texas" slogan and TM Productions' "Spirit" music package (also used at sister station WFAA in Dallas), and incorporated a redesigned logo.KHOU has been widely regarded as a stepping stone for television news anchors reporters, as many of its reporters have gone on to assignments with national networks. The station's best known former staff are former CBS Evening News anchor Dan Rather, NBC NewsCorrespondent Dennis Murphy and newswomen Linda Ellerbee and Jessica Savitch. In sports, there was Jim Nantz, a sports anchor/reporter, now with CBS Sports and Ron Franklin, a sports anchor now with ESPN.

In January 1989, KHOU revamped the look of its newscasts, with an image campaign that included full-page ads in the Houston Chronicle andHouston Post, as well as an on-air promotional campaign that focused more on ordinary citizens throughout Greater Houston than on its news team. With the lead news team of anchors Steve Smith and Marlene McClinton, chief meteorologist Dr. Neil Frank and sports director Giff Nielsen, along with a new set, graphics and theme music, KHOU began to mount a serious challenge to the other Houston newscasts, leading to a competitive ratings race during the 1990s.

If any year proved to be a breakout year for KHOU, it was 1999. During the May sweeps of that year, KHOU reached number one in several timeslots, unseating KTRK at midday, 5 p.m. and 6 p.m. The station's ratings boost also included an exclusive interview with Serbian and Yugoslavian President Slobodan Milosevic during the Kosovo War just a month before Milosevic's indictment. This news came despite the retirement of longtime anchor Steve Smith, anchor Sylvan Rodriguez's eventually fatal bout with pancreatic cancer and the abrupt resignation of fellow anchor Marlene McClinton during one of the station's newscasts.

On September 7, 2009, KHOU-TV launched Houston's third morning newscast to begin at 4:30 a.m., called 11 News First Look. The newscast is anchored by former KIAH (channel 39) anchor Sherry Williams, with meteorologist David Paul. Despite being the last station in the Houston market to launch its early-morning newscast, KHOU was the first station in the market to send a news release announcing its intentions to do so. In a race to capture the lucrative insomniac/very early commuter market, all three major network affiliates in Houston launched 4:30 a.m. newscasts within three weeks of each other in the late summer of 2009.

KHOU's is currently second place in the Houston market behind KTRK. However they rank well among middle aged (35-55) and suburban audiences. This is noted as currently as of 2011, KHOU is the only station that focuses traffic in the suburbs in addition to the Houston freeways.

KHOU also has gained a reputation for its investigative news team, the 11 News Defenders, which has uncovered numerous stories, the most notable being its 2000 investigation into defective tire designs by Firestone. That investigation led to the mandatory recall of Wilderness AT, Firestone ATX and ATX II tires, as well as numerous lawsuits. The defective tires resulted in a number of deaths, including that of Stephen Gauvain, a reporter for rival ABC affiliate KTRK.

Another investigative report in the early 2000s by former reporter Anna Werner led to the shutdown of the Houston Police Department's crime lab. The 11 News Defenders unit has also exposed allegations of dropout rate fraud in the Houston Independent School District, which resulted in the dismissal of several HISD officials. The unit was briefly rebranded to the name "11 News Investigates" on July 24, 2006, when KHOU unveiled a new look on its newscasts. The name was switched back to "Defenders" in 2008 to distinguish the unit after several local stations in the market also began using the "Investigates" label. In 2010, the station's investigative team was rebranded the "11 News I-Team." 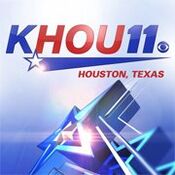 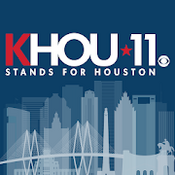 Weather (In order of rank)

Sports (In order of rank)

Retrieved from "https://annex.fandom.com/wiki/KHOU_(TV)?oldid=397556"
Community content is available under CC-BY-SA unless otherwise noted.