KGBT-TV or Action 4, is a CBS affiliate located in Harlingen, Texas. Its market includes the greater Rio Grande Valley metropolitan area. KGBT is currently owned by Sinclair Broadcasting Group. Its transmitter is located in Cameron County, Texas. The digital channel is available in standard definition and high definition on Time Warner Cable on channels 4 and 865 respectively. KGBT's own local 24-hour weather channel is also available on Time Warner Cable digital channel 366. KGBT is also available on channel 4 in both standard definition and high definition on DirecTV and Dish Network

The history behind what is now KGBT dates back to the mid 20th century. The station originally began as KGBT Radio, owned then by the Harbenito Broadcasting Company (now Univision Radio after several mergers). It opened in 1941 as KGBS, an independent radio station of 250 watts and a staff of eleven people. KGBT became an affiliate of the CBS in January 1944, becoming the first CBS radio affiliate in lower South Texas. KGBT's TV offshoot signed on in 1953, and has always been a CBS affiliate. Until 1976, it shared ABC programming with then-NBC affiliate KRGV-TV; when that station became a sole ABC affiliate that year, KGBT-TV took on a secondary NBC affiliation until 1981 when KVEO began operations. It is the only major English-language station in the Rio Grande Valley never to have changed its primary network affiliation.

KGBT was actually the second television station in the valley. The first was XELD-TV, a station on channel 7 in Matamoros, which had opened in 1951, and operated primarily in English, although it was licensed as a Mexican station. XELD-TV's fortunes declined with the opening of KGBT, and it closed soon after KRGV opened, in 1954. Eventually channel 7 in the valley was taken over by XHAB, a local Televisa station.

KGBT-TV was founded by the Tichenor family, whose media holdings (the Harbenito Broadcasting Company) later became Tichenor Media Systems, a regional conglomerate of Spanish-language radio stations. In 1986, Tichenor decided to exit the English-language broadcasting market by selling KGBT-TV to the Draper Holdings Business Trust, the owner of WBOC-TVin Salisbury, Maryland; Tichenor retained the KGBT radio stations until 2003 when their company (which became the Hispanic Broadcasting Corporation by the late 1990s) merged withUnivision Communications. In 1998, Draper sold KGBT-TV to Cosmos Broadcasting, the broadcasting division of The Liberty Corporation. Cosmos came directly under the Liberty banner in 2001 when Liberty sold off its insurance business. Liberty merged with Raycom Media in 2006. In August of that year, KGBT-TV was sold again to Barrington Broadcasting.  In 2013, KGBT-TV was purchased by Sinclair Broadcasting Group.

KGBT-TV was the first, and still remains the only, news station in the metropolitan area with its own live weather radar, named "Live Super Doppler". KGBT uses this as a marketing ploy to attract a bigger audience, as its radar can accurately predict when severe weather will strike with accuracy to the minute. (See below)

KGBT-TV also broadcasts a 24-hour weather station to TimeWarner customers under channel 366 (digital cable only), showing off its live doppler radar as well as updated local forecasts. This feature is very similar to those adopted in most major markets, such as News 8 Austin's doppler radar channel available to Austin Time Warner customers.

On April 29, 2008, KGBT-TV's 43-year veteran weatherman, Larry James, suddenly retired. He refused to comment on what happened other than to say that he was called in to the manager's office and within 10 minutes found that he no longer was employed. He was allowed to remove personal belongings from his desk but was denied access to his e-mail. Those in charge of the station have refused to comment. James was the last of the on-air personnel from what many Valley residents consider the station's "glory days" during the late 1960s and 1970s when it had studios in central Harlingen and the top-rated newscast in the Rio Grande Valley.

As of January 2009, KGBT-TV's "Live Super Doppler Radar" is no longer in use. Neither is KGBT-TV's 24-Hour weather station on Time Warner Cable channel 366. KGBT has not released any information why or when these services will be back up.

During the fall, Sports Extra is an extended Sports segment that airs Fridays and Sundays following Action 4 News at 10 p.m. in place of the regular sports segment and are known as "Friday Sports Extra" and "Sunday Sports Extra", respectively. The Friday edition's main focus is the local high school football games played that night and on occasion the previous Thursday. Clay Wiliams provides scores and highlighs from the studio while Brendan Fitzgerals and Alex Del Barrio travels the Valley to bring live post-game coverage of Action 4's Games of the Week.

Prior to the start of the High School Football Season, KGBT produces the "Action 4 Sports: Countdown to Kickoff". The hour long special briefly previews each team in the Valley and their respective Districts. Clay, Darren then make their predictions for Playoff teams from each District.

Like many other HD channels on the local Time Warner Cable system, KGBT-DT can be picked up on basic cable by connecting the cable directly into an HDTV with a built-in QAM tuner, channel 116.1

For years, KGBT-TV has preempted CBS News Sunday Morning in favor of Tejano music shows, the most popular being the long-running locally-produced program, Aqui Rogelio. The Spanish-language music show premiered in 1970, while Sunday Morning premiered nine years later, although the station has aired Face the Nation at a later time.

In 2005, after years of Tejano programming on Sunday mornings, CBS News Sunday Morning was shown for the first time to viewers of the Rio Grande Valley. Aqui Rogelio, which originally aired at 8:00am, was moved to 10:00am, where it remained there until it went off the air several months later. 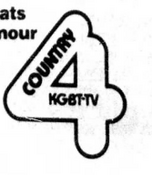 Retrieved from "https://annex.fandom.com/wiki/KGBT-TV?oldid=394363"
Community content is available under CC-BY-SA unless otherwise noted.