KDKA-TV, channel 2, is an owned and operated television station of the CBS Television Network, located in Pittsburgh, Pennsylvania, USA. KDKA-TV broadcasts from a transmitter located in the Perry North neighborhood of Pittsburgh, and its studios are located in downtown Pittsburgh at Gateway Center. The facility also houses WPCW (channel 19, Pittsburgh's CW affiliate). Syndicated programming on the station includes: Dr. Phil, Extra and The Insider.

The station went on the air on January 11, 1949, as WDTV (W DuMont TeleVision) on channel 3, owned and operated by the DuMont Television Network. It was the third and last DuMont-owned station to go on the air, behind WABD (now WNYW) in New York City andWTTG in Washington, D.C.. To mark the occasion, a live television special aired that day from 8:30pm to 11pm, with live segments from DuMont, CBS, NBC, and ABC.[1] The station also represented a milestone in the television industry, providing the first "network" that stretched from New England/East Coast to the Mississippi River and beyond.[2] WDTV was one of the last stations to be granted a construction permit before the Federal Communications Commission imposed what turned out to be a four-year freeze on new licenses.

When the release of the FCC's Sixth Report and Order ended the license freeze in 1952, DuMont was forced to give up its channel 3 allocation to alleviate interference with nearby stations broadcasting on the frequency. WDTV moved its facilities to channel 2 on November 23, 1952. Not long after moving, WDTV became the first station in the country to broadcast 24 hours a day, 7 days a week.[3] At the time Pittsburgh was the fourth-largest market in the country, behind New York City, Chicago and Los Angeles.

Until the end of the freeze, WDTV's only competition came in the form of distant signals from stations in Johnstown, Altoona,Wheeling, West Virginia and Youngstown, Ohio. However, Pittsburgh saw two UHF stations launch during 1953 -- ABC affiliate WENS-TV (channel 16, later to become WQEX), and WKJF-TV (channel 53, later to become WPGH-TV), an independent. At the time, UHF stations could not be viewed without the aid of an expensive, set-top converter, and the picture quality was marginal at best with one. UHF stations in the area faced an additional problem because Pittsburgh is located in a somewhat ruggeddissected plateau, and the reception of UHF stations is usually poor in such terrain. These factors played a role in both WKJF and WENS being short-lived.

Meanwhile, Pittsburgh's other VHF stations were slow to develop. This was because the major cities in the Upper Ohio Valleyare so close together that they must share the VHF band. After the FCC lifted the license freeze in 1952, it refused to grant any new commercial VHF construction permits to Pittsburgh in order to give the smaller cities in the area a chance to get on the air. As a result, WDTV had a de facto monopoly on Pittsburgh television. Like its sister stations WABD and WTTG, it was far stronger than the DuMont network as a whole. According to network general manager Ted Bergmann, WDTV brought in $4 million a year, which helped sustain the network. Owning the only viewable station in such a large market gave DuMont considerable leverage in getting its programs cleared in large markets where it didn't have an affiliate. As CBS, NBC and ABC had secondary affiliations with WDTV, this was a strong incentive to stations in large markets to clear DuMont's programs or risk losing valuable advertising in the sixth-largest market. WDTV aired all DuMont network shows live and "cherry-picked" the best shows from the other networks, airing them on kinescope on an every-other-week basis.

WDTV's sign-on was also significant because it was now possible to feed live programs from the East to the Midwest and vice versa. In fact, its second broadcast was the activation of the coaxial cable linking New York and Chicago. It would be another two years before the West Coast received live programming, but this was the beginning of the modern era of network television.

Meanwhile, Pittsburgh-based Westinghouse Electric Corporation had been competing with local politicians to acquire the non-commercial channel 13 license from the FCC, as no other Pittsburgh-allocated VHF station would be signing on for the foreseeable future. After launching WBZ-TV inBoston in 1948 and purchasing two other TV stations, Westinghouse was growing impatient with not having a station in its own home market. Westinghouse later offered a compromise plan to the FCC, in which the Commission would grant Westinghouse the channel 13 license; Westinghouse would then "share" the facility with the educational licensee. Finding the terms unacceptable, Pittsburgh attorney Leland Hazardcalled Westinghouse CEO Gwilym Price to ask him if he should give up on his fight for public television. Price said that Hazard should keep fighting for it, giving Westinghouse backing for the station that would eventually become WQED.[5]By 1954, DuMont was in serious financial trouble. Paramount Pictures, which owned a stake in DuMont, vetoed a merger with ABC who had merged with United Paramount Theaters, Paramount's former theater division, a year before. A few years earlier, the FCC had ruled that Paramount controlled DuMont and there were still lingering questions about whether UPT had actually broken off from Paramount. Paramount didn't want to risk the FCC's wrath.

Westinghouse then turned its attention to WDTV, offering DuMont a then-record $10 million for the station in late 1954. Desperate for cash, DuMont promptly accepted Westinghouse's offer. While the sale gave DuMont a short-term cash infusion, it eliminated DuMont's leverage in getting clearances in other major markets. Within two years, the DuMont network was no more. After the sale closed in January 1955, Westinghouse changed WDTV's call letters toKDKA-TV, sistering it to Westinghouse's pioneering radio station KDKA (1020 AM; and later to 92.9 FM, now WLTJ). As such, it became one of the few stations east of the Mississippi with a "K" call sign.

As KDKA radio had long been an NBC affiliate (due to corporate ties between Westinghouse and NBC dating back to 1926, when Westinghouse was a co-founder and part-owner of NBC), KDKA-TV hoped to become a primary affiliate of NBC. But that network was seeking to purchase Westinghouse's Philadelphia stations, KYW radio and WPTZ-TV (now KYW-TV) and used coercion, in the threat of withholding a primary affiliation with KDKA-TV, as an enticement for Westinghouse to agree to swap those stations for NBC's stations in Cleveland. The decision would lead to an acrimonious relationship between Westinghouse and NBC in later years. [6][7] Channel 2 became a primary affiliate of the higher-rated CBS network instead. KDKA-TV retained secondary affiliations with NBC until WIIC-TV (channel 11, now WPXI) signed on in 1957, and ABC until WTAE-TV (channel 4) signed on in 1958. KDKA-TV became the flagship station of Westinghouse's broadcasting arm, Group W.

The WDTV calls now reside on a CBS affiliate located 130 miles south in Weston, West Virginia, which is unrelated to the current KDKA-TV. That station, which signed on after KDKA-TV adopted its current call signs, did adopt those calls "in honor" of KDKA-TV.

Starting in 1993, KDKA stopped running CBS This Morning and instead ran Disney's syndicated cartoon block. A year later, Westinghouse made a long-term deal with CBS to convert the entire five-station Group W television unit to a group-wide CBS affiliation. In the fall of 1994 channel 2 began running the entire CBS lineup in pattern, as it, and sister station KPIX-TVin San Francisco, were already affiliated with the network.

In early 1996, Westinghouse acquired CBS, making KDKA-TV a CBS owned-and-operated station, after four decades as being simply a CBS affiliate. In 1997, Westinghouse became CBS Corporation, which would then merge with Viacom in 2000, making KDKA a sister station with Pittsburgh UPN (now The CW) affiliate WNPA-TV (now WPCW). Five years later Viacom became CBS Corporation and spun off a new Viacom.

On September 1, 2010 KDKA-TV debuted the same graphics and music package that WCBS-TV, KYW-TV and KCBS-TV have.

KDKA-TV is also available on cable in the Johnstown, Altoona and Wheeling areas, as well as several other out-of-market cable systems in northwestern Pennsylvania, northwesternMaryland, northeastern Ohio, and North-Central West Virginia. The furthest south KDKA is carried on cable is in Beverly, West Virginia. This is not far from the Virginia state line near Monterrey.

In August 2007, KDKA-TV revealed a new image campaign, entitled Your Home, with music and lyrics performed by singer-songwriter Bill Deasy. The promo features scenes of Pittsburgh and its surrounding areas, as well as three of the station's personalites. In September 2007, the station unveiled another promo featuring the Joe Grushecky song "Coming Home." Later, a third spot was introduced, called "Long Way Home," and features the voice of Kelsey Friday.[9]

KDKA-TV and sister station WPCW do not make use of its digital subchannels.

As part of the analog television shutdown and digital conversion, KDKA-TV shut down its analog transmitter on Friday, June 12, 2009, during the Late Show with David Letterman.

On Tuesday June 16, 2009, KDKA-TV launched in HD during its noon broadcast, with a new set and weather center. Like rival WTAE, only the in-studio cameras are in HD while most of the content, including field reports and video footage, are in pillarboxed 4:3 standard definition.

In January 2009 KDKA-TV celebrated 60 years on being on the air.

KDKA-TV News - Coronavirus open from May 2020 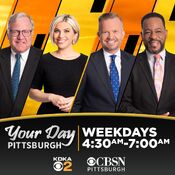 Retrieved from "https://annex.fandom.com/wiki/KDKA-TV?oldid=615467"
Community content is available under CC-BY-SA unless otherwise noted.