KDBC-TV is the CBS affiliate in El Paso, Texas. The station is owned by the Titan TV Broadcast Group. It broadcasts its digital signal on UHF channel 18. Its new digital subchannel carries My Network TV.

The station is located at 2201 E. Wyoming Avenue in El Paso (ZIP code 79903). Its transmitter is also located in El Paso.

The station first signed on the air on December 14, 1952 as KROD-TV; it was the first television station to sign on in the El Paso market. The station was founded by Dorrance Roderick, owner of KROD radio (600 AM) and the El Paso Times. The station's original studio facilities were located on Wyoming Avenue in El Paso. Early programs on the station included the children's shows Red Brown and Anna Lee and Bozo's Big Top, and wrestling program Mitchell's Mat Time. The station has been a CBS affiliate since its sign-on, however it maintained secondary affiliations with ABC and the DuMont Television Network until 1956 (it lost the ABC affiliation to KILT (channel 7, now KVIA-TV) and lost DuMont as a result of the network's decision to cease operations). During the late 1950s, the station was also briefly affiliated with the NTA Film Network. Roderick sold the station to Trigg-Vaughn of Dallas, Texas in 1959.

The station was sold to the Doubleday Broadcasting Company in 1967. On May 29, 1973, it changed its call letters to KDBC-TV, to reflect the change in the station's ownership. Doubleday Broadcasting sold the station to Portal Communications, a subsidiary of the Evening Post Publishing Company in 1974. Its original transmitter site was located south of Comanche Peak in El Paso. A road was built to the site, and a 288-foot (88 m) tower was constructed. A building was assembled from native rock chipped from the site. The station went on with a temporary transmitter (small RCA) and eventually added a 10 kW RCA TT-10AL transmitter and broadcast at an effective radiated power of 61 kilowatts at 1,150 feet (350 m). The site is now used as a backup facility for channel 4, and many local FM radio stations transmit from this building.

In 1984, the station moved farther up the hill to Comanche Peak. A 440-foot (130 m) tower was built and a new transmitter was installed (one of the last of the RCA TT-25GLs to become operable). The station increased its effective radiated power to 100 kW and increased the height of its transmitter to 1,540 feet (470 m). BTSC stereo also commenced with the move to the new site.

In 1986, the station was acquired by United Broadcasting, then-owners of KARK-TV in Little Rock, Arkansas and WTOK-TV in Meridian, Mississippi. Columbus, Mississippi-based Imes Broadcasting bought KDBC in 1988 after United Broadcasting was taken over by investment firm Merrill Lynch. Imes exited the television business in the late 1990s, and sold KDBC to Pappas Telecasting Companies in 1999, with the intent to convert the station into a charter affiliate of Azteca América, a fledgling Spanish-language network that was co-owned at the time by Mexican network TV Azteca and Pappas. Plans for the affiliation were canceled following outcry from viewers and station employees (especially over the fact that no other station in El Paso was interested in joining CBS); as a result, the station renewed its affiliation contract with CBS (Azteca América and Pappas ended their affiliation relationship in mid-2007; Azteca América has been carried on the fourth digital subchannel of KVIA-TV since early December 2010).

On February 22, 2006, News Corporation announced the launch of a new "sixth" network called MyNetworkTV, which would be operated by Fox Television Stations and its syndication division Twentieth Television. MyNetworkTV was created to compete against another upstart network that would launch at the same time that September, The CW (an amalgamated network that originally consisted primarily of UPN and The WB's higher-rated programs) as well as to give UPN and WB stations that were not mentioned as becoming CW affiliates another option besides converting to independent stations.[4][5] On April 18, Pappas Telecasting signed an affiliation agreement with MyNetworkTV for KDBC to serve as the market's MyNetworkTV affiliate. KDBC began carrying MyNetworkTV programming on a newly launched second digital subchannel that debuted on September 5, 2006.

On January 16, 2009, Pappas announced that it would sell several of its television stations, including KDBC, to New World TV Group (now the Titan TV Broadcast Group), after the sale received United States bankruptcy court approval.

On October 19, 2009, Communications Corporation of America, owner of NBC affiliate KTSM-TV (channel 9), entered into a shared services agreement with Titan TV for KTSM to provide advertising sales and administrative services as well as some news resources for KDBC-TV; Titan retained KDBC's license. and both stations nominally retained separate news departments. However, KTSM was heavily criticized for reducing KDBC's newscasts to near-rebroadcasts with heavy story sharing of their own newscasts which made both news departments indistinguishable from one another on-air.

On April 23, 2013, Titan TV Broadcast Group filed an application with the Federal Communications Commission to sell KDBC-TV and its low-power repeaters to Cunningham Broadcasting. Nearly all of Cunningham Broadcasting's stock is controlled by trusts held in the names of the children of Sinclair Broadcast Group founder Julian Sinclair Smith (Sinclair had finalized its purchase of Fox affiliate KFOX-TV (channel 14) from the Cox Media Group by this time), which would result in Sinclair effectively running a virtual duopoly in the El Paso market that circumvented FCC ownership rules. The following day, it was announced that the Communications Corporation of America stations, including KTSM-TV, would be sold to the Nexstar Broadcasting Group. The sale of KDBC was consummated on July 31. One week later, Sinclair exercised its option to purchase KDBC outright from Cunningham Broadcasting.FCC duopoly regulations normally disallow two of the four highest-rated stations (which usually constitute stations affiliated with the "Big Four" networks) from being directly owned by a single entity. However, in this case, Sinclair cited that KDBC is ranked fourth overall in the El Paso market while KFOX placed sixth in total-day viewership. In addition, FCC regulations require a market to be left with eight unique owners after a duopoly is formed, and Sinclair noted in its application that the El Paso–Las Cruces market would still have eight unique owners (not counting Mexican stations that also serve the market) after Sinclair completed its acquisition of KDBC. The FCC approved the sale on September 23, and the transaction was formally completed on October 1, creating a duopoly with KFOX-TV. Sinclair later announced plans to purchase a new studio facility using an existing building to house the two stations on South Alto Mesa Drive on the city's west side. The new facility opened at the end of September 2014. Sinclair also announced its intention to invest heavily in KDBC to make it a factor in the market once again.

The station's second subchannel shares an affiliation with Sinclair's American Sports Network with it sister station KFOX and KVIA.

On June 2, 2009, KDBC announced it has terminated its analog signal because of technical difficulties[6][7] ten days before the scheduled analog television shutdown and digital conversion on June 12,[8] thus becoming the first television station in the El Paso area to transmit solely in digital. KDBC-TV remains on its transition period channel number, 18.[9] However, through the use of PSIP, digital television receivers will display KDBC-TV's virtual channel as 4.

Among the station's most famous broadcasters was weatherman Howell Eurich, who also worked as El Paso's version of Bozo the Clown during the 1960s and 1970s. Eurich committed suicide in 1982 following a divorce from his wife and fellow KDBC weather anchor Gail Gordon. 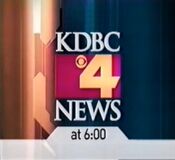 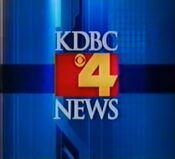 Retrieved from "https://annex.fandom.com/wiki/KDBC-TV?oldid=520567"
Community content is available under CC-BY-SA unless otherwise noted.