KCTV, channel 5, is the CBS-affiliated television station for the Kansas City Metropolitan Area that is licensed to the Missouri side. Owned by the Meredith Corporation, the station is sister to MyNetworkTV affiliate KSMO-TV (channel 62) and the two share facilities on Shawnee Mission Parkway (a.k.a. U.S. 56 / U.S. 169) in Fairway, Kansas.

The station debuted on September 27, 1953 as KCMO-TV (for Kansas City, MissOuri). The station was owned by the KCMO Broadcasting Corporation along with KCMO-AM (then at 810 kHz now at 710 kHz). It was originally an ABC affiliate with DuMont programming. A week after its launch, Meredith Broadcasting bought KCMO-AM-TV and this merger was completed less than two months later.[1] In 1955, it took the CBS affiliation from KMBC-TV (channel 9). Its call letters were changed to the current KCTV in 1983 when Meredith sold off KCMO-AM-FM. At the same time, the station moved from it original studios (now occupied by KCPT) next to its landmark tower (see below) to its current facilities in Fairway.

When New World Communications announced its purchase of then-NBC affiliate WDAF-TV (channel 4) in 1994 with its intention to switch that station's affiliation to Fox, NBC briefly wooed KCTV. However, CBS persuaded Meredith to switch two of its stations—KPHO-TV (channel 5) in Phoenix, Arizona and WNEM-TV(channel 5) in Bay City, Michigan—to that network as a condition of keeping CBS on channel 5. NBC was thus forced to affiliate with the E. W. Scripps Company-owned KSHB-TV(channel 41, the soon-to-be-former Fox affiliate) since KMBC-TV was in the middle of a long-term affiliation agreement with ABC. In 2005, Meredith purchased the area's WB affiliate KSMO-TV from the Sinclair Broadcast Group, creating Kansas City's third duopoly operation.[2]

KCTV ended analog operations at 9 a.m. on June 12, 2009, as part of the DTV transition in the United States. The station remained on its pre-transition channel 24. Through the use ofPSIP, KCTV's virtual channel is displayed as 5.[3]

top third flashing = thunderstorm watch / tornado watch / winter weather advisoryKCTV's 1,042-foot (318 m) transmitter tower at its former studios on East 31st Street on Union Hill south of Downtown Kansas City is a widely recognized Kansas City landmark. This is due largely in part to the string lights on the four corners of the tower that can be seen for miles around at night. It is so recognized that for a time the "tall tower" (as it was called on-air) was the official logo of KCTV. For many years, the station flashed the lights on the tower due to inclement weather in Kansas City and the immediate surrounding communities in three sections:

In June 2010, the analog antenna was disassembled and lowered to the ground to allow a new top mounted digital antenna improving coverage of KCTV's digital signal. The tower is similar to the 750-foot (228.6 m)KQTV tower in St. Joseph, Missouri. Coincidently, that station (which serves as the ABC network affiliate for the St. Joseph market) had also begun broadcasting on September 27, 1953.After the September 11 attacks, KCTV changed the tower to red/white/blue with the top third red and the bottom third blue. The lights on the tower went dark for a period until all of the light bulbs could be changed. On July 1, 2006, it turned the tower back on in all white lights as it had originally been until the 1970s. The lights do not flash as they did before September 11, 2001.

KCTV currently carries all CBS network programming, though due to the Sunday morning edition of KCTV 5 News This Weekend, Face the Nation is generally delayed to Sunday late nights; the station also is one of several CBS affiliates to split the network's Saturday morning children's programming to Saturday and Sunday mornings, as one hour of the lineup airs on Sunday mornings before CBS News Sunday Morning. Syndicated programming on KCTV includes: Inside Edition, Ellen, The Insider, CSI: NY, Scrubs and Live with Regis and Kelly.

Over the years, the station would preempt moderate amounts of CBS programming such as some morning daytime shows, Sunday morning cartoons, a couple Saturday morning cartoons, an occasional primetime show, and some late night shows prior to David Letterman's arrival to CBS in 1993. Today, KCTV still runs a large amount of local news along with most every CBS program.

One of the most common copies of The Star Wars Holiday Special comes from this station.[citation needed] It can be found as first generation bootleg copies all the way down to the third generation. Also during the 1970s into the 1980s, it was very active in locally-produced shows such as Saturday Science Fiction Theatre. It was during the Hyatt Regency Tragedy that one of the station's most popular shows, Friday Fright Night, was preempted for the fear of further traumatizing viewers already in shock. Friday Fright Night was known for its opening sequence of a skull with an announcer giving the lead-in with both a spooky tone of voice and dialogue only to leave the shot with a prolonged sequence of hysterical-sounding laughter. At least two other shows competed in the genre with Friday Fright Night by the early 1980s including Creature Feature with Crematia Mortem and All Night Live! with "Uncle Ed" and "Caffeina the Cat" and later Dick Wilson. However, "Uncle Ed" Muscare had various spook-shows going back to the 1960s albeit in different markets.

In Fall 2005, KCTV began producing a nightly 9 o'clock broadcast for KSMO to compete with WDAF's news show. In May 2006, this station acquired a new helicopter called "Chopper 5". During September 2008, it was announced that KCTV would get a new high definition set and become the third station in Kansas City (after KSHB and KMBC) to broadcast local news in HD. The station began broadcasting its newscasts in high definition on October 20, 2008 beginning with its 4 p.m. newscast. The KSMO shows were included in the upgrade.

KCTV and former News Director Regent Ducas came under fire in recent years for bringing what some call tabloid-style reporting to the market. "Live. Latebreaking. Investigative." became KCTV's new slogan (also the slogan of sister station KPHO in Phoenix) in September 2002 six months after Regent's hiring. A year later, this station's sports department was shut down and sports news was outsourced to Metro Sports (a local cable channel operated by Time Warner Cable) with most of the KCTV former sports personnel making the move; this practice continued until 2009.[4] KCTV had no official sports department; however on March 25, 2010, it announced that sports segments produced in-house would be returning and that a sports director had been hired.

As a result of the station's "new direction", several high-profile anchors and reporters left including Anne Peterson, Russell Kinsaul (who is now working across the state in St. Louis at CBS affiliate KMOV), and Dave Helling. A May 26, 2007, article in The Kansas City Star revealed the turbulence behind KCTV's move to become the #1 newscast producer in the market. A lawsuit filed by a longtime newscast director alleges that the station's owners engaged in systematic harassment and dismissal of older workers. The judge denied KCTV's move to dismiss the suit and the station settled with the plaintiff according to an article in the newspaper.[5][6]

In April 2010, Greg Adaline and Kelly Jones assumed roles as the new morning anchors for More In The Morning. Adaline moved to his anchor position from his role as a morning news reporter and Kelly Jones joined the morning team from KFMB in San Diego. On September 13, 2010 KCTV will expand its weekday morning newscast to 4½ hours, becoming the third television station in Kansas City to begin its morning newscast at 4:30 a.m. (ABC affiliate KMBC and NBC affiliate KSHB moved the start time of their morning newscasts to 4:30 a.m. on August 23, 2010).[7] On October 12, 2010, KCTV announced that it would begin airing obituaries during the noon newscast and the weekday morning newscast on sister station KSMO, citing concerns caused by the decline of newspaper circulation. KCTV and parent Meredith Corporation also launched two websites, ObitMissouri.com and ObitKansas.com to provide online obituaries, detailed information on the deceased and memorial service information to Kansas City-area residents.[8]

On January 4, 2011 KCTV announced that it had formed a news share partnership with Kansas City Star, in which the station and the newspaper will partner together on local news stories and KCTV will provide weather forecasts for the paper. Incidentally, the Star put rival station WDAF-TV on the air in 1949 and owned it until 1958, and KSHB-TV already had a news share partnership with the Star until the announcement was made.[9]

The station has not shied away from reporting on controversial topics two of which were featured nationally by CBS. KCTV aired a seven-part series in February 2004 that exposed the dangers children can face in internet chat rooms. A group called "Perverted Justice" posed as minors in chat rooms and waited for adult men to proposition them for sex. The "minors" then invited the men to meet them at a house where KCTV was waiting. Dateline NBC later used "Perverted Justice" as the basis for its To Catch A Predator series. After the series aired, local law enforcement made a new effort to police chat rooms and prosecute men who attempt to meet minors for sex through the internet. None of the people "stung" by KCTV could be charged in these cases because the operation was done without police involvement.

In June 2005, KCTV exposed a doctor's negligent handling of private medical records. A scavenger gave the station a computer found at the curb of a Mission Hills, Kansas plastic surgeon's home. The plastic surgeon claimed he erased the patients' information from the computer. However, only the computer's random access memory was removed. Its hard drive was intact and contained photos and files on many patients. KCTV attempted to contact several of the patients whose information was found on the discarded computer. The surgeon sued citing that interviewing the patients violated medical confidentiality. The judge ruled in favor of the doctor although KCTV took the case to federal court in Kansas City, Kansas. The doctor withdrew his lawsuit and the story aired on June 30. As a result of this, several of the surgeon's patients filed a class action lawsuit against him for negligent handling of their confidential records.

From 1979 to 1994, KCTV's Anne Peterson and Wendall Anschutz were Kansas City’s top-rated news anchor team.[10] In November 2004, KCTV won the coveted 10 p.m. news race unseating KMBC for the first time in a decade. However in November 2006, KCTV dropped back to second place at 10. The station remained in third place at 5 and 6 o'clock after KMBC and WDAF-TV. In February 2007, KCTV regained the top spot at 10 o'clock and most of its other newscasts made viewership gains as well.[11] 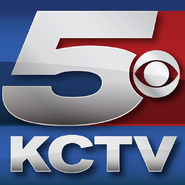 As featured in news footage from the 1960s, KCMO branded itself as "Television 5". The branding was simplified to "TV 5" when the Eyewitness News format was adopted and continued into the 1980s. When Meredith separated KCMO radio from KCMO-TV, the "KCTV" calls were adopted based on the familiarity of the "TV 5" branding. A font similar to that of co-ownedWNEM-TV was then adopted and a new slogan brought forth: "TV 5 Loves You". The advertised "TV 5" branding ended in 1990 when a new logo was adopted and KCTV took on the "Kansas City's News" slogan simply taking on the "KCTV Kansas City" branding.

Retrieved from "https://annex.fandom.com/wiki/KCTV?oldid=518860"
Community content is available under CC-BY-SA unless otherwise noted.