KCIT is a Fox affiliated television station in Amarillo, Texas, USA. The station is owned by Mission Broadcasting, and operated by Nexstar Broadcasting Group, Inc. alongside NBC affiliate KAMR-TV (channel 4). KCIT's transmitter is located in Amarillo. Syndicated programming on KCIT includes: Two and a Half Men, My Name Is Earl, Friends, and The Insider.

The station was acquired by Mission Broadcasting after they bought KCIT and KCPN-LP from Wicks Broadcast Group in 1999. This station operates a shared services agreement with Nexstar Broadcasting's station, KAMR-TV.

On March 11, 2001 the station debuted a nightly 9PM newscast titled Fox14 News @ 9, produced by KAMR. For a time, the station also carried a weekday morning newscast.

On January 15, 2008 KCIT replaced the KAMR-produced newscast with its own one-hour newscast at 9PM. On Valentine's Day, KCIT began broadcasting This TV on digital subchannel 14.2. 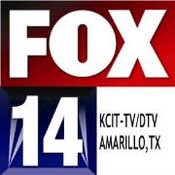 [1] This film, television or video-related list is incomplete; you can help by expanding it with reliably sourced additions.==External links==