KARK, virtual channel 4, is the NBC-affiliated television station for Central Arkansas that is licensed to Little Rock. Owned by the Nexstar Broadcasting Group, the station is sister to MyNetworkTV affiliate KARZ-TV (channel 42) and the two share studios on West Capitol Avenue in Downtown Little Rock one block east of the Arkansas State Capitol.

It broadcasts a high definition digital signal on UHF channel 32, using its former analog channel assignment of 4 as its virtual channel via PSIP, from a transmitter on Shinall Mountain near the Chenal Valley section of the city. On cable, the station is available on Comcast channel 5 in standard definition and digital channel 232 in high definition.

This station is Little Rock's second oldest having started on April 15, 1954. KATV was the first beating KARK to the airwaves by almost five months. In 1966, its original owners sold the station to Mullins Broadcasting, the owner of KBTV (now KUSA-TV) in Denver. When John C. Mullins (owner of the company) died in 1970, the Mullins estate sold both stations in 1972 to Combined Communications which merged with the Gannett Company (which, ironically, currently owns rival station KTHV) seven years later. In 1983, Gannett sold KARK to Southwest Media, a subsidiary of United Broadcasting, a one-time owner of WMUR-TV in Manchester, New Hampshire which also owned KDBC-TV in El Paso, Texas and WTOK-TV in Meridian, Mississippi.

In 1988, United Broadcasting sold off all of its stations with KARK going to Morris Multimedia. In 2003, Morris Multimedia sold KARK and WDHN in Dothan, Alabama to Nexstar who eventually consolidated most sports operations from KARK with those of its sister stations in Northwest Arkansas: NBC affiliate KNWA-TV and Fox affiliate KFTA-TV. The two NBC affiliates additionally share certain news resources with some reports filed by KNWA personnel occasionally used during KARK broadcasts. Since 2007, the two stations have also co-produced a daily newscast at Noon Monday through Friday, Arkansas at Noon, with news anchors in Little Rock and Fayetteville.

In October 2008, Nexstar announced that it would purchase MyNetworkTV affiliate KWBF from Equity Media Holdings for $4 million. This purchase was granted Federal Communications Commission (FCC) approval on December 23 of that year. However, although the purchase was to have been completed at the end of January 2009, its consummation was ultimately delayed nearly a month and a half until March 12. In the interim, Nexstar took over the operations of KWBF through a time brokerage agreement.

As of February 1, KWBF changed its calls to KARZ-TV and began airing an hour-long prime time newscast at 7 p.m. that is produced by KARK. MyNetworkTV programming airs one hour later (from 8 to 10 p.m.) than most other Central Time Zone affiliates. KARZ may also take on the responsibility as an alternate NBC affiliate by airing that network's programs when KARK cannot do so such as during a breaking news emergency. Their broadcasts became digital-only as of February 17, 2009.[1] The station's current "4" logo is similar to that of fellow NBC affiliate WSMV in Nashville, Tennessee.

Outside of local newscasts, the station produces Talkin' Outdoors at the Corner Café, which airs immediately after Today on Saturday mornings, is produced by KARK and is a special interest program showcasing outdoor recreation in cooperation with the Arkansas Game & Fish Commission.

KARK made national news in early 2006 by declining to air the NBC program The Book of Daniel. The station's General Manager Rick Rogala at the time issued two statements regarding the issue. The first issued January 4, 2006 stated: "Our relationship with NBC always provided for the right to reject programming. I am reaffirming that right to let them know I will not allow them to make unilateral decisions affecting our viewers." The statement continued: "If my action causes people in our community to pay more attention to what they watch on television, I have accomplished my mission." [2]

Two days later a second statement was released citing concerns about FCC rules regarding obscenity: "My first obligation to my station is to protect the license granted by the FCC. Current regulations could subject this station to severe punishment, up to and including revocation of our license if even a single person's objection to the FCC found material broadcast by our station to be indecent or obscene. Subsequent viewing of the material within The Book of Daniel leaves me no choice but to do my job and uphold the standards of our community." In part because of KARK's pre-emption of the series, along with other affiliates, combined with low ratings in general for the series, the program was cancelled after three episodes and finished its run streaming on NBC.com. KWBF (the future KARZ) instead aired the series after The WB's Friday night schedule.

For many years, KARK was the top-rated station for news in Little Rock. However, its newscast ratings plummeted in the mid-1990s as ABC affiliate KATV took the lead in the market. Even with the decrease, KARK remained in second place through most of the latter half of the 1990s then fell to third for a brief period in the early-2000s. This station has since regained many of its viewers and is a very competitive television station today. A significant aspect of its broadcasts today is emphasis of Arkansas-oriented content over national stories.

In recent years, due to NBC's prime-time struggles in the Nielsen Ratings, KARK's newscasts have remained in third place for the most part although close enough to remain competitive with KATV and KTHV.

4WARN Weather Team/Your Weather Authority KARK is one of the few television stations in the U.S. in which the chief meteorologist is not seen on the weeknight newscasts.

Sports team (based at KARK)

Razorback Nation (based at KNWA/KFTA) 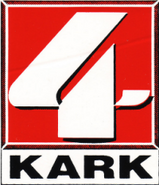 Retrieved from "https://annex.fandom.com/wiki/KARK-TV?oldid=398077"
Community content is available under CC-BY-SA unless otherwise noted.