WUPL, My54, is the My Network TV affiliate for the Greater New Orleans, Louisiana area. It is licensed to the New Orleans suburb of Slidell. It is currently owned by the Belo Corporation along with sister station WWL-TV. It broadcasts on virtual channel 54. Syndicated programming on WUPL includes: Tyler Perry's House of Payne, Judge Jeanine Pirro, America's Funniest Home Videos, and The Early Show.

The station signed on in June 1995 as the market's UPN affiliate. Along with UPN programming, the station ran a general entertainment format, offering vintage off-network sitcoms, talk shows, court shows, and other syndicated shows.

WUPL was sold to Cox Enterprises in 1997, which in turn sold the station to Paramount Stations Group, which made WUPL a UPN owned-and-operated station.

Viacom, Paramount Stations Group's parent company, merged with CBS in 2000. Despite Viacom's ownership of WUPL, the market's CBS affiliation remained on WWL-TV, the highest-rated television station in New Orleans and CBS' strongest affiliate for over 20 years. However, since early 2005, WUPL has been broadcasting CBS's The Early Show (which WWL-TV pre-empts). WUPL also offers The Daily Buzznewscast weekday mornings starting at 5 AM for two hours before The Early Show, and both shows are under the umbrella title My Morning News.

Viacom briefly considered buying WWL-TV, thus creating a duopoly with WUPL. However, after Belo turned down Viacom's offer, Viacom decided instead to sell WUPL to Belo. WUPL and WWL-TV became sister stations under Belo ownership. Before then, WUPL was one of two network O&O's in New Orleans at the time (Tribune-owned WNOL was the other).

On February 9, 2006, CBS Corporation (which took over WUPL after Viacom split into two companies) filed a law suit against Belo Corp. over the failure to close on the sale of WUPL. The deal was slated to close by the end of 2005, but skidded to a halt when Hurricane Katrina devastated the market in late August. [2] On February 26, 2007, Belo announced that they would go forward with the purchase of WUPL from CBS.[1] A Belo press release also said the sale - which has already received FCC approval - "settles litigation between Belo and CBS over the purchase that arose after Hurricane Katrina."[2] At that time, Belo closed on WUPL, and later acquired its low-power repeater,WBXN-CA on channel 18 in New Orleans (previously a separate station, affiliated with The Box and later MTV2) on April 20, 2007. In mid-April 2007, Belo moved WUPL's operations into the WWL-TV facility. The URL for the former WUPL website, WUPLTV.com, now serves as a redirect to the WWL-TV website.

On January 24, 2006, the UPN and WB networks announced they would merge. The newly combined network would be called The CW, the letters representing the first initial of its corporate parents CBS (the parent company of UPN) and the Warner Bros. unit of Time Warner. The merger would take effect on-the-air in September 2006, and former WB stationWNOL was announced as the CW's New Orleans affiliate.

Even though the lawsuit with Belo Corp at the time (but has since been settled) provided some doubt, it was announced that WUPL would become an affiliate of MyNetworkTV on July 12. Since News Corporation owns Fox and MNTV, CBS Corporation, which owned WUPL at the time of MNTV's launch, originally relented on allowing any of its current UPN affiliates to affiliate with the new network because News Corp's UPN stations were left out of the deal to affiliate with The CW.

WUPL may take on the responsibility of airing CBS prime-time shows when WWL-TV is not able to such as in a news-related emergency.

My54 Eyewitness News at 9

On June 4, 2007, WUPL began airing a 9 pm newscast called "My54 Eyewitness News at 9" to compete against WVUE's "Fox 8 News at 9" and WGNO's "ABC26 News at 9:00 PM onNew Orleans' CW38".[3] It is produced by WWL-TV and features the anchor lineup of Channel 4's "Eyewitness News Nightwatch," which airs at 10 pm on that station. Unlike the 9 p.m. newscast on WVUE, the one on WUPL currently airs only on weeknights. WGNO cancelled the newscast on WNOL after the June 4, 2010 edition due to dismal ratings. By that time, the newscast on WUPL had passed the WNOL newscast for distant second behind WVUE.

As of September 2010, this newscast is broadcast in 16:9 widescreen standard definition—the same format as the newscasts on sister station WWL-TV. 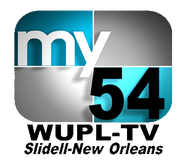 Retrieved from "https://annex.fandom.com/wiki/WUPL?oldid=398246"
Community content is available under CC-BY-SA unless otherwise noted.