WUPA, channel 69, is a television station in Atlanta, Georgia. An owned and operated station of the The CW Television Network, it identifies itself as "CW 69". It is owned by by CBS Corporation, which is half-owner of The CW. Founded August 22, 1981, the station is broadcast locally in high-definition on channel 43 (virtual channel 69.1). Originally atop the Westin Peachtree Plaza Hotel, Atlanta's tallest building at the time, it now transmits from another site further east.

The station first began operations on August 22, 1981, under the call letters WVEU. It was originally owned by locally-based BCG Communications. Initially, its programming line-up consisted of business news during the day and VEU, a subscription TV service during the evenings and weekends. By 1982, it was running subscription TV most of the day. In 1984, WVEU dropped "VEU" programming and turned towards a general entertainment format. In 1984 and 1985 the station branded was "Atlanta's Music Video Channel" and had music videos and VJs. The station later added cartoons, low budget syndicated shows, preempted CBS and NBC programs and mini-blocks music videos to its line-up. However, better programming was difficult to come by, as competitors WTBS and WATL picked the best choices clean. Another problem was the station's signal, which was painfully weak at the time; most viewers needed cable to watch it. The going only got more difficult when WANX-TV (channel 46), previously a largely religious station, switched to general entertainment as WGNX.

Atlanta was not big enough at the time to support four independent stations. Realizing this, WVEU began running Home Shopping Network for about fifteen hours a day in 1986. HSN began talks to to buy the station, but the deal fell through in 1987. Instead, HSN arranged for WNGM-TV in Athens (channel 34, now WUVG-TV) to air HSN programming 24 hours a day. From 1989 to 1994, WVEU primarily aired Home Shopping Network programming, but also aired some religious shows, infomercials, NBC and ABC programs preempted by WXIA-TV and WSB-TV and a few syndicated shows. It continued to struggle in the ratings.

On May 22, 1994, New World Communications, by then the owners of Atlanta's longtime CBS affiliate, WAGA, announced an affiliation deal with the Fox Broadcasting Company in which most of New World's stations would become affiliates of the network. This deal came after Fox won the rights to air NFC football games. Because of this, Fox decided to sell its existing O&O in Atlanta (and the market's original Fox affiliate), WATL. Meanwhile, CBS was left looking for an affiliate in the 9th-largest market. First, it approached WSB and WXIA—but neither of those stations were interested. Also not interested at first were WATL and Atlanta's other independent, WGNX—the latter, then owned byTribune Broadcasting, was slated to join The WB Television Network, which it co-owned with Time Warner -- while WATL was most likely to become Atlanta's affiliate for the United Paramount Network (UPN), which was co-owned by Paramount Pictures and Chris-Craft Industries. Almost out of desperation, CBS agreed to buy WVEU in October, even though the station had the lowest ratings and the weakest signal of all of Atlanta's full-power stations. However, at the 11th hour Tribune Broadcasting relented and agreed to allow WGNX to join CBS, while WATL would become the WB affiliate. WGNX (which later became WGCL-TV) sold WVEU many of its syndicated cartoons (such as Bots Master, Superhuman Samurai Syber-Squad, Transformers: Generation 2, Conan the Adventurer and Biker Mice from Mars) as well as Disney Afternoon cartoons (such as TaleSpin, Darkwing Duck, Goof Troop, Bonkers, Gargoyles and Aladdin) along with off network classic sitcoms.

WVEU became one of the charter affiliates of UPN in January 1995. That summer, Paramount Stations Group, a subsidiary of Viacom (which had purchased original parent Paramount Pictures not long after UPN was founded), bought the station and changed its call letters to WUPA to reflect its new status as an O&O and significantly boosted the station's signal.

The affiliation with UPN ushered in a new era for WUPA. With a stronger signal and the syndicated shows acquired from WGNX, it became a factor in the Atlanta ratings for the first time ever. For most of UPN's run, WUPA was the network's fourth strongest station.

The station returned to CBS hands when CBS merged with Viacom in 2000. However, the station remained affiliated with UPN (due to WGNX/WGCL having higher ratings and a better channel position than WUPA), and CBS would keep the station after Viacom spun off the cable & movie assets and adopted the CBS Corporation moniker in 2006.

Over the years, more first run syndicated shows were added to the station's schedule. When the Disney cartoon block ended in 2003, WUPA stopped running kids programming except for the weekends. It picked up the Fox Box, later 4Kids TV, from WHOT-TV (now WUVG-DT) in 2002 when that station was sold to Univision. Channel 69 continued to air Fox's Saturday morning children's block until just before The CW began airing. Thereafter, 4Kids TV was not picked up by any Atlanta station until it went off the air in December 2008. (The successor block to 4Kids TV, the Weekend Marketplace infomercial block, is currently aired on WATL.)

On Monday, April 5, 2004, the station launched "UPN Atlanta News at Ten", a 10pm newscast produced by WXIA-TV as well as a live program at 10:30pm titled "Atlanta Tonight". Both suffered in the ratings, and they were cancelled on Sunday, August 28, 2005. WXIA has since resumed a 10pm newscast after purchasing WATL in 2006.

On January 24, 2006, CBS and Time Warner announced they were "merging" their respective UPN and WB networks into The CW Television Network, effective September 2006. WUPA was selected as Atlanta's CW affiliate; however, WUPA retained its call letters. It would not have been an upset had WATL been chosen instead, however. CW officials were on record as preferring the "strongest" WB and UPN stations, and Atlanta was one of the few markets where the WB and UPN stations were both relatively strong.

In August 2006, WUPA updated their website, TV logo bug, and promos to incorporate their new TV moniker, The CW Atlanta.

In celebration of The CW coming to WUPA, the network produced a one-hour fashion and music program in partnership with Macy's and VIBE entitled, Beats, Style, & Flavor. The program was hosted by Eva Pigford from America's Next Top Model and V-103's Greg Street. The program first aired on September 7, 2006 and re-aired on September 17, the eve of The CW's launch.

In November 2006, FTVLive revealed that WUPA's master controls would be moved to sister CW affiliate WGNT in Norfolk, Virginia. CBS Corporation since confirmed that WUPA and its Tampa Bay sister station WTOG would be hubbed out of WGNT, with layoffs expected from both stations; this came after CBS denied that such would happen ([1]). On January 29, 2008, WUPA changed their branding from CW Atlanta to CW69. WGNT was sold to Local TV, the owner of that market's CBS affiliate WTKR, in August 2010. CBS Television Stations is currently winding down operations at the Norfolk hub; once that is completed, both WUPA and WTOG will once again handle their own master controls in-house.

The station produces a local public affairs program called Focus Atlanta, which is hosted by Keisha Williams and features topics of community interest.

WUPA sponsors a local theater venue in a promotional partnership with Rival Entertainment at 17th and West Peachtree Streets in downtown Atlanta. Called The CW Midtown Music Complex, it features three performance spaces within the same space; "Center Stage", "The Loft", and "Vinyl".

On Sunday mornings, a kids block called Toonzai (formerly The CW4Kids), owned by 4Kids Entertainment, CBS Corporation and Time Warner, airs on WUPA. On most other states in the USA, It airs on Saturdays. 4Kids Entertainment previously programmed Fox Box/4Kids TV from 2002 to 2008.

Recently, rumors have spread about CBS Corporation (which split from Viacom in 2005) purchasing WGCL, making it sister to WUPA. Meanwhile, other rumors persist about CBS selling WUPA to either Meredith Corporation (current owners of CBS affiliate WGCL) or Cox Television (owners of ABC affiliate WSB). With Meredith and WGCL assuming operations ofWPCH/channel 17, the Cox purchase may seem to be the more valid possibility.

As A CBS-owned station, WUPA uses the standard masthead on its website of CBS and name of the city. The masthead uses ".net" in its domain address to prevent confusion with WGCL's "CBS Atlanta.com" (all other CBS-owned stations use ".com" on their site mastheads) but the site itself uses the CBS standard cbslocal.com address.

The station fills the sidebars of its widescreen signal with grey instead of black, which prevents most widescreen TV sets from stretching the picture to fill the screen. This keeps the picture in the proper aspect ratio, since the Federal Communications Commission (FCC) failed to make the Active Format Descriptor mandatory.[citation needed]

After the analog shutdown was complete on June 12, 2009, WUPA remained on digital channel 43 as channels 52 to 69 were removed from the U.S. TV bandplan for other services. 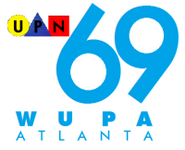 Retrieved from "https://annex.fandom.com/wiki/WUPA?oldid=434685"
Community content is available under CC-BY-SA unless otherwise noted.