WTVD, channel 11, is an owned-and-operated station of the Walt Disney Company-owned ABC television network, licensed to Durham, North Carolina. The station serves the areas of Durham, Raleigh, Chapel Hill, and Fayetteville, known as the Triangle. WTVD's main studios, offices and newsroom are located in downtown Durham, along with additional studio facilities in both Raleigh and Fayetteville. The station's transmitter is located in Garner, North Carolina.

The station's signal is multiplexed:

On June 12, 2009 at 12:30 p.m., WTVD remained on channel 11 when the analog to digital conversion was completed. On September 23, 2009, the station filed an application to the Federal Communications Commission to increase its effective radiated power from 20.7 to 45 kilowatts. [1]

In 1952, two rival companies each applied for a license to build a television station in Durham on the city's newly allotted VHF channel 11 – Herald-Sun Newspapers (publishers of the Durham Morning Herald and the Durham Sun as well as the owners of radio station WDNC) and Floyd Fletcher and Harmon Duncan, the then-owners of WTIK radio. In December 1953, the two sides agreed to join forces and operate the station under the joint banner Durham Broadcasting Enterprises. Eight months later, on September 2, 1954, WTVD began broadcasting with a black-and-white film of the Star Spangled Banner. It was originally a primary NBC affiliate, with a secondary ABC affiliation. Its initial studios were located in a former tuberculosis sanitorium at 2410 Broad Street, with a transmitter located atop Signal Hill in northern Durham County. Channel 11 is the Triangle's oldest surviving television station, having signed on a few months after CBS affiliate WNAO-TV (channel 28).

On May 22, 1957, the station's original owners sold their interest in WTVD to Albany, New York-based Hudson Valley Broadcasting Company, owners of WCDA-TV (now WTEN), to form Capital Cities Television Corporation (predecessor of Capital Cities Communications). Around 1958, WTVD built a 1,500-foot (460 m) tower at its present transmitter site in Auburn to better serve the market. That same year, the station first began broadcasting in color, although it would be until 1966 before the same was true for local programming.

WRAL-TV (channel 5), owned by local firm Capitol Broadcasting Company, started in 1956 and took over as the Triangle's NBC affiliate. CBS then dropped its affiliation with the under-performing WNAO-TV and gave it to WTVD. During the late 1950s, the station was also briefly affiliated with the NTA Film Network.[2] When WNAO-TV stopped broadcasting in 1959 due to financial difficulties, channel 11 began sharing ABC programming with WRAL-TV.

After WRAL took the ABC affiliation full-time in 1962, WTVD was forced to shoehorn CBS and NBC programming onto its schedule. This was a very unusual arrangement for what was then a two-station market. Although the market got a third commercial station six years later when channel 28 returned to the airwaves as WRDU-TV (now WRDC), WTVD "cherry picked" the most popular CBS and NBC programs, leaving WRDU with the lower-rated shows from both networks, until 1971. At that time the FCC, intervening on behalf of WRDU's owners and in the interest of protecting the development of UHF, ordered WTVD to select one network. Channel 11 decided to go with CBS full-time, allowing WRDU to become an exclusive NBC station (it is now affiliated with myNetworkTV).

In 1978, WTVD attempted to expand its broadcast coverage to the Fayetteville area, which had been without a television station of its own for nearly two decades. Its studios were relocated to their current location on Liberty Street in downtown Durham on a parcel of land it shares with the Durham County Library; it also built its current 2,000-foot (610 m) tower in Auburn. A fire on March 4, 1979 caused extensive damage to the newly built studio building; however, the newsroom and a number of other key components had been rebuilt within a month. By that time, much of WTVD's operations had returned to normal, although it had resorted to temporary setups during the interim such as holding the newscasts in one of the meeting rooms that survived the aforementioned crisis unscathed.

On March 18, 1985, WTVD's owner, Capital Cities, announced it was purchasing ABC. Five months later, on August 4, 1985, WTVD swapped affiliations with WRAL-TV and became an ABC affiliate. At that time, WTVD and WRAL-TV joined the small list of stations that have held primary affiliations with all of the "Big Three" networks. The transaction was finalized on January 3, 1986, making WTVD an ABC-owned station, the first network-owned television station in North Carolina. In 1996, the Walt Disney Company acquired Capital Cities/ABC.

On the night of December 6, 1991, a helicopter carrying a pilot and three WTVD employees from a high school football game in Wilmington, North Carolina crashed, killing three of the four members on board.[3] Sports reporter Tony Debo was the only survivor.[4]

On April 30, 2000, a dispute between Disney and Time Warner Cable forced WTVD off cable systems within the Raleigh-Durham-Fayetteville market for over 24 hours during the May sweeps period. Other ABC stations in markets served by Time Warner Cable, such as New York City, Los Angeles, and Houston, were also affected by the outage as well before the FCC forced TWC to restore service to those areas on May 2. [1] In July 2010, Disney announced that it was involved in another carriage dispute with Time Warner Cable which involved four ABC owned-and-operated stations (including WTVD), Disney Channel and the networks of ESPN. If a deal was not in place, the entire Disney cluster would've been removed from Time Warner and Bright House cable systems across the country. On September 2, 2010, Disney and Time Warner Cable reached a long-term agreement to keep the Disney family of channels on it's systems.

On DirecTV, WTVD is carried in two North Carolina counties out of market in Alamance and Northampton Counties.

For most of the last four decades, WTVD has been a solid second in ratings across the market. This is in contrast to most of its ABC stablemates, which dominate their markets' news ratings.

Principal anchor Larry Stogner has been with the station since 1976 and a weeknight anchor continuously since 1982. His co-anchor for much of the 1990s, Miriam Thomas, abruptly left WTVD after nineteen years in November 2001. Notable former members of WTVD's news staff include musicians John Tesh and John D. Loudermilk, ESPN personality Stuart Scott, as well as former Good Morning America co-host David Hartman.

From 1973 until 1985, WTVD used the Eyewitness News name for its newscasts though its format was very similar to the Action News format pioneered by sister station WPVI-TV in Philadelphia. The arrangement was similar to then-sister station WKBW-TV in Buffalo, New York. During this time, both stations used the same theme song, Move Closer to Your World, and the same opening sequence. WRAL was also using the Action News name during that time period. It called its newscasts simply WTVD 11 News for a time after the affiliation switch in 1985. WTVD called itself NewsChannel 11 from 1993 until 2000 when it changed back to Eyewitness News. WTVD was among the last stations to use the Cool Hand Luke Tar Sequence theme in its broadcasts (which was also used on WRAL for a period in the 1970s). However, the station debuted the theme soon after the Capital Cities/ABC merger and retired it in 1993. Like sister stations WABC, KABC, and KGO-TV, the theme was used only in the opens.

On June 26, 2006, WTVD debuted a new prime time newscast for WB affiliate WLFL entitled Eyewitness News at 10 on WB 22. This happened after WLFL's owner, Sinclair Broadcast Group, ended the controversial News Central format on its stations. This newscast runs directly against the WRAL-produced show on WRAZ. On September 17 concurrent with that station's official affiliation switch to The CW, the newscast changed its name to Eyewitness News at 10 on CW 22. On April 21, 2008, WTVD became the second television station in the Triangle behind WRAL and the eighth ABC-owned station to produce its newscasts in HD.

It subscribes to AccuWeather for the weather portion of the broadcasts. It operates its own weather radar, called "First Alert Doppler XP", at its transmitter. There are live streams offered on its website of every newscast (except the weeknight WLFL show) and "Eyewitness News Now". In addition to its main studios, the station operates bureaus in Fayetteville on Green Street and Raleigh on Fayetteville Street. WTVD has a fleet of regular news vans and trucks as well as a yellow Toyota FJ Cruiser which is known as "Breaking News One". WTVD also leases a helicopter which it refers to as "Chopper 11 HD".

WTVD 11 Together station ident from late 1982

WTVD 11 Together station ident from late 1983 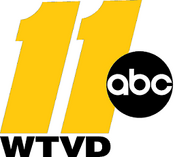 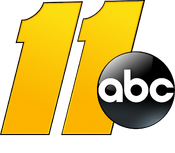 WTVD ABC11 Eyewitness News This Morning 6AM Weekday - Coming Up bumper from January 8, 2018

WTVD ABC11 Together - Victory Ride To Cure Cancer PSA promo for May 19, 2018
Add a photo to this gallery

Retrieved from "https://annex.fandom.com/wiki/WTVD?oldid=391663"
Community content is available under CC-BY-SA unless otherwise noted.