WMAQ-TV, channel 5, is an owned-and-operated television station of the NBC Television Network, located in Chicago, Illinois. WMAQ-TV's main studios and offices are located within the NBC Tower in the Streeterville neighborhood, with an auxiliary street-level studio on the Magnificent Mile at 401 N. Michigan Avenue, and its transmitter is atop the Willis Tower. WMAQ-TV is a sister station to WSNS-TV (channel 44), affiliated with the Spanish-language network Telemundo; and Comcast SportsNet Chicago.

The station signed on October 8, 1948, as WNBQ, the last of Chicago's four commercial VHF stations to launch, and the third of the five original NBC owned-and-operated stations, three weeks ahead of WNBK (now WKYC-TV) in Cleveland. Eight years later, it became the first station in the world to broadcast all of its programs in color. Though NBC had long ownedWMAQ radio (670 AM, frequency now occupied by WSCR), it did not change the TV station's call letters to WMAQ-TV until August 31, 1964.[1] The calls of its sister radio station were initially assigned by the government, but went on to form the phrase "We Must Ask Questions," which the radio station took on as its motto in the 1920s.

WMAQ-TV originated several programs for the NBC television network from its studios in theMerchandise Mart during the 1950s, including Kukla, Fran, and Ollie, featuring Burr Tillstromand Fran Allison; Garroway at Large, starring Dave Garroway; and "Studs' Place," hosted by Studs Terkel. Television critics referred to the broadcasts - often low-budget with few celebrity guests but a good deal of inventiveness - as examples of the "Chicago School of Television."[2][3]

WMAQ-TV gained fame for its newscasts during the 1960s, anchored by Floyd Kalber, John Palmer, Jim Ruddle, and Jorie Lueloff, with weatherman Harry Volkman (later of WBBM-TV, WGN-TV and WFLD), sports reporter Johnny Morris, and commentator Len O'Connor. Though its role as a program provider to NBC diminished in the 1960s, WMAQ-TV gathered and distributed more than 200 feeds per month of news footage from overseas and the central United States to NBC News.[4]

In 1975, Jane Pauley, later of NBC's Today Show, briefly co-anchored WMAQ-TV's 10 p.m. news with Kalber. Carol Marin joined WMAQ-TV in 1978. Ron Magers followed in 1981. Magers and Deborah Norville (later host of Inside Edition) co-anchored the station's hour-long 4:30 p.m. newscast during the 1980s, and Magers and Marin co-anchored WMAQ-TV's 10 p.m. newscast. On October 1, 1989, the station began broadcasting from new studios in the NBC Tower, after vacating the Merchandise Mart during the summer. WMAQ-TV's newscast ratings overtook those of WBBM-TV in the 1980s, but the station could not dethrone ratings leader WLS-TV during the period.

On February 26, 2004, WMAQ-TV garnered national attention when Katie Couric, Al Roker, and Lester Holt hosted the Today Show on Cityfront Plaza to debut the station's streetside studio. Named "Studio 5", it is the first of its kind in Chicago. The morning and evening newscasts are taped here, while the 10 o'clock news is taped at the studios in the tower.

On January 14, 2008, WMAQ-TV became the second television station in Chicago after WLS to broadcast news in high definition, although most remote field footage remains in 16:9 widescreen standard definition.

As part of the analog television shutdown and digital conversion, WMAQ-TV shut down its analog transmitter on June 12, 2009, and continued to broadcast its pre-transition digital channel 29. Digital television receivers display WMAQ-TV's virtual channel as 5 through the use of PSIP.

From June 13 to July 12, 2009, WMAQ-TV simulcasted many of its newscasts as a contributor to WWME-CA's analog lifeline service for the Chicago area, an "unprecedented" four-station partnership. The "lifeline" programming on analog Channel 23 included WMAQ's weekday morning news from 4:30 a.m. to 7 a.m. and weeknights at 6 p.m., Saturdays at 6 a.m., 9 a.m. and weekend nights at 5 p.m along with WGN-TV (Channel 9)'s 9 p.m. newscasts. The lifeline continued only as a simulcast of entertainment programming from WWME's sister stationWCIU-TV until January 2011, when it was switched to a simulcast of WCIU's The U Too subchannel.[10][11]

Currently, WMAQ broadcasts a total of 26 hours of local news per week (with 4½ hours on weekdays and three hours each on Saturdays and Sundays). Unlike most NBC stations in the Central Time Zone, WMAQ does not carry a newscast in the weekday midday time period.

Since January 12, 2009, WMAQ and Fox affiliate WFLD have shared a news chopper and the footage taken from it; this agreement has reportedly paved the way for a larger pooling effort between the two stations.[12]

After years in second place behind WBBM-TV and, later, WLS-TV in the 10 p.m. news race, at the conclusion of the November 2009 Nielsen Ratings sweeps period, WBBM-TV's 10 p.m. newscast overtook WMAQ-TV for second place for the first time in many years, largely due to the low ratings of the latter station's lead-in The Jay Leno Show. WLS-TV continues to dominate the local newscast ratings in the Chicago media market.[13] It has since regained second place at 10 p.m. although closer to third-place WBBM-TV than to WLS-TV. However in the November 2010 sweeps period, WMAQ's 10 p.m. newscast slipped back to third behind WBBM-TV in that time slot (and fourth among Chicago's late night newscasts) although WMAQ continues to run second in other time slots.

WMAQ achieved notoriety in 1997 when the station, in an effort to boost its newscast ratings, hired Jerry Springer as a commentator.[14] At the same time, the station adopted a more tabloid news format by bringing in Joel Cheatwood. Previously, Cheatwood was known for establishing fast-paced tabloid newscasts at WSVN in Miami and WHDH-TV in Boston.

Though Springer was once a two-term mayor of Cincinnati before becoming a news anchor for that city's NBC affiliate WLWT, his association with his infamous talk show (which, until 2009, was broadcast from WMAQ's NBC Tower studios, and is now distributed by NBC Universal) led to the belief that the newscast was being dumbed down. There were a handful of Springer supporters; nevertheless, the incident triggered a lot of negative publicity, both locally and nationally. Carol Marin and Ron Magers, resigned in protest. News broadcasts at that time originated from a studio that opened onto the station's newsroom. As Marin signed off her last newscast, station personnel stood en masse in the newsroom behind her in a symbolic show of support for her decision to resign. The station saw a drop in its ratings. Springer only made two commentaries before he resigned, feeling unhappy with the criticism he received.[15][16]

Magers wound up at rival WLS-TV, where he still is today. Marin joined rival WBBM-TV while contributing reports at CBS before returning to WMAQ in 2004 as a special correspondent.

On July 10, 2007, Amy Jacobson negotiated her exit with WMAQ, after being videotaped in a bikini with her two sons at the home of Craig Stebic; the video was obtained by rival station WBBM. Craig's wife Lisa was missing and had not been found as of that date. The incident raised the issue whether Jacobson crossed a journalistic ethical line in being friendly with a subject of the story. Jacobson reported at WMAQ for the previous 10 years.[17] The video of her at Craig Stebic's home was either taken by or given to WBBM-TV, which has the entire six minute video on its website.

In the February 2011 Nielsen local news ratings, WMAQ ranked in third place overall in late news with a 5.5 rating share, dropping substantially from the 6.8 share it scored in February 2010 that was propelled by a lead-in from the 2010 Winter Olympics in Vancouver. WMAQ had the second-lowest lead-in number among all news stations in the market with a 4.7 lead-in share (WGN-TV's primetime lead-in for its late newscast was the lowest, scoring a 2.2 rating lead-in, though its 9 p.m. newscast remained strong).[18]

NOTE: Sports anchors cycle. There is not a set sports "anchoring" schedule.

WMAQ-TV An NBC Station ident from 1964 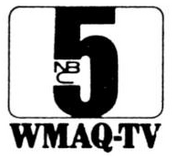 WMAQ Channel 5 There, Be There promo from Fall 1983

WMAQ-TV The Facts of Life - Wednesday ident from late 1984

WMAQ Channel 5 ident from 1985 - Which starts a newscast

WMAQ Channel 5 - Proud To Help: The Chicago Lighthouse For The Blind PSA promo from early 1986

WMAQ Channel 5 ident from 1986 - Which begins a newscast

WMAQ NBC 5 News - NBC 5 Weather Team: Tornado Ready: Learn What You Can Do To Stay Safe promo from April 2013

WMAQ NBC5 News Today - Up To The Minute, The Minute You're Up - Weekday Mornings promo from early Summer 2014

Retrieved from "https://annex.fandom.com/wiki/WMAQ-TV?oldid=397786"
Community content is available under CC-BY-SA unless otherwise noted.